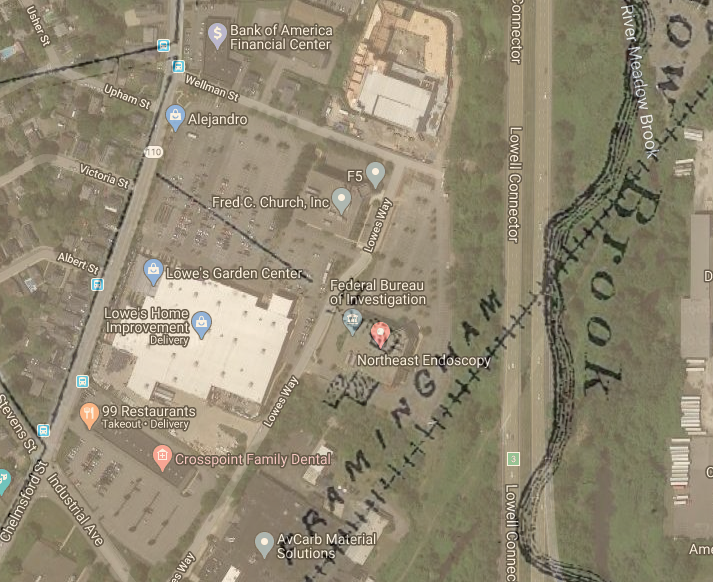 The Poor Farm buildings are in the center of the old map.

See the David Rumsey Map Collection website for an interactive version of these 2 maps.

When on the website, slide the slider bar on the upper right side of the webpage to change the opacity of the map.

The Poor Farm buildings are in the lower left (South West) section of the old map, near Lowe's on the new map.

Also see the MAPS section below

See Transcription of the Howard (December 18, 1834) deed and a Word doc of the transcription below.

[page 132] Know all men by these presents that I Joseph Peirce of Lowell in the County of Middlesex and Commonwealth of Massachusetts yeoman in consideration five thousand and five hundred dollars to me paid by the Inhabitants of the Town of Lowell aforesaid the receipt whereof I do hereby acknowledge do hereby grant, sell, and convey unto the said Inhabitants their successors and assigned a certain farm containing one hundred and fifty acres be the same more or less situated partly in said Lowell and partly in Chelmsford in said County and lying on each side of the Middlesex Canal and bounded as follows viz. beginning at stakes and stones by wall on the east side of the old road leading from Simon Parker’s to the middle of Chelmsford at land of said Parker thence easterly by said Parker’s land across the new County road from Lowell to Chelmsford to a ditch in the River meadow thence southerly by land of said Parker and land of Henry Coburn along the center of said ditch to land late of Nathaniel Howard thence westerly and southerly by said Howard’s land in said ditch and by a wall to the end of a ditch at Loammi Chamberlain’s land thence southerly along the centre of said ditch by land of said Chamberlain land of William Fletcher land of said Howard and the dower of the widow Henry Spalding thence southerly of southwesterly by

[page 134] and thence northerly on said old road to the place of beginning with all the privileges and appurtenances whatever belonging to said premises saving and excepting however herefrom the rights and easements in any public of private way[?] or upon the premises above described and also excepting herefrom said Canal and the easements and rights belonging to said Canal. The above Premises were devised to me by the last will and testament of my late father Silas Peirce deceased and are all the real estate whereof I am seiged[?] in the said towns of Lowell and Chelmsford excepting a Pew in the Chelmsford meeting house. To have and to hold the above granted premises to the said Inhabitants their successors and assigns to their use and behoof forever and I for myself my heirs executors and administrators do covenant with the said Inhabitants their successors that I am lawfully seiged[?] in [?] of the aforegranted premises that they are  free of all incumbrances that I have good rights to sell and convey the same to the said Inhabitants and that I will and my heirs executors and administrators shall warrant and defend the same to the said Inhabitants their successors and assigns forever as against the lawful claims and demands of all persons. In witness whereof I the said Joseph Peirce with Nancy my wife who hereby releases all right to have or claim dower in said described premises have hereunto set our hands and seals this seventeenth day of April in the year of our Lord one thousand eight hundred and thirty three. Signed sealed and delivered in presence of us] Joseph Peirce (seal) Nancy Peirce (seal)
Elisha Glidden} Ross C. Stevens} Middlesex [?] April 17, 1833The above named Joseph Peirce personally appeared and acknowledged the above instrument to be his free act and deed before me Elisha Glidden Just of Peace.

Report of Committee to purchase Poor Farm May 6, 1833

Report of Committee to purchase Poor Farm May 6th 1833

The Committee appointed in September last “to purchase a suitable place on which to erect buildings for the accommodation of the Poor of the Town & when such purchase is made to make a plan of said buildings & estimate the expense Thereof and upon the Town as soon as may be,” have attended to the service assigned them and now report,

That they have purchased of Joseph Pierce [Peirce] his homestead Farm containing by estimation one hundred & fifty acres situated in Lowell and Chelmsford & said Pierce has executed a Deed Thereof to the Town. The Committee have agreed with said Pierce that the Town shall pay Therefore Five Thousand and five hundred dollars in the following manner to wit, Two Thousand eighty three dollars and thirty three cents, when said Pierce surrenders The Possession of The Farm to The Town, Three Thousand at any time within five years from time The possession is given with Interest at five per cent per annum in payments not less than one Thousand dollars each; The residue of the purchase money to wit, four hundred sixteen dollars & sixty seven cents at the decease of Hannah Pierce, the widow of Silas Pierce deceased, the former owner of said farm, she having released her right of Dower Therein, and the Town further shall pay to said Hannah twenty five dollars I the month of April each year during her life. The Committee are not prepared at this time to report a plan of suitable buildings for the accommodation of the Poor, and an Estimate of the Expense Thereof but They are of Opinion, that the buildings on said Farm will accommodate the Poor for one or more years with some trifling repairs, and that it will not be necessary that the Town should incur any expense for buildings the present season.

The Committee appointed “to purchase a suitable site on which” to erect a building for the accommodation of the poor of the town and when such purchase is made to make a plan of said building and an estimate the expences thereof and report to the town as soon as may be having heretofore reported in part now make a further report,

The Houses in which the poor are now supported are small, old and in such decayed condition as to render any repairs thereon useless, the number of poor have greatly increased since the present establishment was provided and cannot much longer be made comfortable without a new Building. Your committee think expedient that the town should erect a Building on this farm for a Work House and for the accommodation of the Poor in the course of the ensuing year of ‘Brick or Stone’ to be slated 75 ft. in length 37 in Breadth 3 stories in front 2 in the rear to be not more than 8 ft each in height the expence exclusive of what may be done by the paupers is estimated at six thousand dollars. A plan of the Building is herewith submitted – there are now several passageways over and across the town farm claimed and now used by the owners of the meadow lots adjoining said Farm. A portion of said ways might be discontinued by purchasing four or five small lots of said meadow, the price of which it is believed would not exceed $300. Your committee are of opinion that it is expedient to purchase said lots as the Farm will be much improved by so doing.  As the town are now owing a large debt, your committee are of opinion that the town should raise by Tax a sum adequate for the purpose aforesaid before any expence is incurred

All of which is submitted by

Know all men by these presents that We Otis Howard and Samuel Howard both of Chelmsford in the county of Middlesex Yeoman and Hannah Howard of said Chelmsford, Widow in consideration of Twenty seven 19/100 dollars to us paid by the Inhabitants of the town of Lowell in said county the receipt whereof we do hereby acknowledge and do hereby give grant and convey unto the said Inhabitants a certain piece of land in said Lowell containing about one hundred and forty five square rods lying on the westerly side of River Meadow Brook so called and adjoining to the easterly side of the farm owned by said Inhabitants called the “poor farm” and thus bounded viz. Beginning at the northwesterly corner of the premises at said “poor farm” and at land this day conveyed by William Fletcher to said Inhabitants and thence running south seventy four degrees east about 26 rods to said river Meadow brook then southerly on said brook according to the course thereof about nine rods and seventeen lengths to land this day conveyed by the heirs of Henry Spalding to said Inhabitants then north about seventy five degrees west about nineteen rods and thirteen links on the land conveyed by said heirs [?] aforesaid to said “poor farm” and then northerly by said farm about six rods and nineteen links to the corner begun at with all easements rights of way and privileges whatever in to or over the same premises. To have and to hold the above granted premises to the said Inhabitants their successors & assigns to their use & behoof forever And we for ourselves our heirs, executors, and administrators do covenant with the said Inhabitants their successors & assigns that we are lawfully seized in fee of the aforegranted premises That they are free from all encumbrances; That we have good right to sell and convey the same to the said Inhabitants And that we will and our heirs, executors, and administrators shall warrant and defend the same to the said Inhabitants their successors and assigns forever, as against the lawful claims & demands of all persons in witness whereof we the said Otis Howard & Samuel Howard and being both unmarried and Hannah Howard have hereunto set our hands and seals this eighteenth day of December in the year of our Lord one thousand eight hundred and thirty four. Otis Howard (seal)

Signed, sealed & delivered in presence of us}

Middlesex as February 19, 1835. There the above named Otis Howard and Samuel Howard and acknowledged the above instrument [?] be their free act and deed Before Luther Lawrence Justice of the Peace. Middlesex [?] March 12 1835. Rec’d and Recorded by Wm. F. Stone Reg. 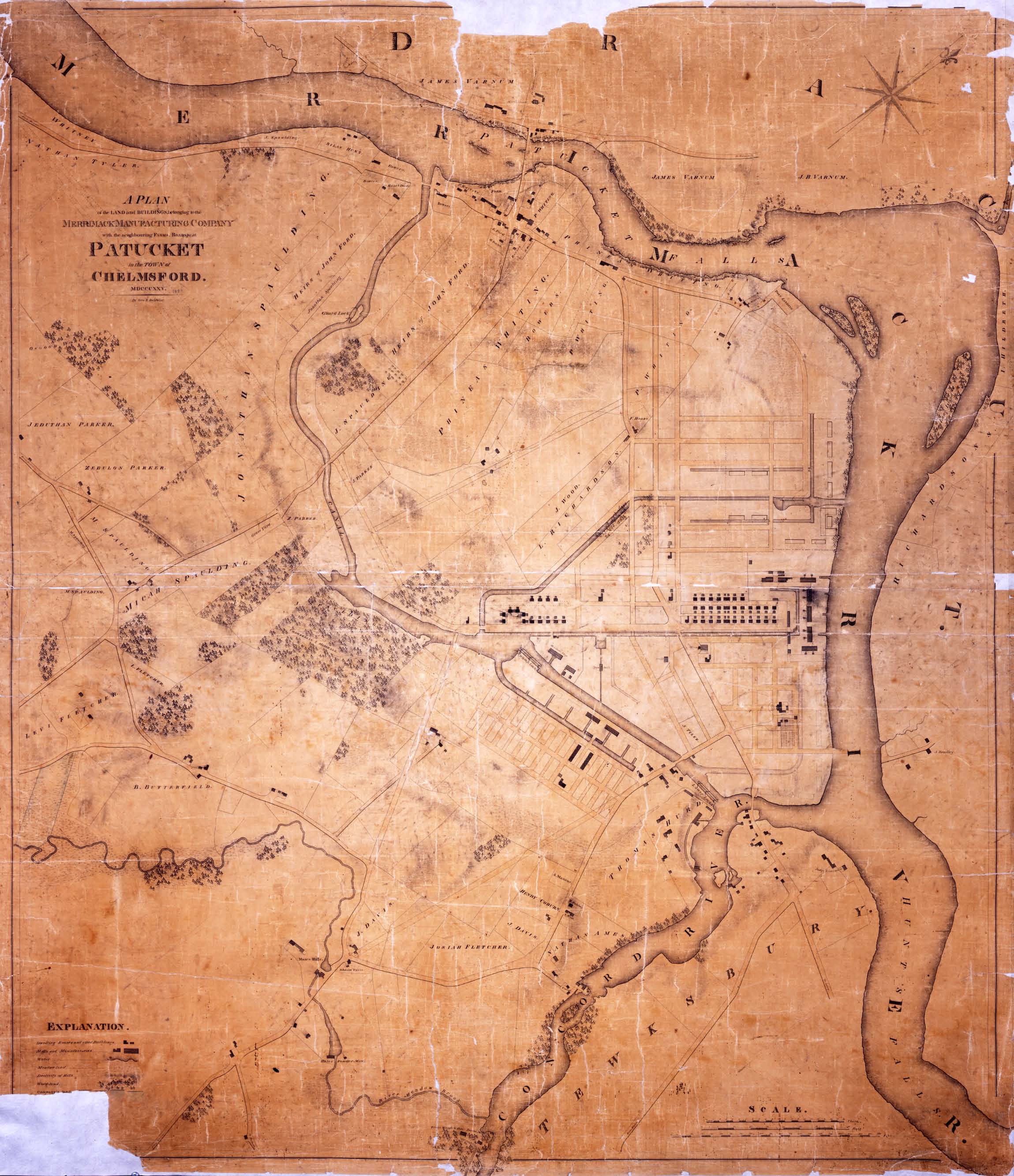 1825 map of Patucket in the Town of Chelmsford. Note that the map's orientation is not true North 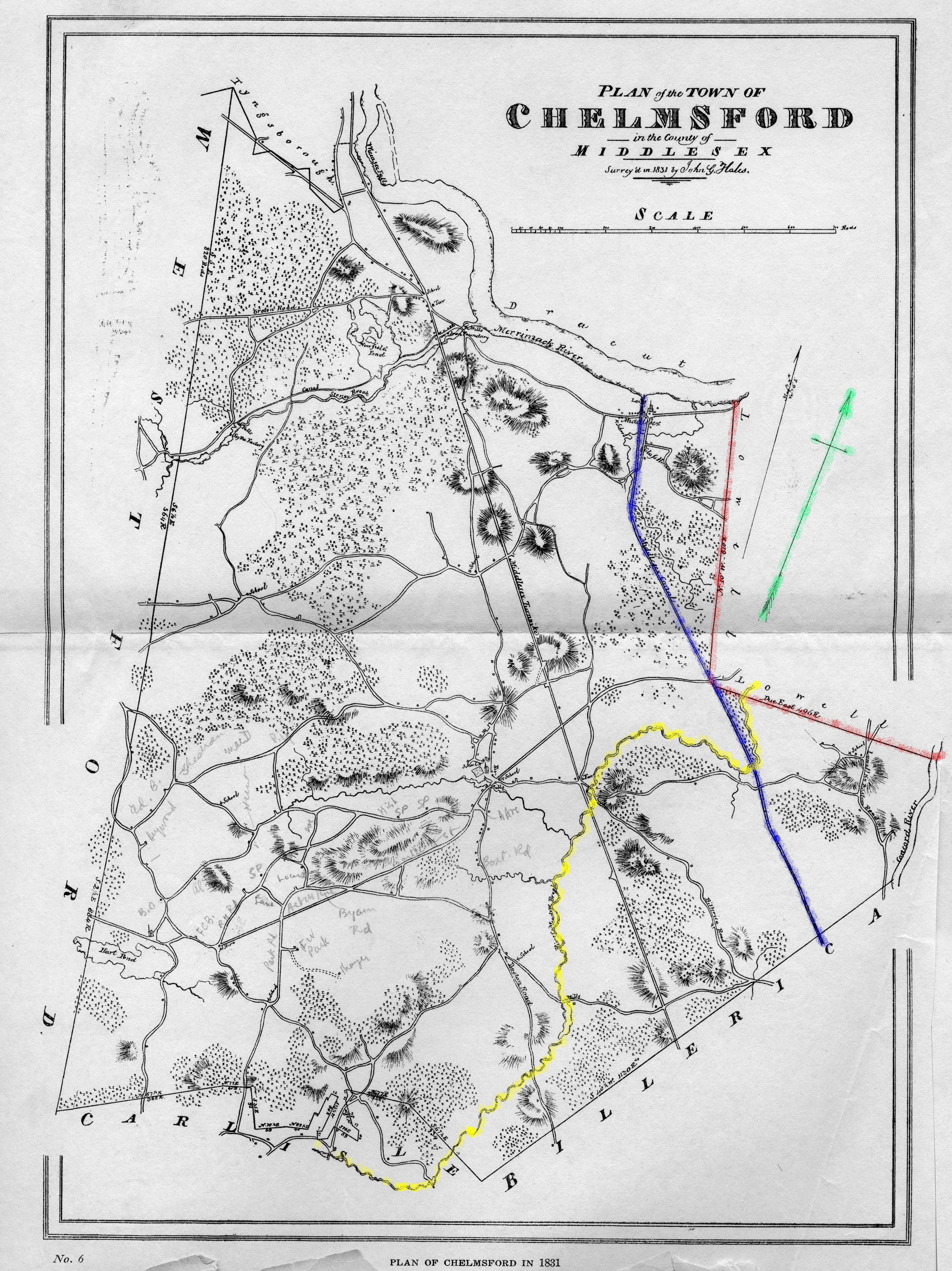 Plan of Chelmsford in 1831. Middlesex Canal is blue, River Meadow Brook is yellow. the boundary with Lowell is red, and the line for true North is green 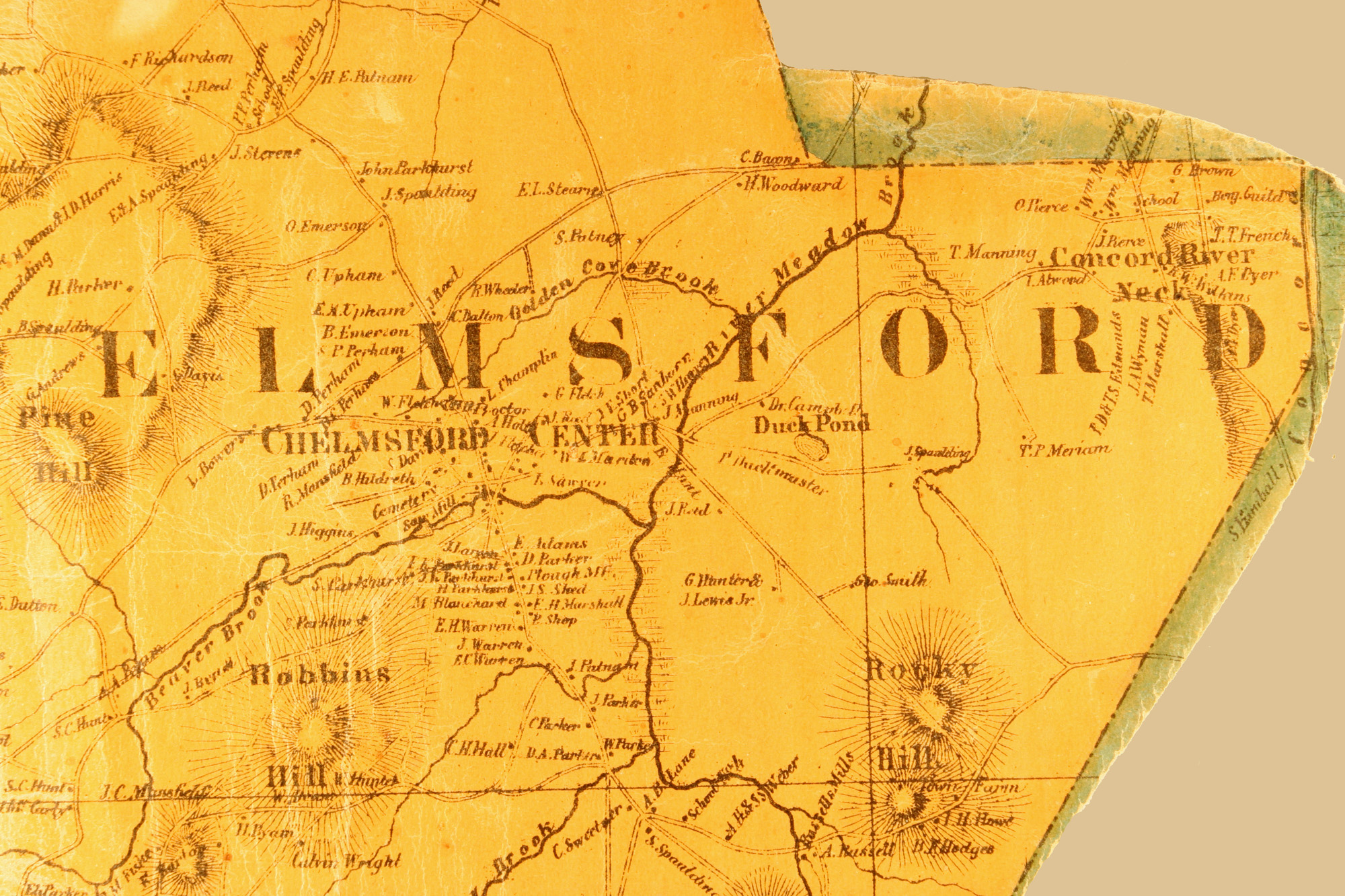 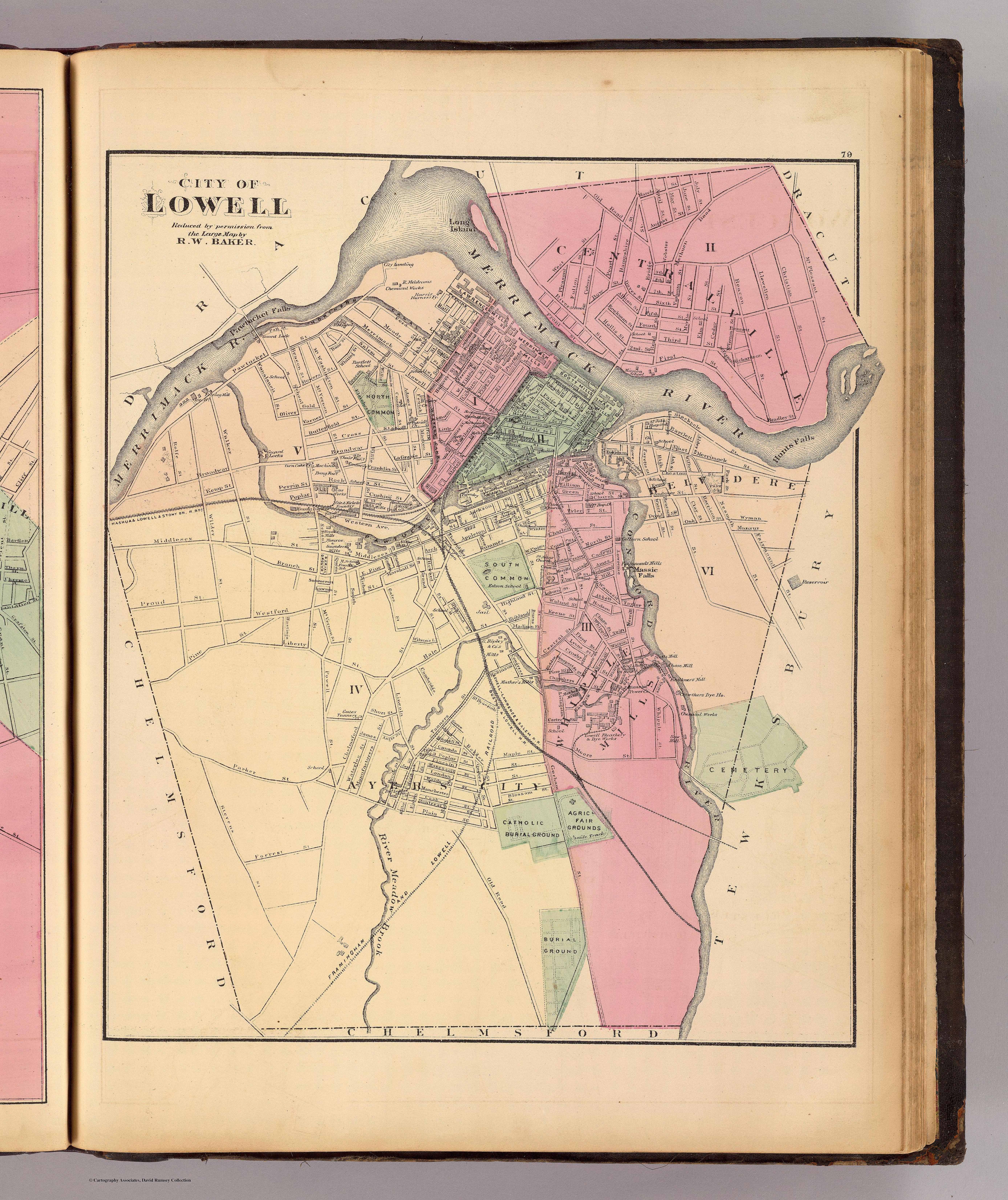 An 1871 map of Lowell. The City Farm (Poor Farm; Almshouse) buildings are on the bottom left, near the Chelmsford border,  where the Framingham and Lowell Railroad crosses River Meadow Brook. 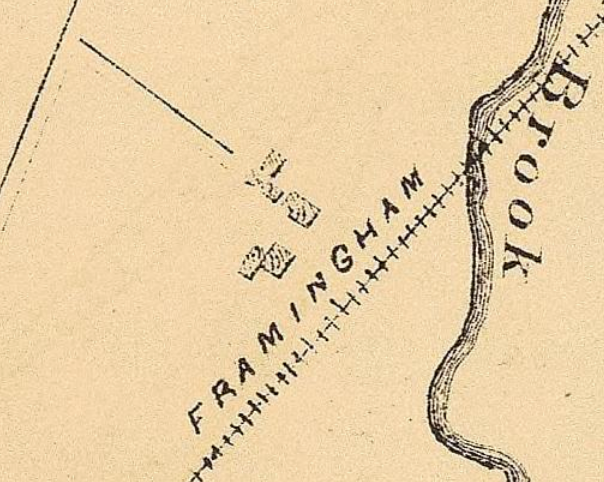 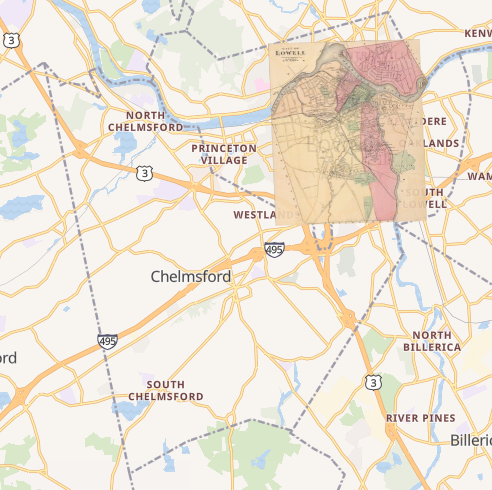 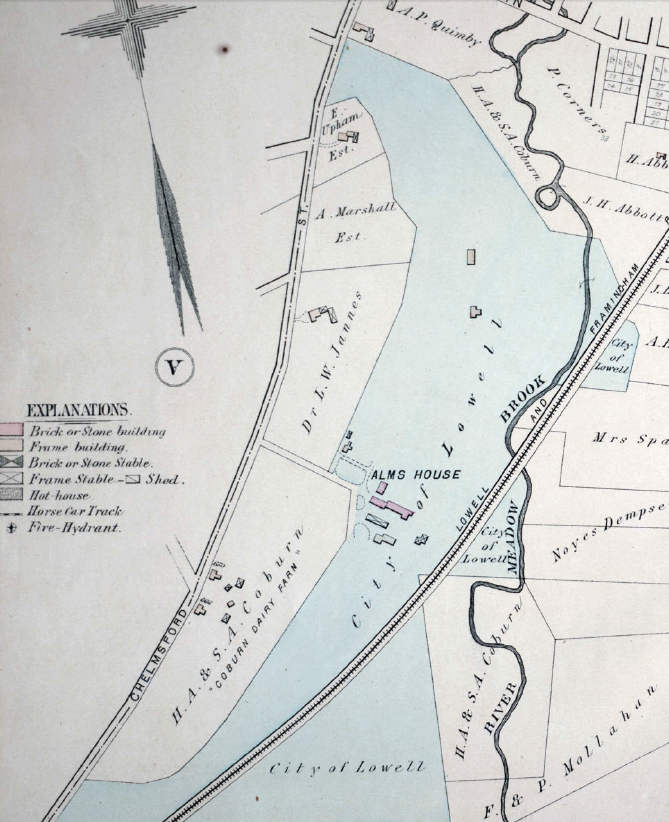 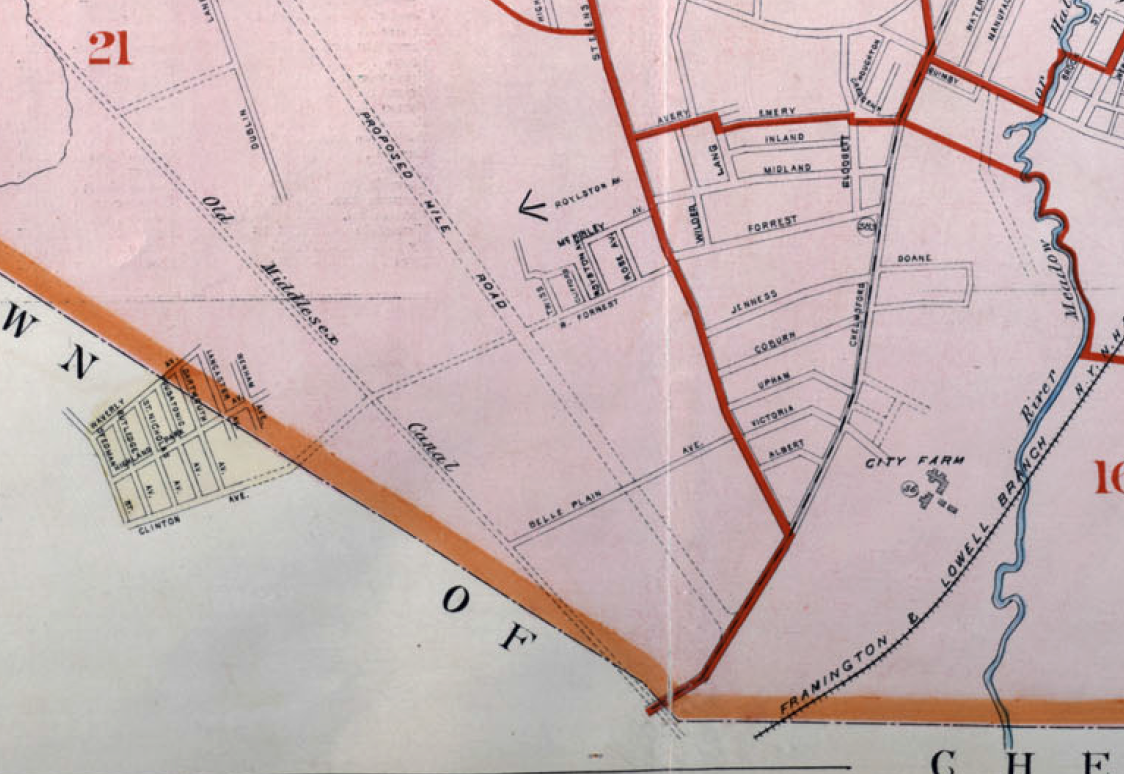 Side by side images

1896 map detail on the left, current Google Maps satellite photo on the right