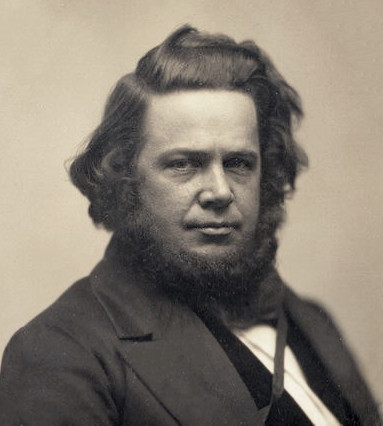 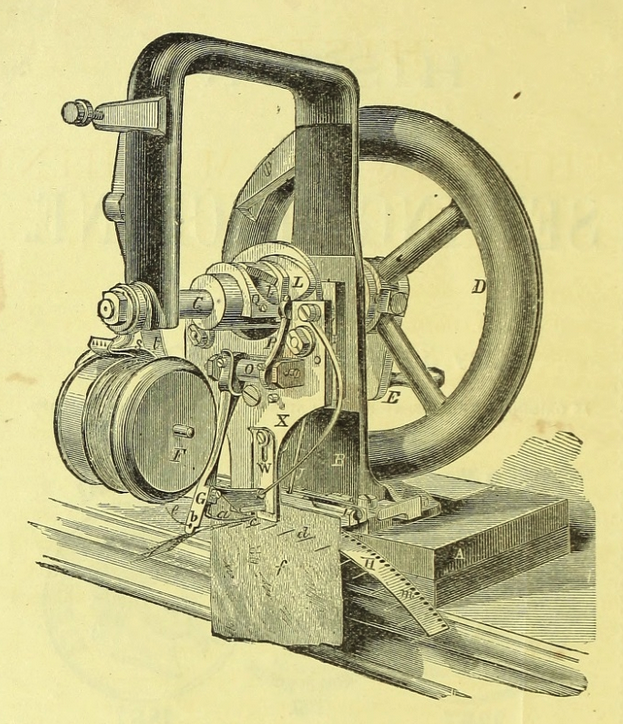 Many biographical works and articles about Elias Howe, Jr., (1819 - 1867) inventor of the lockstitch sewing machine, mention his brief time working in Lowell. Some of these accounts incorrectly place Howe in a textile factory but, in fact, he worked at the Lowell Machine Shop, where the machinery for the mills, in addition to other technologies, was designed and produced.

A financial crisis known as the Panic of 1837 caused Howe to lose his job in Lowell. The story goes that he went to work in Cambridge for a few months, then went to work in Boston where he heard about the idea of a sewing machine. He later moved back to Cambridge, Massachusetts where, after long hours of work and some trial and error, he invented the machine. On September 10, 1846, Howe was awarded the first United States patent for a sewing machine using a lockstitch design. 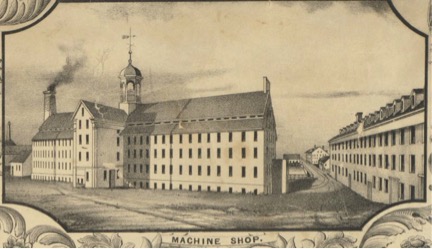 The whole story of the sewing machine is both interesting and involved and won’t be recounted here. The purpose of this retelling is to point out some of the inaccuracies that exist in some popular accounts, and to emphasize the Lowell connections in the story.

Elias Howe was born in 1819 in Spencer, Massachusetts. His father’s farm was said to have a gristmill, a sawmill, and a shingle machine.  His uncle Tyler Howe invented of the Spring Bed and his uncle William Howe, invented of the Truss Bridge. 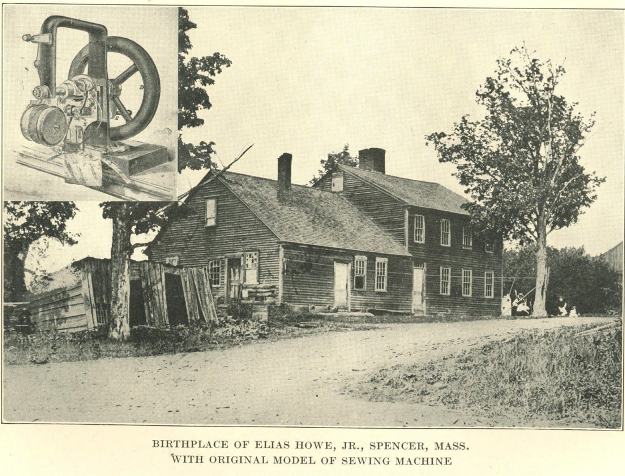 The Howe Family homestead where Elias Howe, Jr., and his uncles, Tyler and William Howe, inventor of the Truss Bridge, were born. A monument commemorating the three inventors marks the site of the homestead.

In History of the Sewing Machine, published in 1867, the year of Howe's death, biographer James Parton (1822 - 1891) wrote:
“One of his young friends returning from Lowell about this time [age 16], gave him such a pleasing description of that famous town that he was on fire to go thither. In 1835, with his parent’s reluctant consent, he went to Lowell, and obtained a learner’s place in a large manufactory of cotton machinery, where he remained until the crash of 1837 closed the mills of Lowell  and sent him adrift, a seeker after work.” [Note: the economic Panic of 1837 had profound negative effects, but did not close the mills of Lowell.] 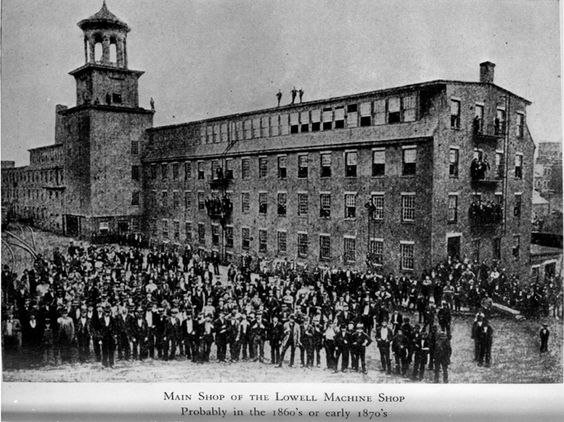 The “large manufactory of cotton machinery” mentioned in the quote was the Lowell Machine Shop. Before, during, and after Howe’s short tenure, this machine shop was the Menlo Park or the Silicon Valley of its time. The Lowell Machine Shop was not just about producing the equipment for the mills, it was also a research and development hub where some of the period’s best engineers worked.

As examples of the shop's importance, we can look at who was at the machine shop during Howe’s brief tenure there. George Washington Whistler (1800 – 1849), the father of the painter James McNeil Whistler, directed the building of the machine shop's first locomotive in the shop in 1835. To accomplish this, he took apart an imported English locomotive to learn how it was constructed. From the components, Whistler developed plans that the shop used to manufacture its own locomotives. Within three years, the machine shop had manufactured 32 locomotives. 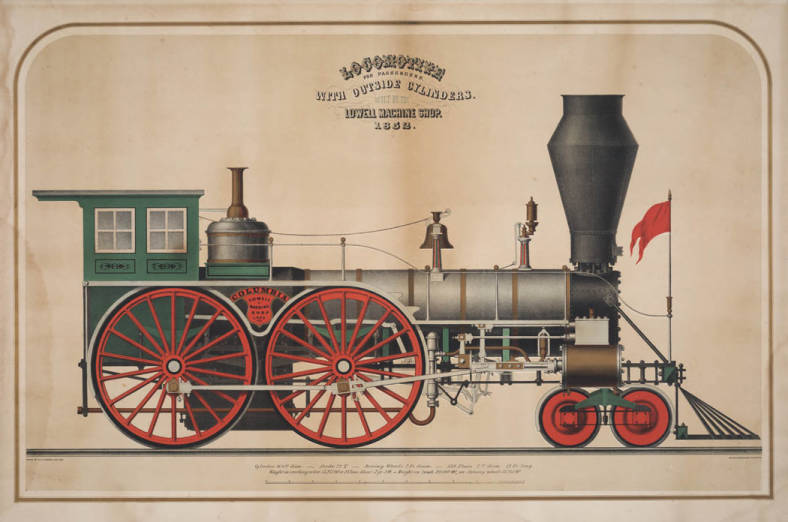 James Bicheno Francis (1815 –1892), who began working in the shop around 1834 and took charge of the machine shop in 1837 after Whistler resigned, was working there at the same time as Howe. Francis later re-engineered the city's canal system and oversaw the mills’ transition to turbines for power, as the Lowell Machine Shop became a leader in the manufacture of the eponymous Francis Turbine, the most common water turbine in use today. The Great Gate at the entrance of the Pawtucket Canal (also known as Francis' Folly and Francis Gate) was designed by Francis in 1848 and was completed in 1850. The gate protected Lowell from devastating floods in 1852, 1936, 2006, and 2007.

The fact that the main work of the Lowell Machine Shop was textile machinary was also important to the invention story. When Elias found his solution to the problem of making a sewing machine, it used a lockstitch, which is a weaving stitch rather that a chain stitch, which is a knitting stitch. So, his familiarity with the workings of textile machinery contributed to his thinking.

Howe's next moves are reported inconsistently in various naratives. The following is the best that I could assemble based on available innformation. First he worked in Cambridge for a few months. Then, he got a position at the shop of Ari Davis on Cornhill in Boston. This is where what I will call “the conversation” took place in 1839. He later moved back to Cambridge, and worked in the attic of an old schoolmate, George Fisher, who provided other support as well. Here, he invented the machine in 1845. On September 10, 1846, he was awarded the first United States patent for a sewing machine using a lockstitch design

Ari Davis, the owner of the shop on Cornhill, had strong Lowell connections. He lived for a while in Lowell, worked at the The Lowell Machine shop, married a woman from Lowell, had business connections to Lowell, had a brother who was a long time resident of Lowell, died in Lowell, and is buried at the Lowell Cemetery.

I have not found the specific connection between Ari Davis and Elias Howe, but I doubt that he ended up working at Davis's Boston shop coincidently. Did Ari work with Elias at the machine shop? Was it a family or social connection? 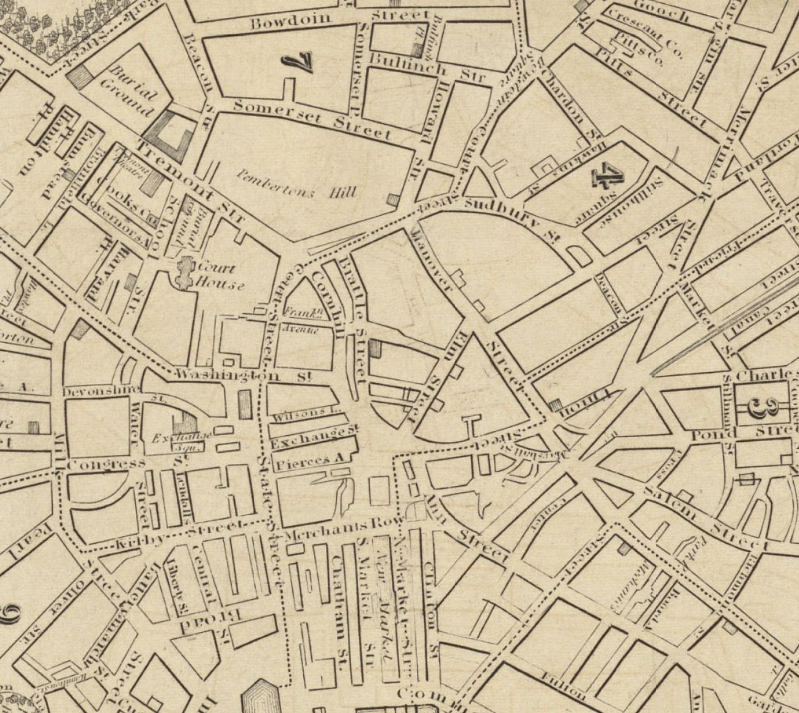 According to Zina Stone in The Introduction of the Telegraph, the Telephone, and the Daguerreotype into Lowell (1892):

“Mr. Davis, it seems, was a good deal attached to Lowell, perhaps for the reason that at one time he had been employed as a mechanic at the Lowell Machine Shop, and likewise that the wives of himself and his brother Asahel were sisters of Mr. Joseph M. Dodge, at the time a well-known contractor and carpenter; these circumstances, or others unknown to us, certainly brought him often to Lowell as a lecturer.” [Note: The wives of Ari (Sophronia) and Asahel Davis (Eliza) were sisters of Joseph M. Dodge's wife, Lucy Johnson Dodge.] 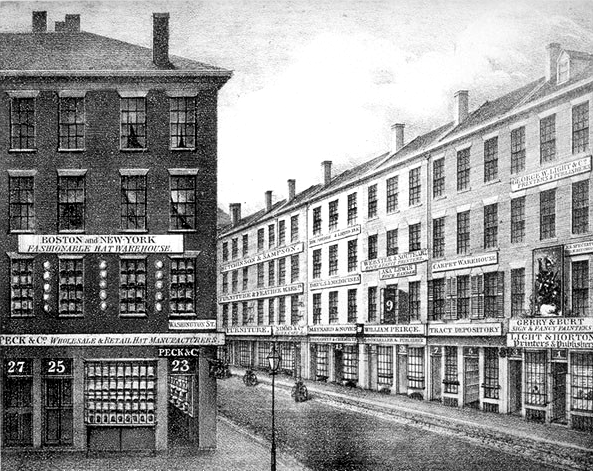 According to James Parton in History of the Sewing Machine, the conversation that inspired Elias Howe to pursue his invention went as follows:

In Cornhill, Boston, [in the 1830s], there was a shop for the manufacture and repair of nautical instruments and philosophical apparatus, kept by Ari Davis. Mr. Davis was a very ingenious mechanic, who had invented a successful dovetailing machine, much spoken of at the time, when inventions were not as numerous as they are now. Being thus a noted man in his calling, he gave way to the foible of affecting an oddity of dress and deportment. It pleased him to say extravagant and nonsensical things, and to go about singing, and to attract attention by unusual garments. Nevertheless, being a really skilful mechanic, he was frequently consulted by the inventors and improvers of machinery, to whom he sometimes gave a valuable suggestion.

In the year 1839, two men in Boston—one a mechanic, and the other a capitalist—were striving to produce a knitting-machine, which proved to be a task beyond their strength. When the inventor was at his wit's end, his capitalist brought the machine to the shop of Ari Davis, to see if that eccentric genius could suggest the solution of the difficulty, and make the machine work. The shop, resolving itself into a committee of the whole, gathered about the knitting-machine and its proprietor, and were listening to an explanation of its principle, when Davis, in his wild, extravagant way, broke in with these words: “What are you bothering yourselves with a knitting-machine for? Why don't you make a sewing-machine?”

“Well,” said the other, “you do it, Davis, and I'll insure you an independent fortune.”

There, the conversation dropped, and it was never resumed. The boastful remark of the master of the shop was considered merely one of his sallies of affected extravagance, as it really was; and the response of the capitalist to it was uttered without a thought of producing an effect. Nor did it produce any effect upon the person to whom it was addressed. Davis never attempted to construct a sewing machine.

Among the workmen who stood by and listened to this conversation was a young man from the country, a new hand, named Elias Howe, then twenty years old. The person whom we have named the capitalist, a well-dressed and fine-looking man, somewhat consequential in his manners, was an imposing figure in the eyes of this youth, new to city ways; and he was much impressed with the emphatic assurance that a fortune was in store for the man who should invent a sewing-machine. He was the more struck with it, because he had already amused himself with inventing some slight improvements, and recently he had caught from Davis the habit of meditating new devices. The spirit of invention, as all mechanics know, is exceedingly contagious. One man in a shop who invents something that proves successful, will give the mania to half his companions, and the very apprentices will be tinkering over a device after their day's work is done. There were other reasons, also, why a conversation so trifling and accidental should have strongly impressed itself upon the mind of this particular youth. Before that day, the idea of sewing by the aid of a machine had never occurred to him. 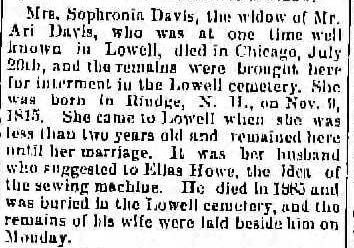 “It was her husband who suggested to Elias Howe, the idea of the sewing machine.”
The obituary of Sophronia Davis, Lowell Sun, July 25, 1894

How a sewing machine works - YouTube clip (not an ad)

Charles Cowley, in the History of Lowell (1868), speculates about another Lowell connecton to Howe and the sewing machine - John A. Bradshaw [pdf download]. I have not found any other references to a connection between Howe and this inventor.

“It was in 1835 that Elias Howe, Junior-then a boy of sixteen-came to Lowell. He remained here two years, employed in building cotton machinery. While here, he probably became acquainted with the experiments which John A. Bradshaw was then making with the sewing machine. Nine years later, he invented the famous Lock-Stitch Sewing Machine, for which he obtained a patent in 1846. Little, however, did he appreciate the value of his invention; for he offered to sell his patent for the sum of five hundred dollarsa patent from which he afterward realized half a million dollars in a single year! He died October 3rd, 1867, at Brooklyn.”

The introduction of the telegraph, the telephone, and the daguerreotype into Lowell / by Z.E. Stone, read November 18, 1892 - https://archive.org/details/contributionsofooldr/page/n7/mode/2up

The Boston and Lowell Railroad - https://en.wikipedia.org/wiki/Boston_and_Lowell_Railroad