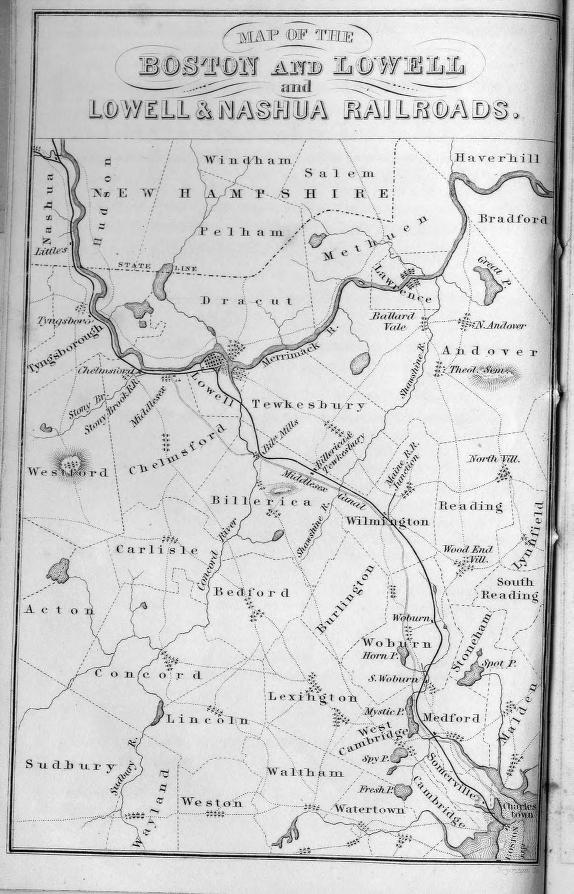 Map from A Descriptive Guide-Book to the Railway Route Between Boston and Burlington, via Lowell and Concord, Boston: Pathfinder Railway Guide Office, 1850. 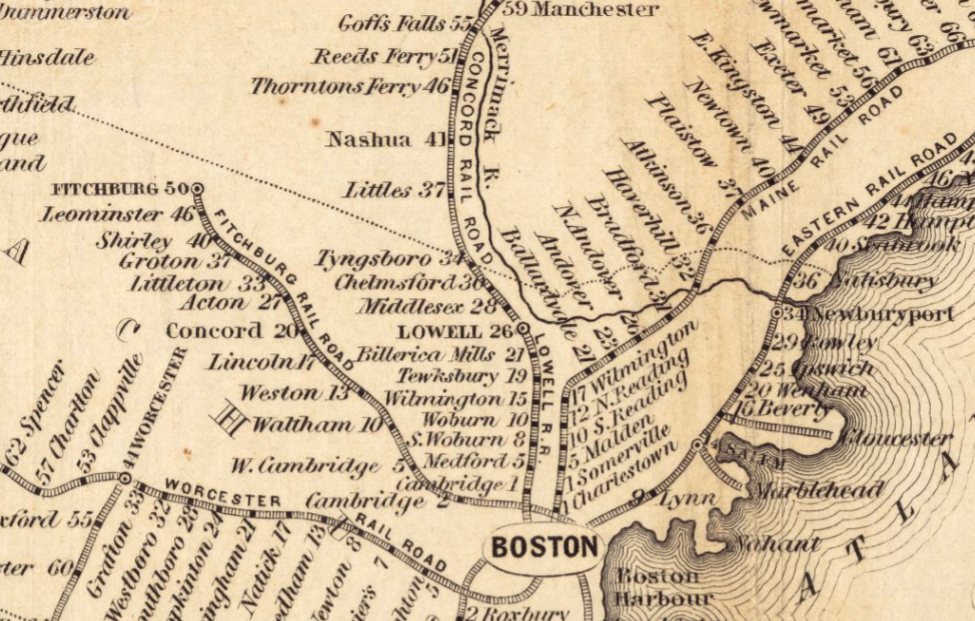 Detail from Diagram of rail roads diverging from Boston: showing the depots and distances 1846

Text below is from A Descriptive Guide-Book to the Railway Route Between Boston and Burlington, via Lowell and Concord, Boston: Pathfinder Railway Guide Office, 1850.

THE BOSTON AND LOWELL

The Boston and Lowell Railroad, 26 miles in length, was opened for passengers in June, 1835. It was one of the earliest, as it has been one of the most successful, enterprises of the kind in this country. The road is thoroughly built, with a double track, and in its construction and management special regard has ever been had to the safety of its passengers. There are but few crossings at grade, and very few accidents have ever happened upon it. The road is well equipped for its extensive business. 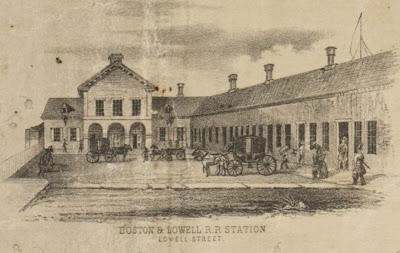 East Cambridge, a thriving place, containing 6 churches, a courthouse and jail, and other public buildings. Many branches of industry are carried on here, but the place is noted especially for its manufactures of glass. Leaving this point, the road very soon crosses an arm of Charles River, then the Fitchburg Railroad, and immediately after it passes, at 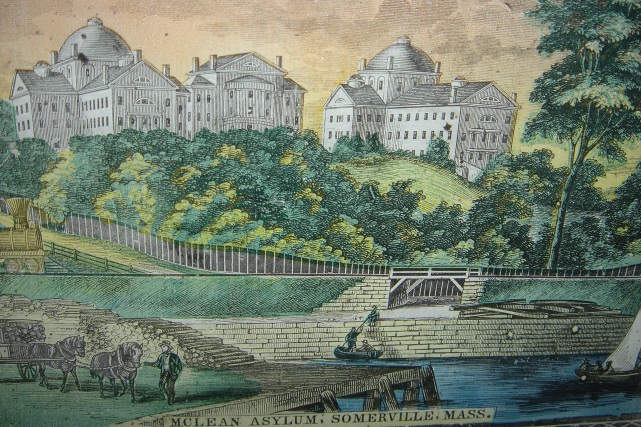 an elevated position on the right, the McLean Asylum for the Insane. The traveller now sees on his left the neat cottages of Somerville, and the church on Spring Hill. On his right, in the distance, are the ruins of the Ursuline Convent. In the 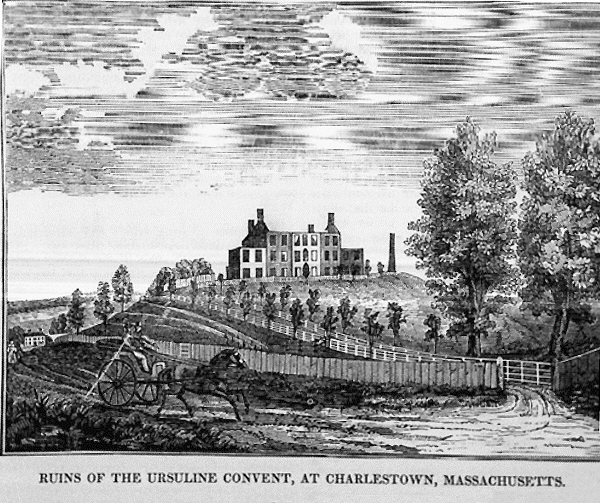 Ruins of the Ursuline Convent

neighborhood of the ruins are situated Prospect and Winter Hills, in Somerville, from which may be had beautiful views of the city and harbor of Boston. Malden and North Malden may now be seen in the distance, on the right, and soon after, Medford. At length the road crosses Middlesex Canal and Mystic River, just beyond which is ⇒ ⇒ ⇒

Medford, 5 miles from Boston. The village is at a little distance from the depot, and is more accessible from Boston by means of a branch from the Maine Railroad. West Cambridge may be seen from the station, on the west, at only a short distance. Medford contains many fertile and highly cultivated farms; but the town is particularly distinguished for ship-building. In five years preceding April 1, 1837, sixty vessels were built here, whose tonnage amounted to 24,000 tons.

Leaving Medford, the road approaches the margin of Mystic Pond, of which the passenger has but a glimpse; it then passes the little settlement at Baconville, crosses the stream, and soon the traveller finds himself at ⇒ ⇒ ⇒

South Woburn, 8 miles from Boston. This thriving little village owes its prosperity to the railroad, and in the summer months it is much resorted to, for a temporary residence, by persons from the city. Various manufactures are carried on here, the stream which passes the place affording sufficient water power for this purpose. A branch railroad, 2 miles in length, extends from South Woburn to Woburn Centre a large, neat, flourishing village. The surface of the town is uneven, and very much diversified with hills, dales, and woods, being thereby rendered exceedingly variegated and pleasant.

Woburn, 10 miles from Boston, is the next stopping-place. This station is 1 1/4 miles from Woburn Centre. Passengers for East Woburn and other places in the vicinity stop here. Immediately above the depot occurs the most extensive excavation on this road. A quick run of 5 miles will now bring us to ⇒ ⇒ ⇒

Wilmington, 15 miles from Boston, and 11 from Lowell. This is an agricultural town, the soil, however, being adapted only to some particular crops. Near the depot is a branch, 2 miles in length connecting with the Maine Railroad, but at present little used. Leaving Wilmington, the road passes near the Middlesex Canal, 4 miles, to

Billerica and Tewkesbury [sic], (Richardson’s,) 7 miles from Lowell. The station here accommodates passengers for Tewkesbury and Billerica, — the latter a town of considerable importance, having a pleasant village at its centre, 2 miles distant. The next station is at ⇒ ⇒ ⇒

Billerica Mills, 4 miles from Lowell. The prosperity of the little settlement here has been checked by the repeated burning of the mills, situated on Concord River. During the next stage the railroad crosses Concord River, and soon after approaches the deep rock cutting, the most formidable obstacle in the construction of this railroad. Passing that, the traveller immediately finds himself at ⇒ ⇒ ⇒

Lowell. This place is so well known as hardly to need any description here. In 1821, it was inhabited by only a few families, and was in no way distinguished; in 1826 it was incorporated as a town, and in 1836 it became a city. It now contains a population of 30,000; 15 or 20 churches; 3 banks; several well-kept hotels; and many important public buildings. Its water power is improved by 12 manufacturing corporations, with a capital of more than 12,000,000 dollars, and employing 12,000 hands. Nor is Lowell a manufacturing city merely. With its growth and increase of business, great care has been taken to promote the moral and intellectual character of its population. This city stands among the first in the cities and towns of Massachusetts in the amount appropriated for public instruction, and its schools are universally acknowledged to be of a high order. A city library was established in 1844, which now contains several thousand volumes, and to which all may have access. There are various other institutions, which, by means of libraries, lectures, &c., are adapted to elevate the character of the population. An elegant and spacious mansion has been purchased by the corporations and converted into a hospital to which all persons employed by the corporations may have access when sick or disabled. A public cemetery has been laid out, on the east bank of Concord River, about a mile above its junction with the Merrimac. This place, from its variety of surface, its rich growth of wood, the graceful bend of the river near by, and the quiet which reigns around, is admirably adapted to the solemn purpose to which it has been consecrated. The passenger for the north sees little of Lowell, the depot being at its outskirts. Lowell passengers, however are taken into the heart of the city by a branch railroad.

At Lowell commences the Nashua and Lowell Railroad, 15 miles in length, extending to Nashua, N.H. It was opened in Oct, 1838. Though a short link in the line of communication between Boston and the north, this road is one of the most productive in the country; 200,000 passengers and 150,000 tons freight are annually carried over it - more than four times the amount of the estimated business of the road at the time of its construction!

Leaving the Lowell station, the passenger quickly passes along and crosses the old canal, which supplies part of the water power of the city, and then a run of two minutes brings him to the Merrimac River, near the margin of which the road passes till he reaches ⇒ ⇒ ⇒

Middlesex, the first stopping-place, 2 miles from Lowell. The cars always stop here to take or leave passengers; but the station is comparatively unimportant, and is frequently passed without stopping.

A few rods from the depot is Middlesex Village, in Chelmsford, distinctly seen from the cars. Here is the head of the old Middlesex Canal, the business upon which was the foundation of this settlement. Since the use of the canal has been discontinued, the village has declined. Chelmsford is noted for its granite and limestone. Two miles further is

North Chelmsford. Here is a thriving little settlement, at the mouth of Stony Brook; and from this place extends the Stony Brook Railroad, 13 1/2 miles in length, to Groton, where it connects with the Fitchburg Railroad. The next station is at ⇒ ⇒ ⇒

Tyngsborough, 7 miles from Lowell. The track here, for some 80 rods, is laid upon a wall at the very margin of the river. 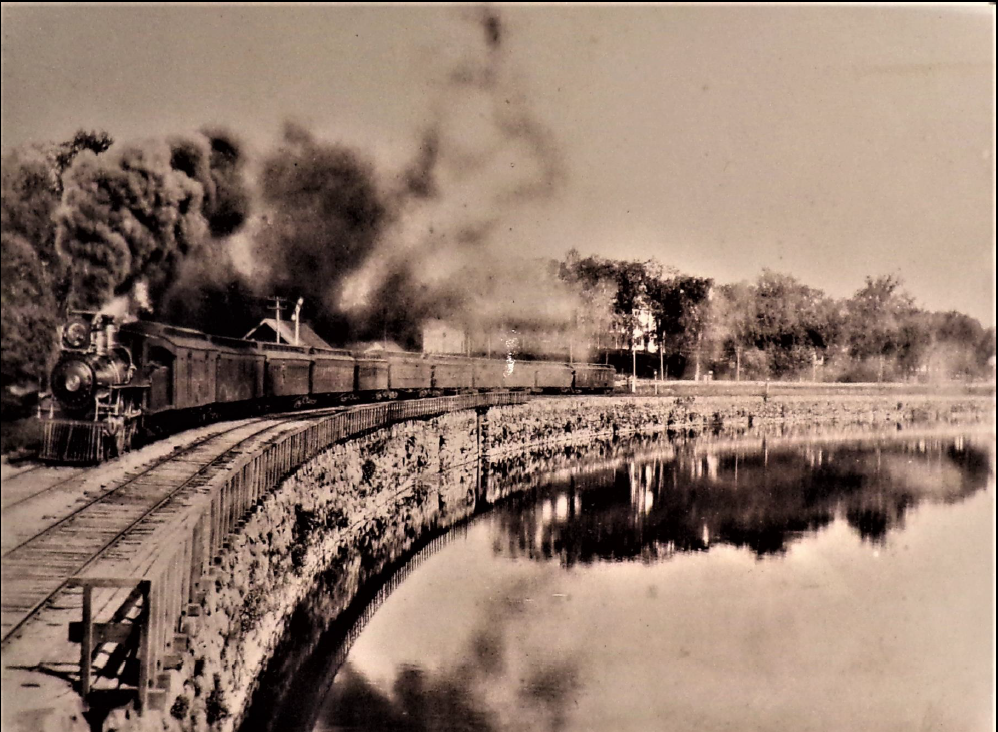 A short distance above the depot is a little village, occupying a pleasant site, and containing a church and several neat buildings. A few years since, before the construction of the railroad, this portion of the Merrimac was enlivened by the frequent passage of a steamboat which plied between Lowell and Nashua for the transportation of passengers, and by the numerous boats which conveyed merchandise between Boston and Concord. Now, rafts of lumber are occasionally seen upon its surface, but the boats have disappeared. The next station is at ⇒ ⇒ ⇒

Little's, 4 miles below Nashua. This stopping-place accommodates passengers for the lower part of Nashua and Hudson. The next stopping-place, at the junction of the Concord Railroad, is at ⇒ ⇒ ⇒ 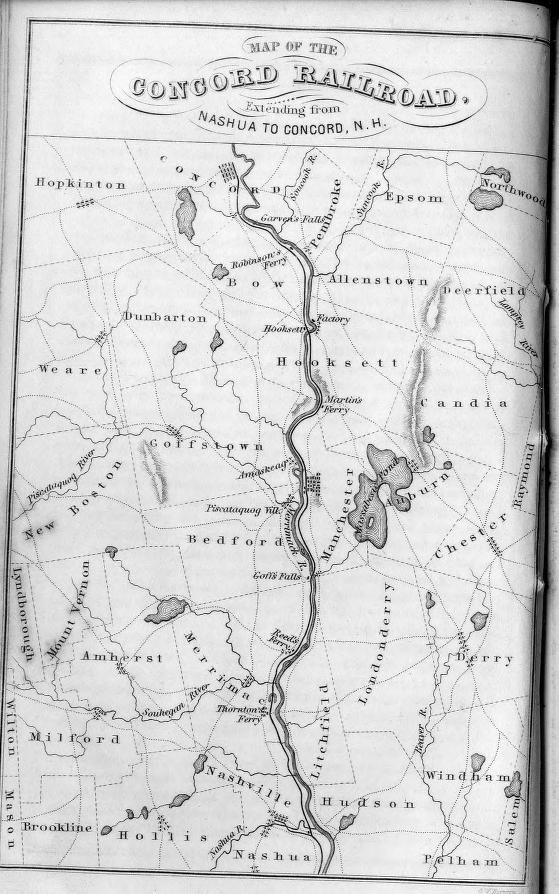 Map from A Descriptive Guide-Book to the Railway Route Between Boston and Burlington, via Lowell and Concord, Boston: Pathfinder Railway Guide Office, 1850.

Nashua, 40 miles from Boston. This station is one mile below Nashua Village, the terminus of the Nashua Railroad. Here is also the point of junction of the Nashua and Worcester Railroad.

Nashua Village is an important point upon this line of railroad, lying on both sides of Nashua River, partly in Nashua and partly in Nashville. That portion of the village lying in Nashua contains 4 churches, a beautiful town-house, a bank, the post-office, a large number of handsome dwelling-houses, about 50 stores, and 3 hotels. The Nashua Manufacturing Company was incorporated in 1823. It has 4 large mills, employing 1200 hands. The mills contain 37,000 spindles and 1090 looms, and manufacture 13,000,000 yards of cloth per annum. Connected with the mills is a large machine shop, in which a variety of articles are manufactured, besides such as are required in the mills, and in which about 300 men are employed. Here is also an extensive iron foundry, employing 30 men, in which more than 4,000 pounds of castings are manufactured per day. The portion of the village lying in Nashville contains a number of churches, the mills of the Jackson Manufacturing Company, the depot of the Nashua and Lowell Railroad, a large number of handsome dwelling-houses, and about 30 stores. Here the Nashua and Lowell Railroad connects with the Wilton, the latter extending 9 miles, to a point between Amherst and Milford. Here is also a beautiful cemetery, lying in a grove in the rear of the Unitarian church, containing 200 lots, which are owned by individuals oi all the religious societies.