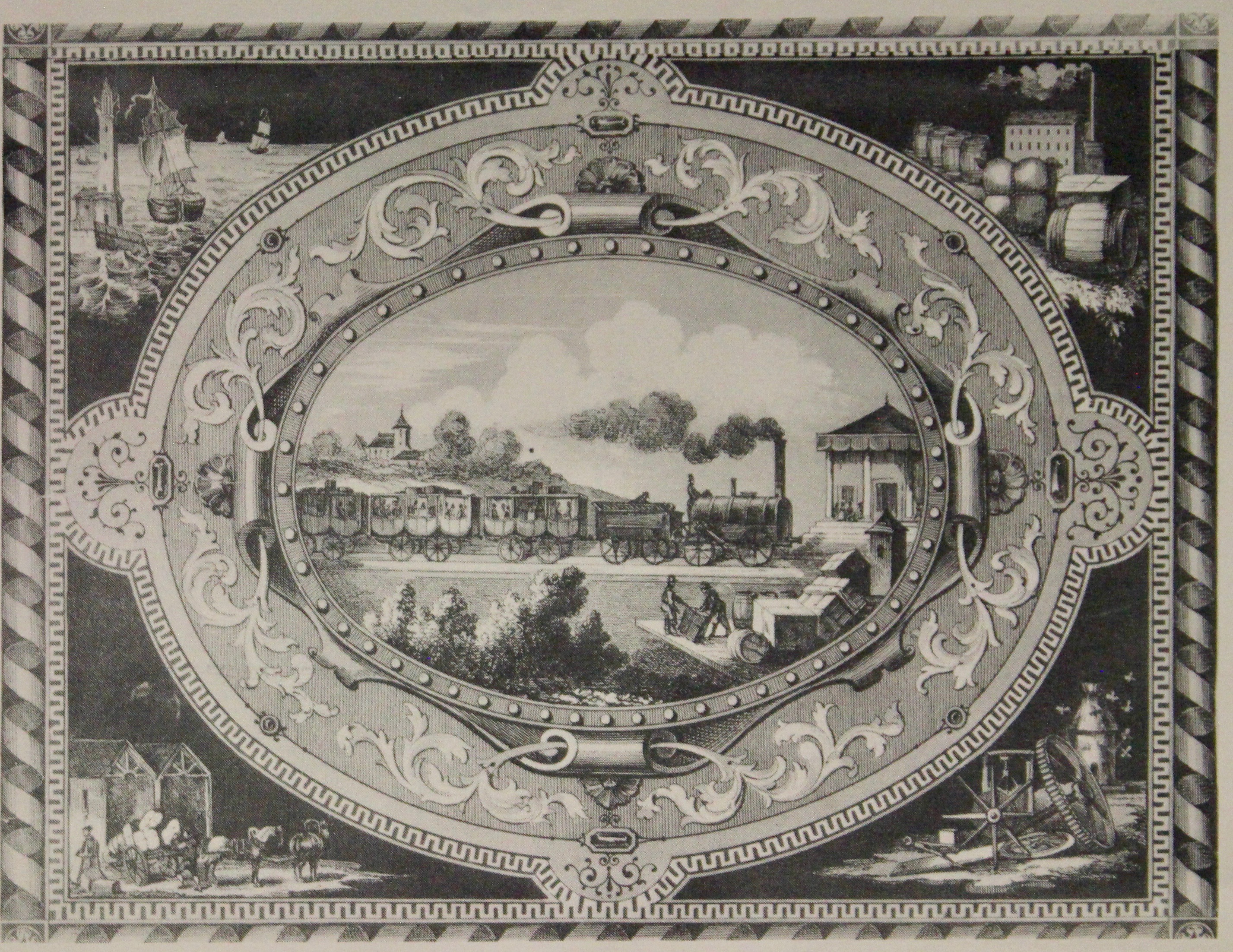 The original main line of the Boston & Lowell Railroad was only twenty-six miles in length; and for many years it remained "little among the thousands" of great railway lines. Now that it has suddenly reached out and, by purchase, lease and business contract, secured the management or traffic of many connecting and tributary roads, so that it has become the largest railroad system in New England, it is interesting to recall the fact that, as it was the first railroad chartered in New England for passenger transportation, so it was the first to be completed and operated its entire length, and it was the third or fourth in the United States.

In 1821, what is now the city of Lowell was a straggling village of twelve houses; some time previous a canal had been dug around Pawtucket Falls, on the Merrimack River, for purposes of navigation. In 1822, an organization was effected under the name of " The Locks and Canal Co." on the Merrimack River, to utilize the water power for manufacturing purposes, and the first wheel was set in motion Sept. 1, 1823. The facilities for the transportation of raw material to, and manufactured goods from, the place, were the river from Newburyport via Haverhill, the Middlesex Canal from Boston, and the highways; the latter being sandy in summer, muddy in spring and early winter, and often blockaded with snow in mid-winter. In 1820, Messrs. William Appleton, Patrick T. Jackson and Kirk Boott, of Boston, with other far-seeing men of the owners and managers of water power and mills located at Lowell, were convinced that there must be greater transportation facilities for the proper development of their investments; for already on an average as many as twenty-four tons of freight passed daily between the manufacturing village and the then young city of Boston, and "six stage-coaches, drawn by four and six horses each, "conveyed" from 100 to 120 passengers daily from one town to the other." This is a small amount of freight and number of passengers to us, but for that day indicates that great business activity had begun in eastern Massachusetts. It was evident that something must be done speedily, and certain enterprises in England and other parts of this country attracted their attention and directed their efforts.

In 1827, a road three miles in length, with rails of wood covered with iron, was opened from the Quincy granite quarries to the Neponset River, and successfully used with horse-propelling power. This same year another similar road, nine miles in length, was opened among the coal mines of the Lehigh region in Pennsylvania; and, in 1821), the Delaware & Hudson Canal Co. constructed a third railroad. All of these were operated either by gravity, animals, or stationary steam engines, and were for freight transportation only. The latter company, hearing of the success of Stephenson in moving loads of coal in England on a railroad, sent an agent there, who purchased a locomotive steam engine named the " Stourbridge Lion," which was tested on their road at Honesdale, Penn., August 8, 1829, "which was, without a shadow of doubt, the day the first locomotive turned a driving wheel upon a road on the American continent."

The Massachusetts Legislature of 1829 had ordered a survey, at State expense, to ascertain the practicality of a railroad between Boston and Lowell. It was made by Mr. James Haywood, and his report transmitted to the Legislature by Gov. Levi Lincoln on Jan. 1, 1830. The previous October, Stephenson had made his successful experiment with a locomotive steam engine on the Manchester & Liverpool Railroad. All these movements had been closely watched by those interested in the Lowell "Locks and Canal Co.," and on Jan. 18, 1830, Patrick T. Jackson, Esq., requested Kirk Boott, Esq., agent, to call a meeting of the directors, by whom he hoped a meeting of the "proprietors" would be called, and he states that his "object is to draw the attention of the proprietors of that stock to the project for building a railroad from this place (Boston) to Lowell." The directors' meeting was the 22d and the proprietors the 27th of January, at the house of Mr. Jackson, No. 22 Winter Street, Boston, when the first step was taken for the organization of a company to build the Boston & Lowell Railroad. The project was strenuously opposed by the owners of the Middlesex Canal, but the Legislature of that year granted a charter, giving the company the exclusive right to railroad transportation between Boston and Lowell for thirty years, which rights the courts afterwards sustained them in asserting. The road was so well located and built that there is no grade over ten feet to the mile, except at the overhead crossing of the Fitchburg Railroad in Somerville, and all the curves are wide and easy.

A copy of "The Merchants' and Traders' Guide and Strangers' Memorandum Book for the year of our Lord 1836," says: "This road was opened for public accommodation on the 24th of June, 1835, [the Providence road was opened June 11th, and the Worcester, July 4th, of the same year,] and its cost thus far exceeds $1,000,000. The road is built with a single track, and is constructed of the iron edge-rail, supported by cast-iron chairs on stone blocks and stone sleepers, resting on stone foundation walls. A second track is commenced and laid about five miles." This second track was not so expensively laid with stone foundation walls, as it was found that the frost would not heave the sleepers so much as was feared. All of the stone blocks and stone sleepers have now been removed, being replaced with wood; but many of them may yet be seen lying by the railroad side between Boston and Lowell. The rails were not of the now universal "T" pattern, but what were called "fish bellies," because they were wider perpendicularly in the middle than the ends -where they rested on the chairs; they were of iron and weighed only 35 pounds to the yard and broke easily. The first locomotive used on the road was built in England and named the "Stephenson," and, among other peculiarities,

had the plates on the side of her fire-box welded instead of riveted. The first passenger car was an open one ; covers were soon provided, above which was a chaise-top for the conductor, who was the lookout, and carried a silver whistle to blow as a signal, which however could hardly be heard when the train was in motion, on account of the force of the wind. The engines had no cabs, and the engineer and fireman were exposed to all the extremes of weather.

"The Merchants' and Traders' Guide," before quoted, also contains the following interesting notice in connection with the above: "Before the starting of the cars, stages leave Nos. 9 and 11 Elm Street, and City Tavern, Brattle Street, and call at almost any part of the city for passengers, and take them to the depot free of charge. Arrangements have not yet been made, though they are in progress, for the conveyance of merchandise, but there is a private car attached to the train for the purpose of conveying small quantities of merchandise." Probably this was the forerunner of the modern express companies' cars.

The Boston terminus was then at the foot of Lowell Street, where the freight-house now is. In 1857, the present site of the station on Causeway Street was occupied, and the present costly and commodious depot, 700 feet long, having a frontage of 205 feet, with a train-house having an arch with a clear span of 120 feet without any central support, was occupied in 1874. The spot upon which it stands is made land, and the Blackstone Canal which formerly crossed Boston along the line of the street of that name, intersected Causeway Street near this point, that street being originally what its name implies, a causeway with water on either side. The writer's father has told him he had often seen vessel's jib-booms extending over that street, the water allowing them to be moored by its side. 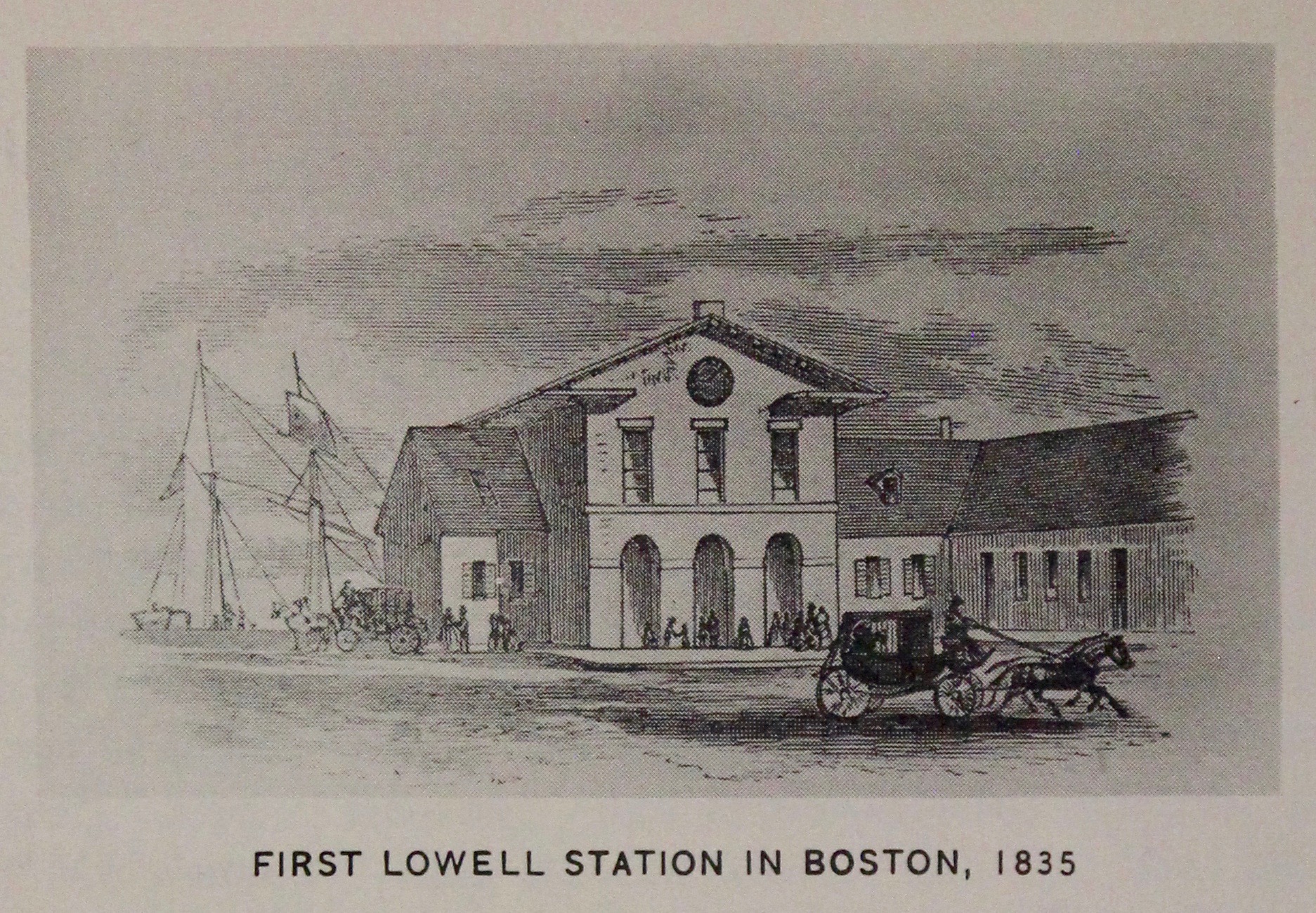 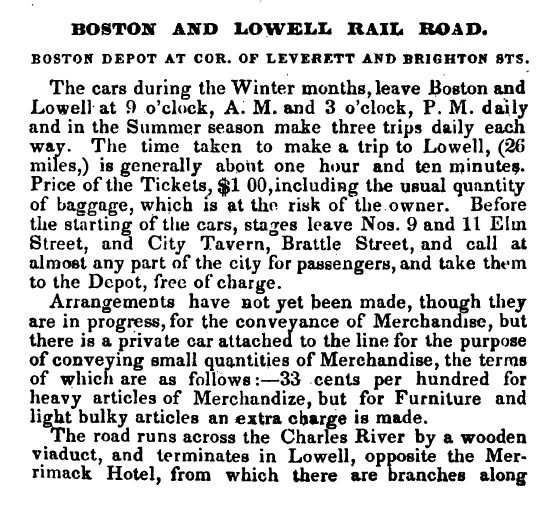 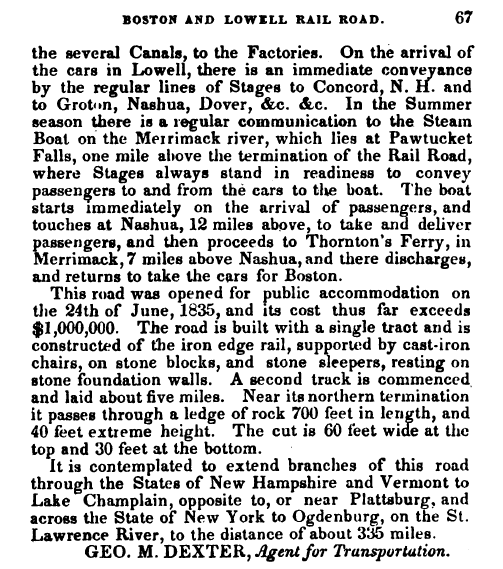 Related pages on this site -

Inventory for the Uriah Boyden Scrapbook

Plan of Lowell village / from a survey by U.A. Boyden in March 1835