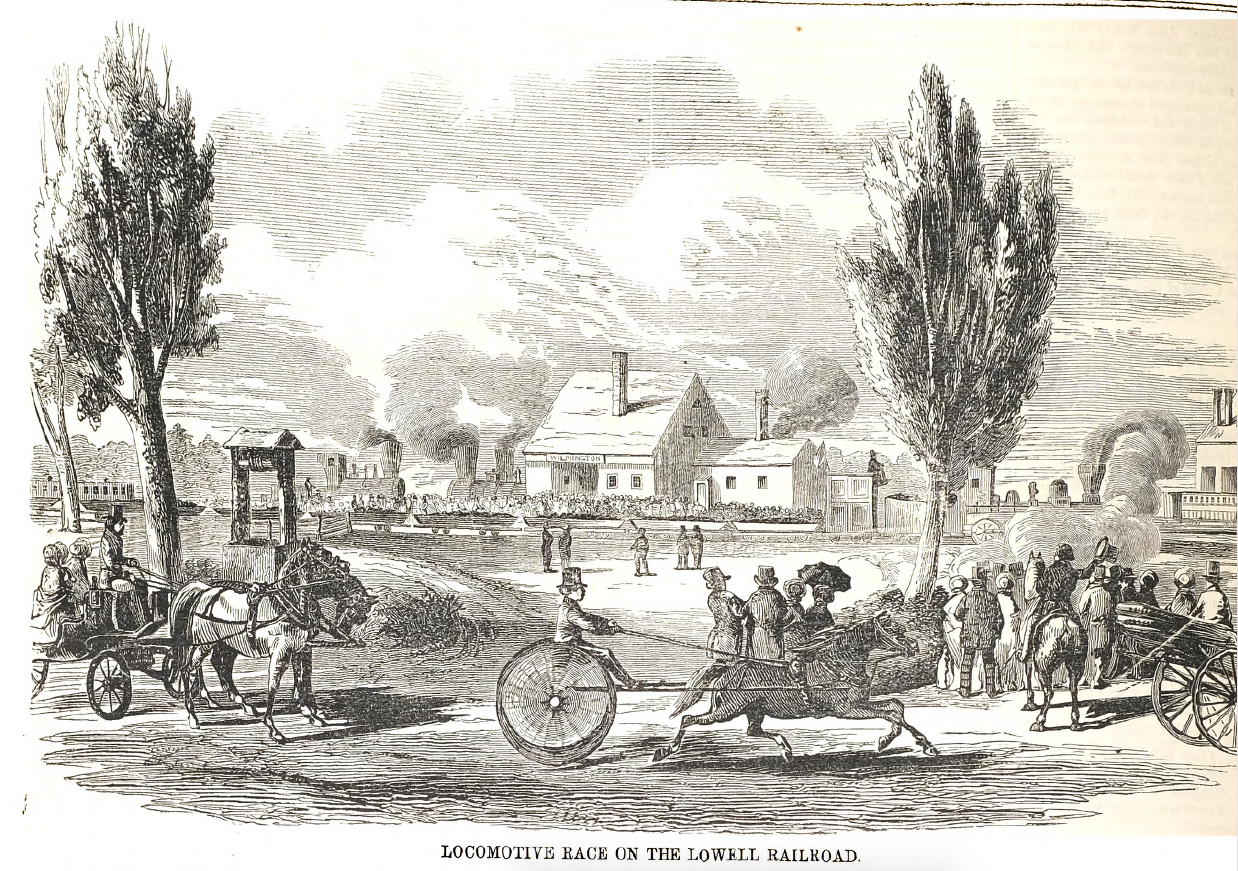 A trial of speed came off at Lowell Mass. not long since between a number of iron horses. As it presented an occasion of considerable interest and attracted many people to witness it, we have sketched the same for our columns, and present it herewith.

Of course, we give it at a glance, as it appeared, and do not pretend to present its various stages. The engines were made to do their best, drawing heavy trains after them, at a speed varying from forty to fifty miles to the hour. The distance run was nine miles exactly, and on this distance the general average was made up. A detailed account of the matter would be of no interest at this time, therefore we give the readers of the Companion only a picture of the scene of the race course etc., where the iron horses contested for the palm.

What would our good old Puritan forefathers have said, half a century ago, at such an idea? These are, indeed, fast times. Blood horses are behind the age; nothing short of steam stands any chance of keeping pace with this go-ahead period, and even this motive power bids fair to be supplanted by a still more subtle agent ere many years shall elapse.
- Gleason’s Pictorial Drawing Room Companion, October 25, 1851

A plan & profile of the Boston & Lowell Railroad 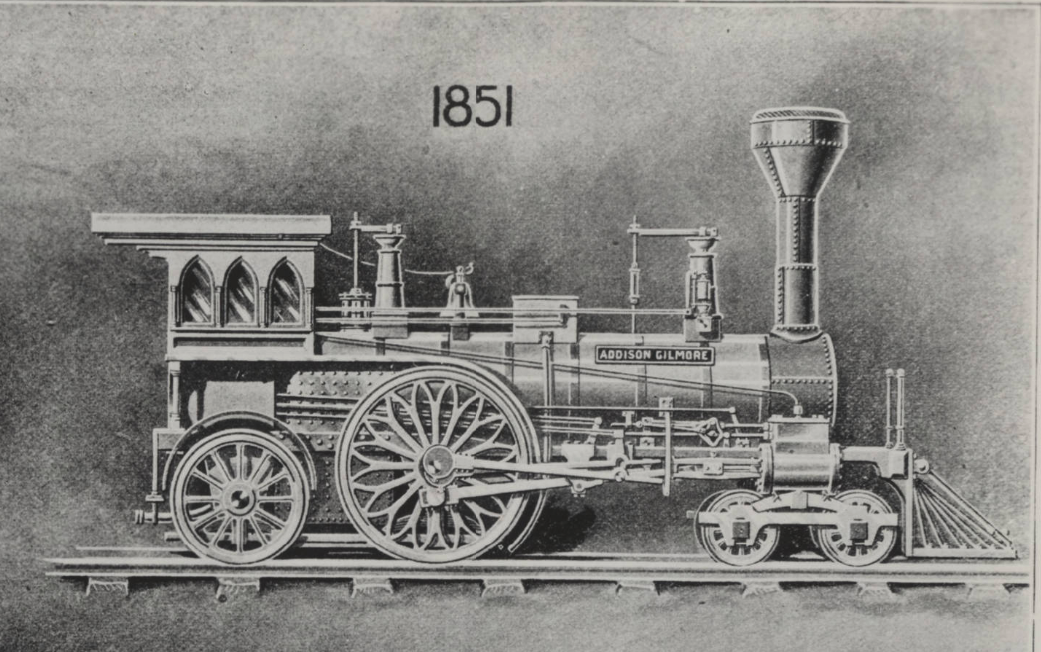 "1851. ''Addison Gilmore.'' First with outside oilers, inclosed cab and spliced frame. B. & A. Railway."
Detail from Graphic History of the Locomotive. Twelve Charts. Chart No. 6. 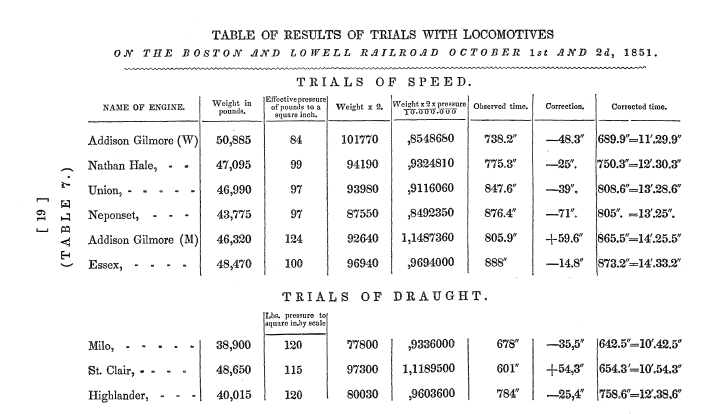 From Report of the Trial of Locomotive Engines. Made upon 1st and 2d October, 1851.

Lowell's Fair… Trial of the locomotives

The locomotive races to take place at the Lowell Fair which opens this week, Tuesday, are not for the mere purpose of amusement, but have a high and noble object in view, viz. to test the real mettle of the engine. For this purpose the Middlesex Mechanics’ Association by the community of arrangements issued a circular inviting the agents and superintendents of railroads and manufacturers of locomotives and railroad cars to exhibit at the fair some of their best locomotive engines.

This part of the exhibition will be open for inspection on Tuesday, the 30th of September, and on Wednesday and Thursday next following, there will be trials of speed on the Boston and Lowell Rd., near Lowell, and of power and draft on the disused track at the Boston and Maine Railroad in Wilmington between Boston and low and the B. and Maine roads. The agent of the Boston and Lowell Railroad has kindly offered to furnish loaded cars for trial of power and drag, and also fuel ready prepared, charge at cost only, the fuel to be of an equal quality, so that, in this respect, no advantage may be had by one locomotive over another.

The New England Association of Railroad Superintendents were invited to nominate three judicious disinterested persons to be confirmed by the government of the Middlesex Mechanics’ Association to act as judges and report upon this part of the exhibition on whose award medals and diplomas will be issued and awarded by the Mechanics’ Association. This has been done, and Waldo Higginson, L. Tilton, and Wm. P. Parot were appointed said committee, and all matters are now arranged for a fair trial of locomotives.

The value of such examinations and comparisons, as can be made on the occasion, is too obvious to require comment. The absolute results obtained by actual performance on carefully described tracks, and was loads precisely ascertained, cannot fail to be highly interesting and serviceable.

These are the kind of exhibitions we can heartily recommend as they tend greatly to promote improvements and add to our stock of useful knowledge. All those who have the management of this business are men of worth, talent, and possess aquirements of a high order. We hope there will be a strong attendance of railroad engineers.

LOCOMOTIVE FESTIVAL. On this subject, nothing official has as yet been ascertained, as to the number of engines which will be entered for the trial of speed and draft. The unfavorable weather has presented anything like completion in the way of returns. The Addison Gilmore, from the Western Rail Road, arrived this evening, as we say of distinguished arrivals, “in excellent health and spirits.”

Engines are expected from Manchester, Lawrence, Providence and Worcester. The Boston and Providence Rail Road were to send the Canton, but unfortunately that ox-smashing business incapacitated her for active life at present. The Boston and Lowell Rail Road will probably enter the Essex and Milo, the former in the trial of speed, the latter for draft.

Trial of speed will take place to morrow, at such times between 8 o'clock, A. M., And 4 o'clock, P. M., as the tracks upon the Boston and Lowell Rail Road shall be disused. The distance run will be some 9 miles. The weight allowed will be 70 tons, including cars.

We would say to the public that the trial of speed will afford nothing more of interest than the passage of an ordinary train at any given point. The nature of the trial is such that no facilities can be afforded spectators, it being merely relative in its nature. “Report of progress” in the matter will be afforded our readers at the earliest moment.

The trial of draft, which is to take place, as before mentioned, on the disused track of the Boston and Maine R. R., at Wilmington Depot, on the B. & L. R. R. will afford an opportunity for those practically interested to witness the power of the various engines entered. The extent run will be some 3 miles.

Altogether, the coming two days bid fair to cluster around them as much of novelty and interest as falls to the lot of any week day in this working world. The interest evinced in Thursday's proceeding will undoubtedly attract a large company from abroad.
- Lowell Daily Journal and Courier, September 30, 1851 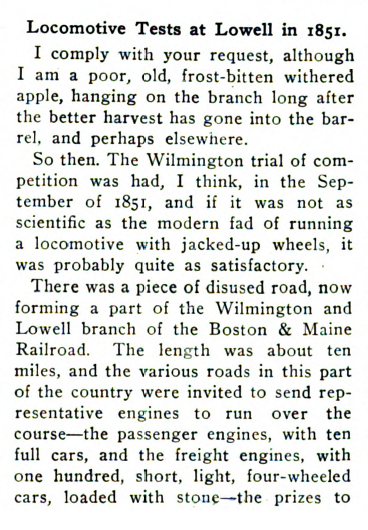 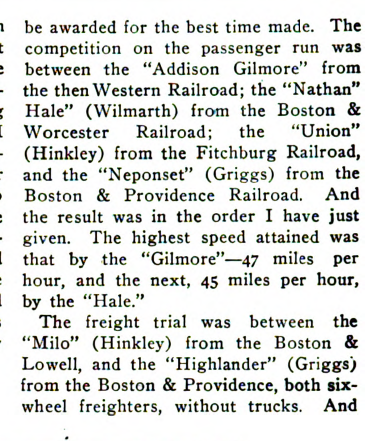 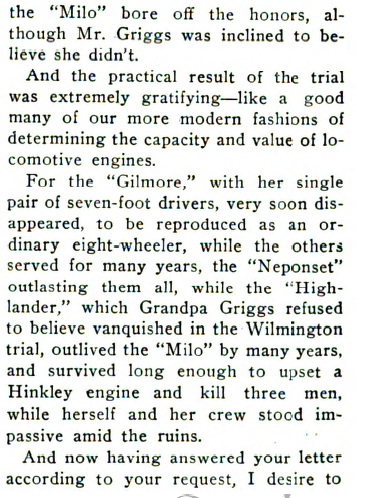 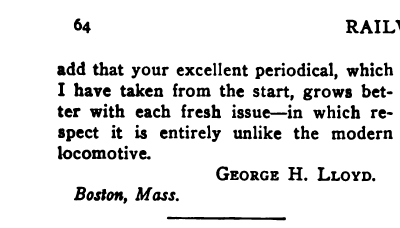