“To dismiss Spiritualists as a "lunatic fringe" is to ignore the significant ways in which their faith reflected the values of Victorian America. Every practice or idea developed within Spiritualism was an extreme form of an idea already afloat in American culture.”
- Ann Braude, Radical Spirits (2001)

“He [John C. Dalton, M. D.] says: ‘My life has been emphatically a happy one. Not free, of course, from the natural vicissitudes. Although neither a Swedenborgian nor a Spiritualist, I enjoy communion with near and dear friends, who ·from time to time have gone to enjoy the nearer presence of their Creator.’”
- A Memorial of John C. Dalton, M. D. An Address Delivered before the Middlesex North District Medical Society, April 27, 1864, by John O. Green. M.D. Lowell

Spiritualism, defined here as the belief that living people can communicate with people who have died, grew in popularity in the United States from 1848 through the 19th century and spiritualist organizations continued into the 20th century.

March 31, 1848 is often set as the beginning of the Spiritualist movement. This is the date that the Fox sisters first claimed that mysterious rapping sounds were communications from the spirit world. This event was the trigger for the rapid increase in popularity of the movement; however, many of the beliefs and ideas of the movement had already taken root.

Google Ngram for "Spiritualism" (all cases) and "rappings" (all cases). This Ngram lends support to the idea that Spiritualism was more than the Fox sisiters and rappings.

Lowell was one of the locations with the highest levels of spiritualist activity in the country, especially in the third quarter of the 19th century. 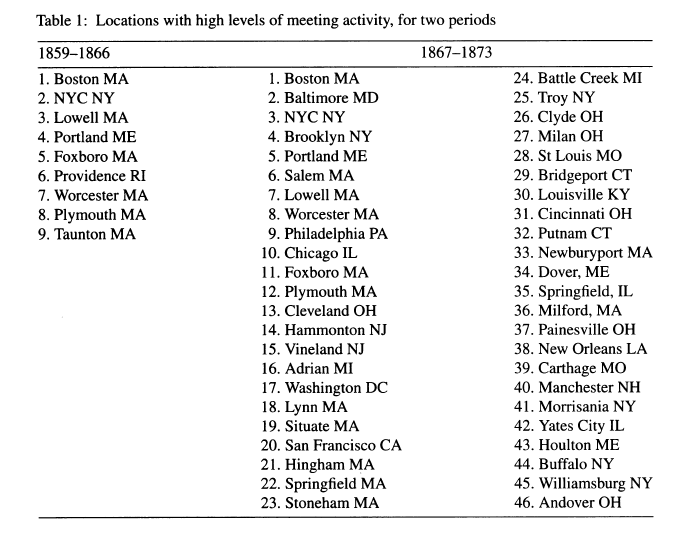 In the table above, locations 1 - 9 together, with Lowell at number 3, contributed about half of all the public meeting activity between 1859 and 1866 found in the Nartonis (2010) study.

Spiritualism, perhaps inevitably, became a subject for hucksters, charlatans, and con men and con women. Sometimes the frauds and tricksters swindled vulnerable and distraught people and sometimes their deceptions were primarily for entertainment value. There were also people who believed or were at least open to the possibility that spirits could communicate with or impart wisdom to the living. Most believers did not claim to be mediums, but were only curious and wanted to explore the possibilities presented by these beliefs.

While Lowell attracted plenty of the tricksters, it was also a center for those with sincere beliefs or curiosities about the concepts of Spiritualism.

Lowell had a good supply the factors that led to the growth of spiritualism in the 19th century.

Spiritualism wasn’t just seances. There were inquirers, questioners, seekers, the interested, the curious, the skeptics, and those looking to entertain and be entertained. Spiritualism was a broad spectrum of views with nothing approaching an orthodoxy, doctrine, or religion. Many saw themselves as genuine inquirers or “investigators”, looking for scientific evidence and empirical proof of the immortality of the soul by establishing communication with the spirits of the dead. As opposed to being creepy, Spiritualism was in many ways more optimistic than many of the beliefs of the era. Huge changes, discoveries, and paradigm shifts were taking place in the social/cultural, religious, economic, political, scientific/technological, medical, and areas.

In the social/cultural area, for example, Lowell had a large population and was close to Boston and accessible by railroad. There were numerous churches, lecture halls, and entertainment venues available. Considering the religious and philosophical atmosphere at the time, Lowell had a Swedenborgian Church, a diversity of religious beliefs including Freewill Baptist, Unitarian, Universalist, and Wesleyan Methodist, a rural or garden cemetery, and a community of Transcendentalists just up the Concord River.

Economically, it was the period of, rapid Westward expansion, The Gold Rush, urbanization, mass immigration, industrialization, railroads, and canals. Politically there were abolitionist and anti-slavery activities, Temperance movements, and women’s rights advocacy.

In the scientific and technological areas, there were scientific discoveries, advances, and inventions that did not seem to many people to be that different from Spiritualism, including magnetism, electricity, the telegraph, gravity, astronomy, and anatomy. In medicine, there was movement away from heroic, regular, orthodox medicine and towards irregular, heterodox, benign medical treatments, in addition to the recent discovery of ether. There was also public and professional interest in mesmerism or animal magnetism and phrenology. 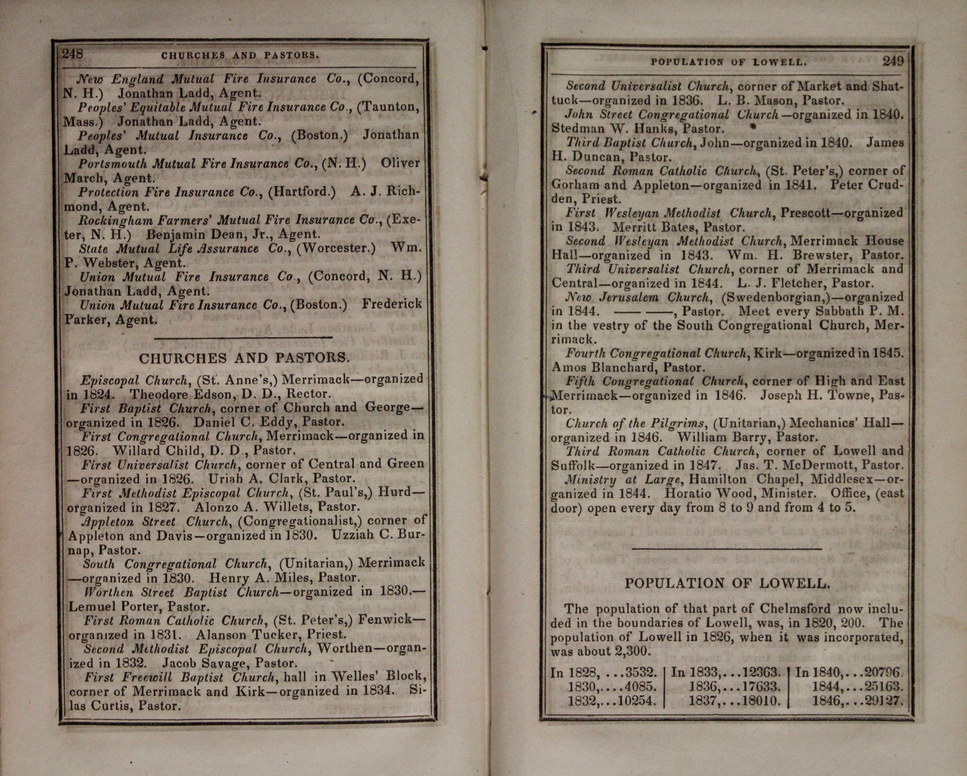 Churches and Pastors from the 1849 Lowell City Directory

Spiritualists of this era typically rejected hierarchy, doctrine, dogma, and formal organization. The following groups were mentioned in the newspapers and other primary documents at the time:

(Church of the) The First Spiritualist Society

The following halls, buildings, and churches were mentioned as places where Spiritualist meetings took place in the newspaper articles below (belief, curiosity, skepticism, and entertainment often overlapped).

Relevant Articles from the Lowell Newspapers

The following clippings were taken from Lowell newspapers of the era. While the emphasis is on events in Lowell, sometimes news from other areas is included.