There are two monuments to Passaconaway in Lowell.

The Passaconaway Statue in Edson Cemetery. 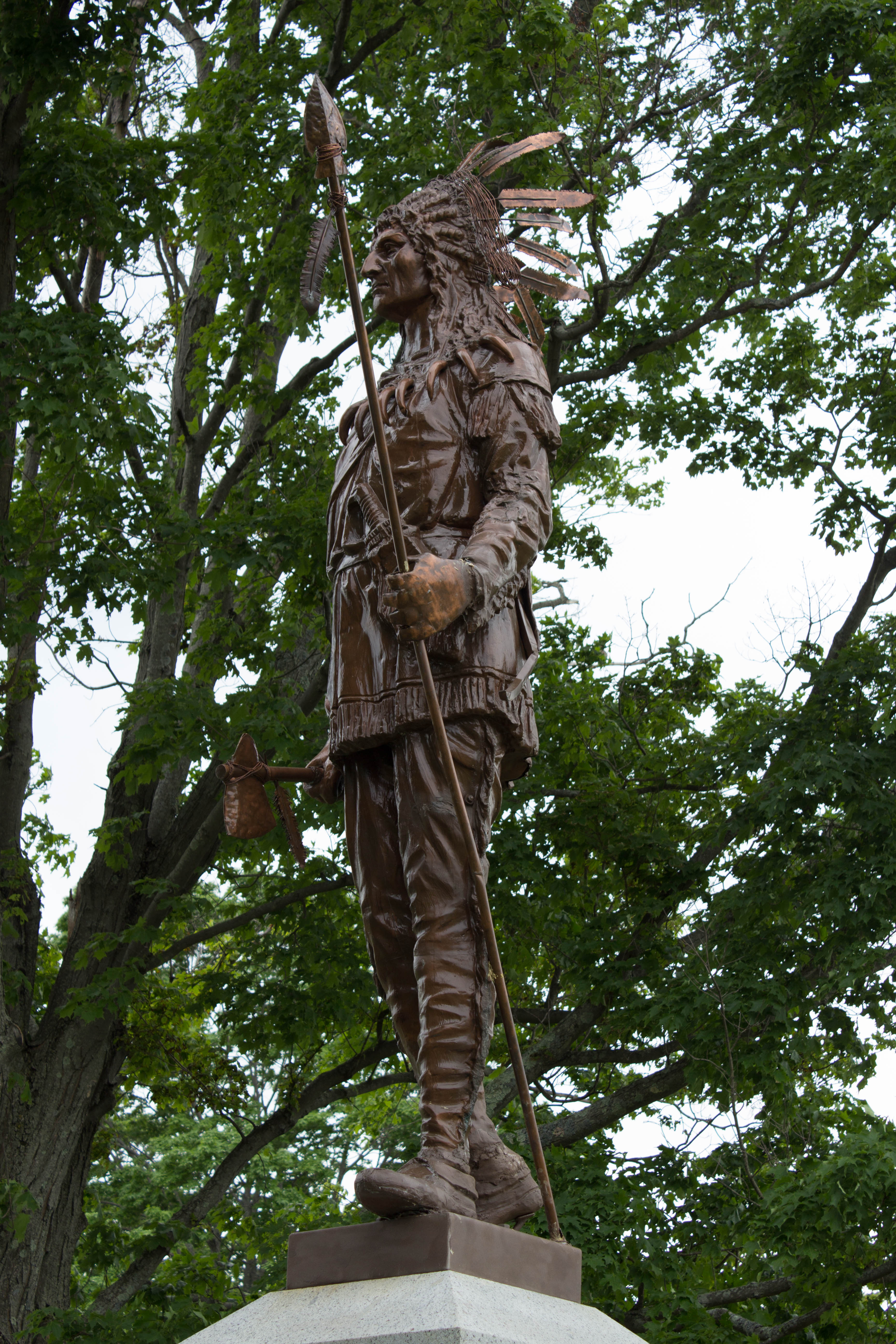 The plaque on the statue reads:

CHIEF
OF THE
PENACOOKS

GREAT WARRIOR AND FRIEND OF THE WHITE MAN

KNOWN AS
ASPINQUID - THE INDIAN SAINT

PROPERTY OF
IMPROVED ORDER OF RED MEN
OF MASSACHUSETTS

Note: While some people believe that Aspinquid was a real person, it is more likely that he is a fiction created by white men based in part on Passaconaway. Over time, the story of the fictitious Aspinquid became conflated with the history of the real Passaconaway.  (See White Men Invented Saint Aspinquid)

Also note: The Improved Order of Red Men is a fraternal organization established in 1834 that was formed by white men and only white men were allowed to be members.

The Memorial to Passaconnaway, an inscribed stone on the Merrimack River by the Pawtucket Falls.

The plaque on the stone reads:

CHIEF OF THE PAWTUCKET INDIANS

PRESENTED BY THE MOLLY VARNUM CHAPTER D. A. R.

GIVEN TO THE CITY OF LOWELL 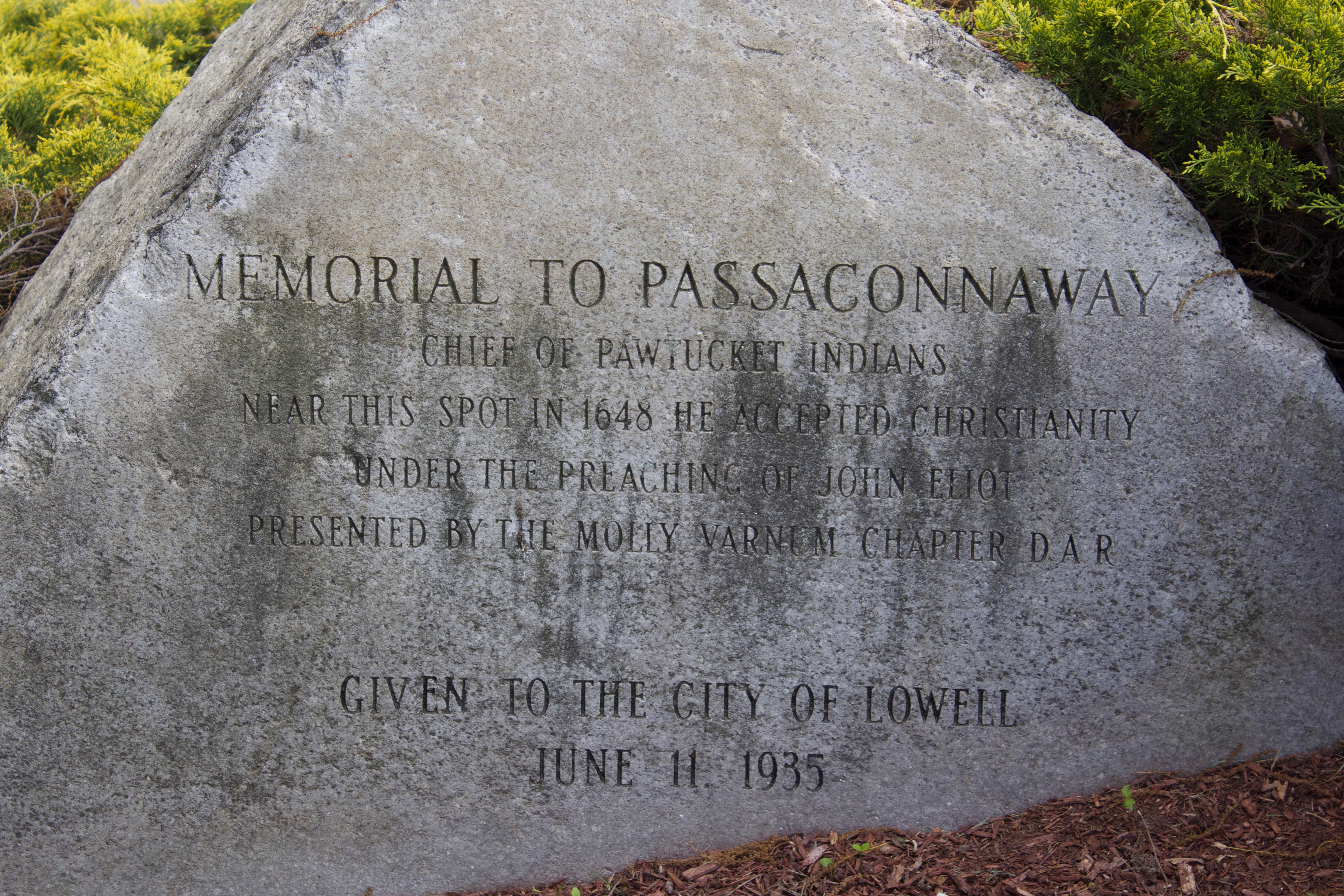 Wannalancet is memorialized in two places.

AND LIKE HIS FATHER PASSACONWAY
A FAITHFUL FRIEND TO THE ENGLISH. 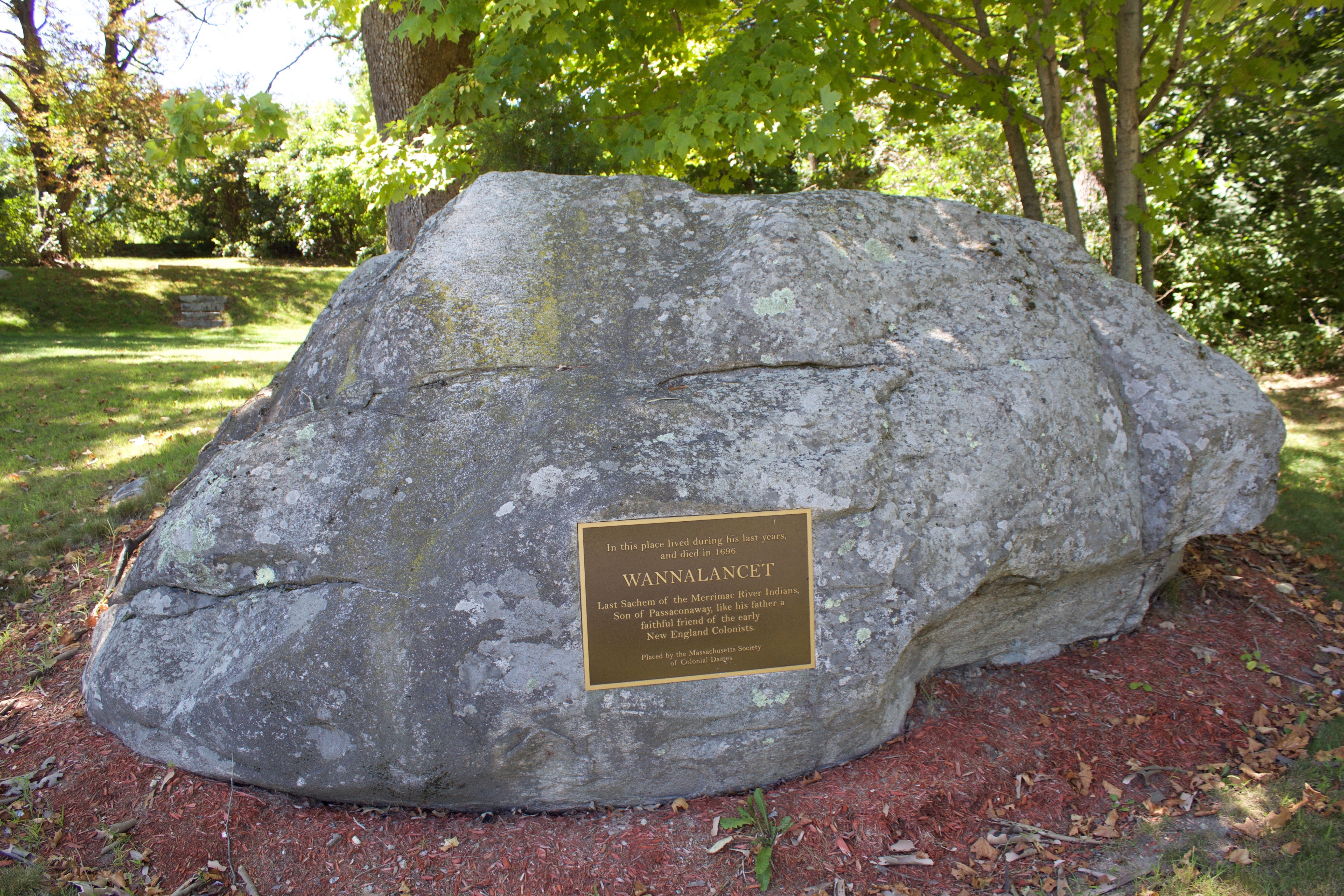 The bronze plaque on the rock reads:

In this place lived during his last years,
and died in 1696

Son of Passaconaway, like his father a
faithful friend of the early
New England Colonists.

Placed by the Massachusetts Society
of Colonial Dames 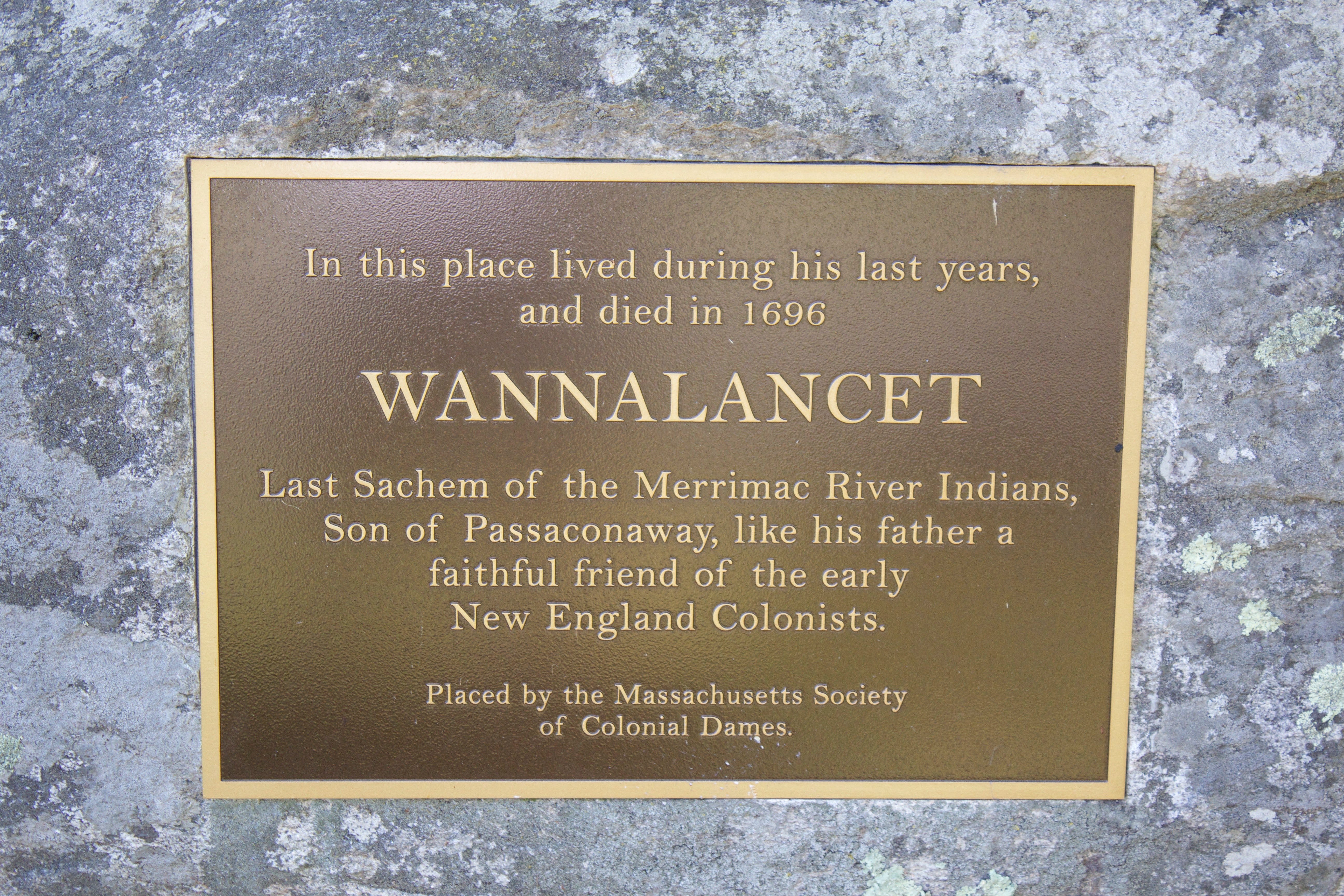 In a kiosk at the site is the following text -

On this day a bronze tablet from the Murdock Parlor Grate Company of Boston. Designed by John Fitz was dedicated in honor of Wannalancet, last grand chief of the Merrimack River Indians. This land presented to the town of Tyngsboro by the heirs of the late Jacob Drake.

The dedication was conceived by Charles Cowley of Lowell. The tablet was dedicated by the Massachusetts Society of colonial Dames. Wannalancet was converted to the Christian faith on Sunday, May 5, 1674 through the efforts of John Elliot, apostle to the Indians.

Honorary guests included the Misses Melinda and Charlotte Mitchell of the Lakeville, Massachusetts, great-great granddaughters of Massasoit, chief of the Wampanoags, and their great grandmother being "the Lily of the Cherokees" sister of King Phillip.

Here on this spot lived Wannalancet, last grand chief of the Merrimack River Indians, son of Passaconaway, during the final years of his life.

Returning to his tribal grounds in his declining years, Wannalancet lived under the care of Colonel Jonathan Tyng in the mansion that stood behind this spot. The aged chief spent many hours at this rock with full view of the Merrimack and his beloved island, Wicasauk.

Upon his death, Wannalancet was buried in the Tyng family burial ground. He remained a true friend of the colonists throughout his life, heeding the advice of the great Passaconaway to remain at peace with the English.

During King Philip's war he and his people moved to St. Francis in Canada to avoid hostilities. The general court convinced Wannalancet to return to ensure peace in the area. Here his final years were spent, and upon this rock the great sachem contemplated his life and times upon the Merrimack.

While on his Evangelical tours, Reverend Whitfield stood upon this rock to preach to the congregation of early settlers.

THIS MANSION WAS BUILT IN 1676
BY COLONEL JONATHAN TYNG FOR
WHOM THIS TOWN WAS NAMED. IT WAS
THE NORTHERLY OUTPOST TO THE
GARRISON HOUSE WHICH STOOD A
QUARTER-MILE DOWN STREAM
OPPOSITE WICASSEE FALLS AND
ISLAND WHERE THE PAWTUCKET
INDIANS WERE SETTLED. 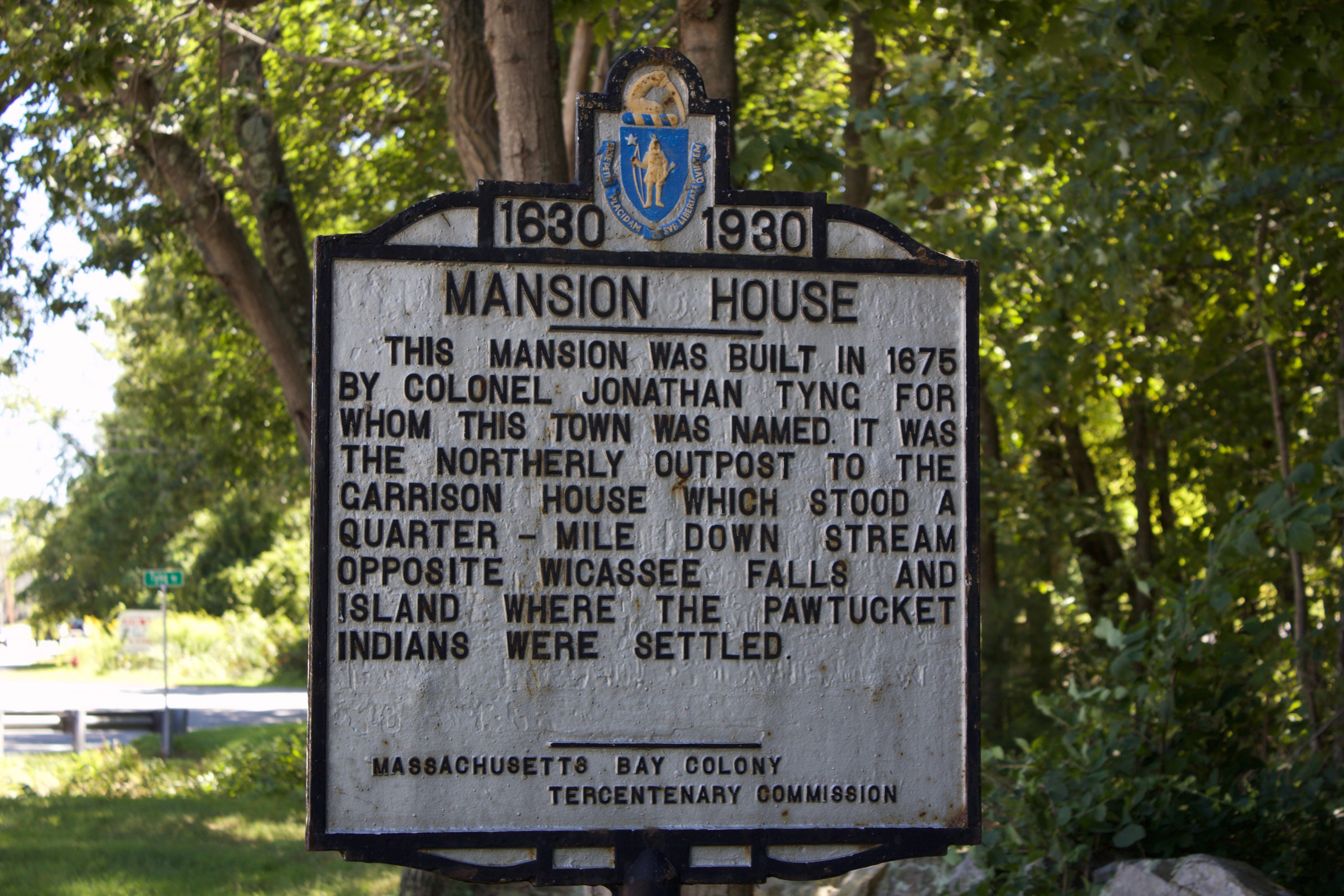 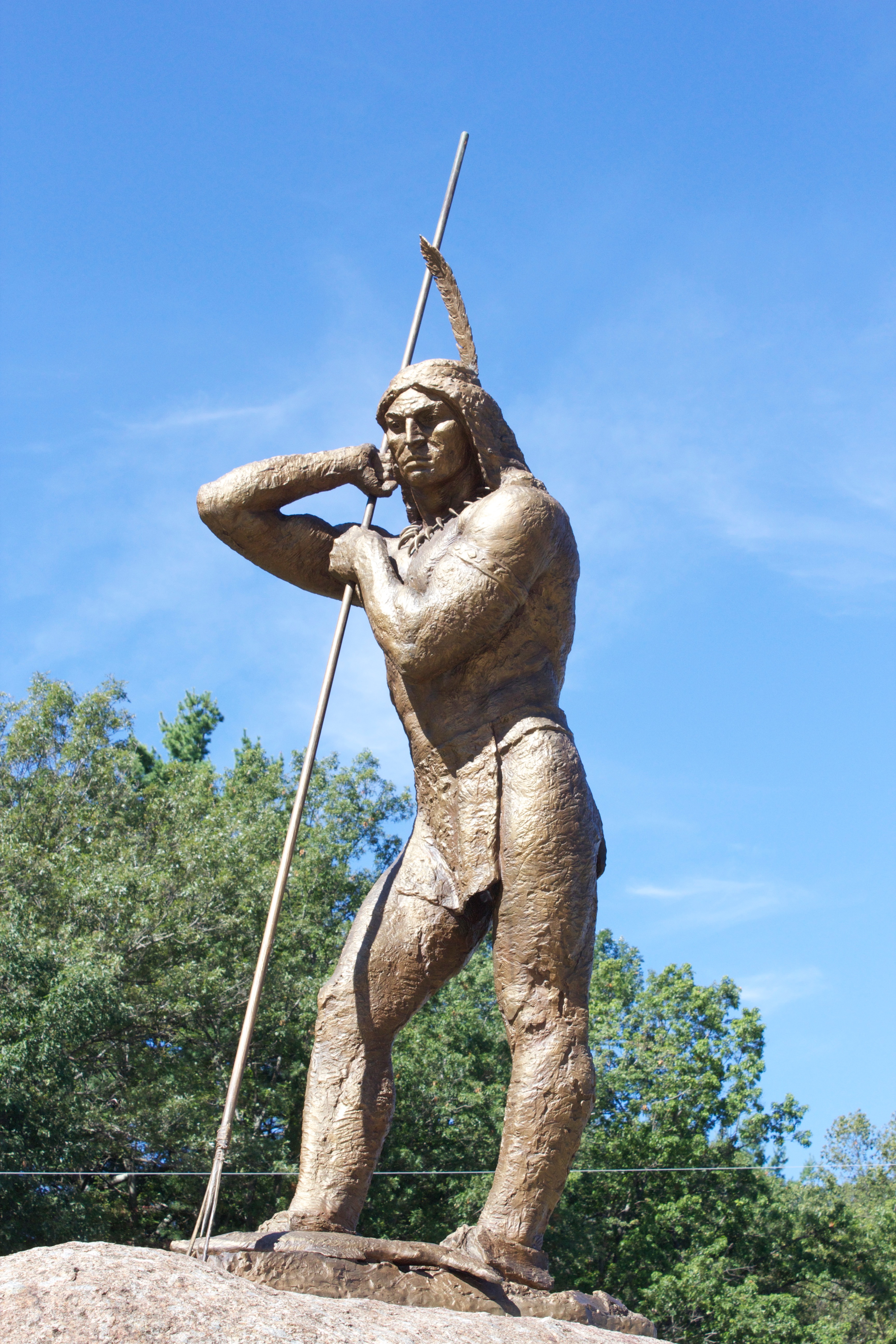 Statue of the Wamesit in Tewksbury

A plaque in the park reads:

DEDICATED IN MEMORY OF A PROUD, PEACE LOVING
PEOPLE, WHO INHABITED THESE LANDS   UNDER THE
RULE OF PASSACONAWAY, THE GREAT SACHEM AND
BASHABA, AS RECORDED BY THE REVEREND JOHN
ELIOT IN THE YEAR OF 1648 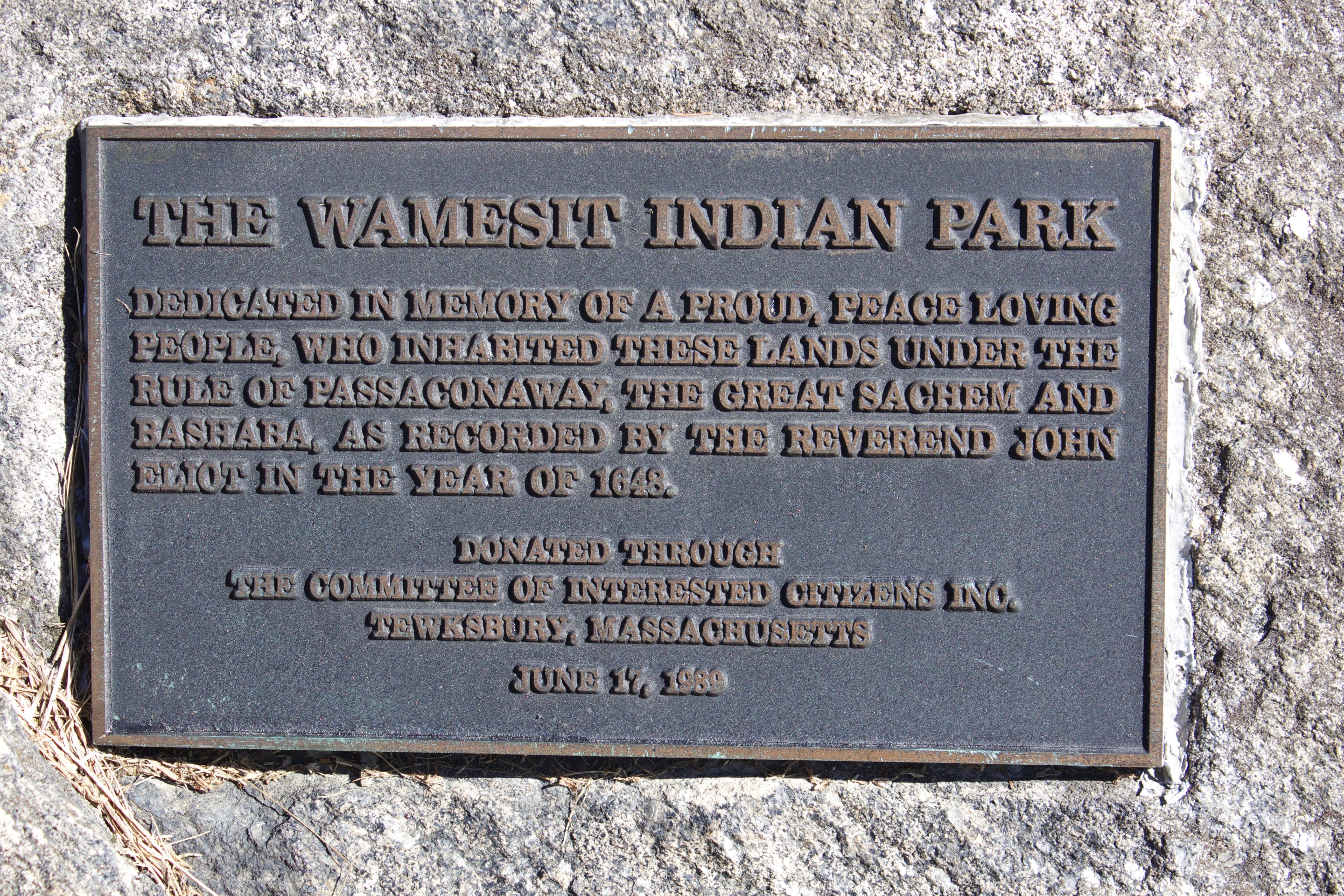 Meetinghouse Hill Marker at the Eliot Church in Lowell. 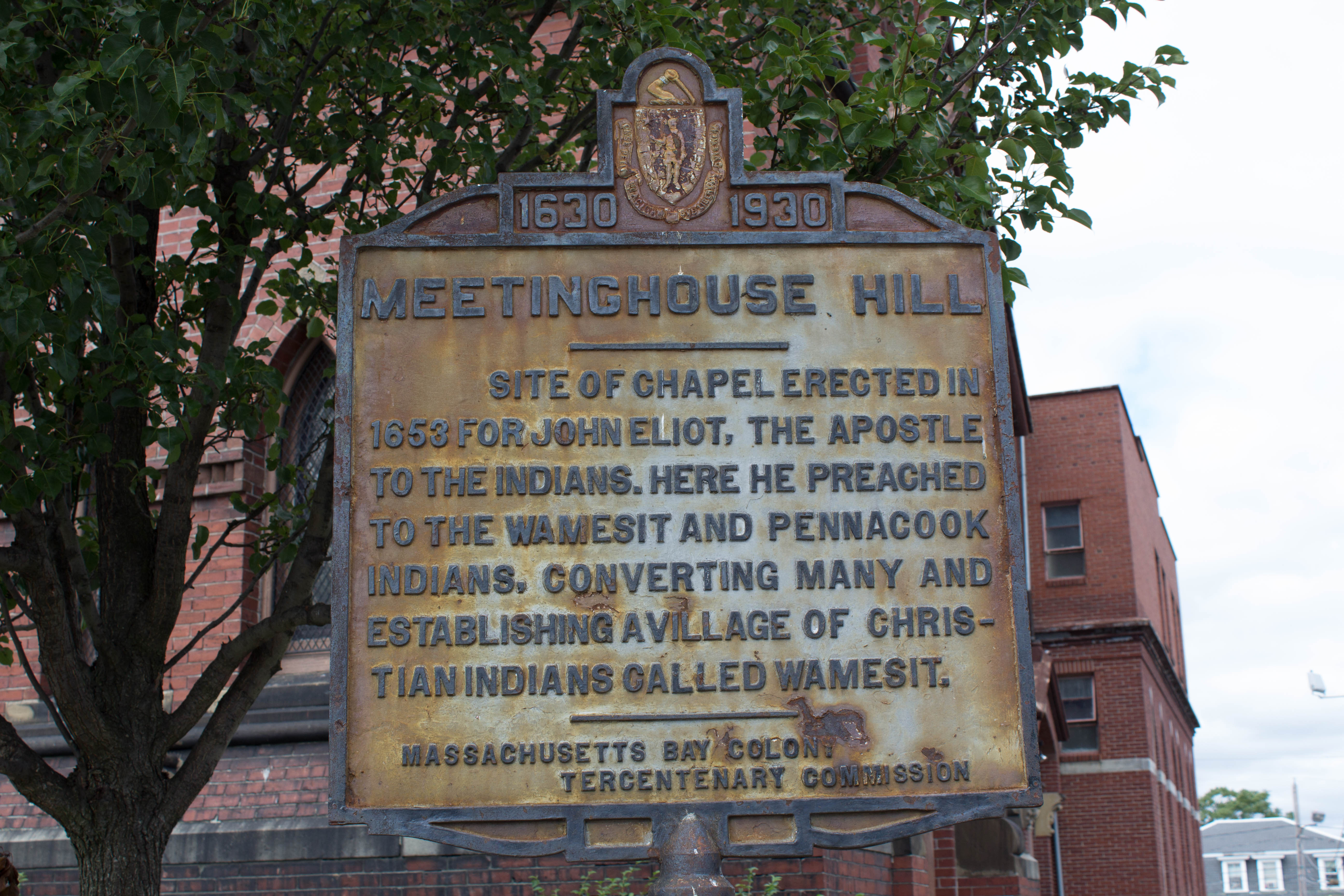 SITE OF CHAPEL ERECTED IN
1653 FOR JOHN ELIOT, THE APOSTLE
TO THE INDIANS. HERE HE PREACHED
TO THE WAMESIT AND PENNACOOK
INDIANS. CONVERTING MANY AND
ESTABLISING A VILLAGE OF CHRIS-
TIAN INDIANS CALLED WAMESIT. 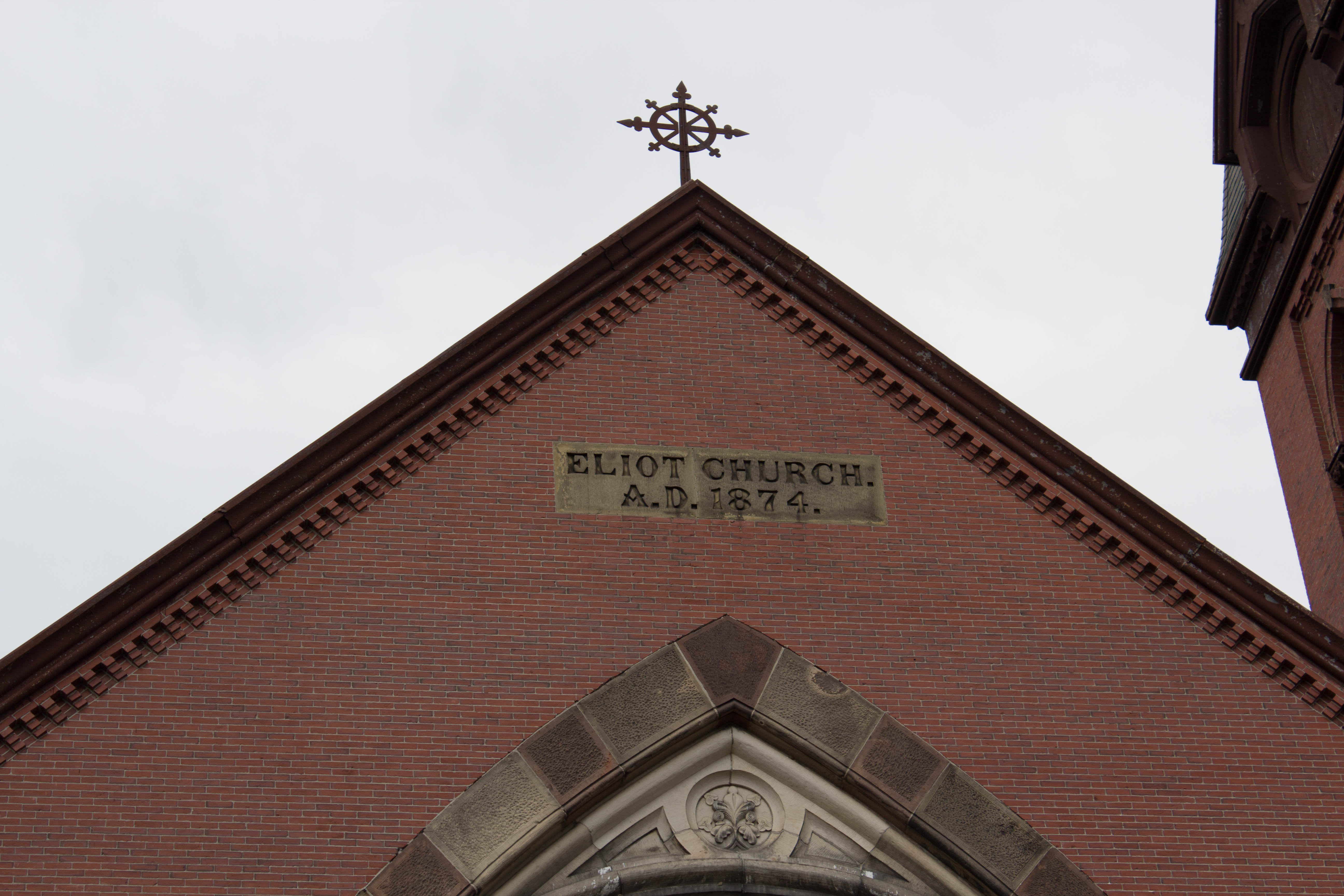 The agreement signed by Nahnaacomoc and Passaconaway on June 12, 1644, can be viewed on microfilm at the Massachusetts Archives along with other deeds and records from this period. They are in the Massachusetts Archives Collection, Volume 30. The image below was photographed from the microfilm an changed the white on blue of the film to black on white. Notice the “marks” of Nahnaacomoc and Passaconaway at the bottom,. Passaconaway's mark is enlarged beneath the deed. 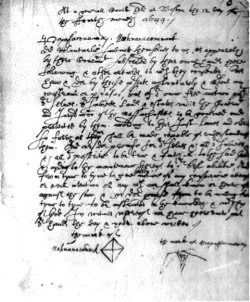 He buys the Indian's moccasins and baskets, then buys his hunting-grounds, and at length forgets where he is buried and ploughs up his bones. And here town records, old, tattered, timeworn, weather-stained chronicles, contain the Indian sachem's mark perchance, an arrow or a beaver, and the few fatal words by which he deeded his hunting-grounds away.
- Henry David Thoreau, A Week on the Concord and Merrimack Rivers

Books about the early history of the Greater Lowell area including the Pawtucket, Pennacook, and Wamesit  Indians

Allen, W. (1820). The history of Chelmsford: From its Origin in 1653, to the year 1820--together with an historical sketch of the church, and biographical notices of the four first pastors. To which is added a memoir of the Pawtuckett tribe of Indians. With a large appendix. Haverhill, MA: P. M. Green. Available at Google Books and archive.org at. https://archive.org/details/historychelmsfo00allegoog

Cowley, C. (1904).  “The Last of the Sachems,” in Contributions of the Old Residents’ Historical Association, Volume VI. Lowell: The Courier Citizen Company. Available at Google Books.

Kenngott, G. F. (1912). The record of a city: A social survey of Lowell Massachusetts. New York: The Macmillan Company. Available on archive.org at https://archive.org/details/recordofcitysoci00kenn.

Leavenworth, P. S. (1999)  “’The best title that Indians can claime’: Native agency and consent in the transferal of Penacook-Pawtucket land in the seventeenth century”. New England Quarterly: A Historical Review of New England Life and Letters (72), 275–300.

Miles, H. A. (1846). Lowell, as it was, and as it is, (Lowell: Massachusetts, Powers & Bagley). Available at https://archive.org/details/lowellasitwasasi00mile and at Google Books.

Books and articles about Indians in New England

Burrage, H. S. (1887). Rosier's relation of Waymouth’s voyage to the coast of Maine, 1605 with an introduction and notes. Portland, ME: Stephen Berry.

Cronon, W. (1983). Changes in the land: Indians, colonists, and the ecology of New England. New York: Hill and Wang.

Drake, S. G. (1837). Biography and history of the Indians of North America, from its first discovery to the present time. Boston: Antiquarian Society. Available on archive.org at https://archive.org/details/cihm_39796.

Kruer, M. (2003). “A Country Wonderfully Prepared for their Entertainment”: The aftermath of the New England Indian epidemic of 1616. Journal of the National Collegiate Honors Council, 4(1).

Artifacts at Peabody Museum of Archaeology and Ethnology

The following artifacts, which were found in Lowell, are in the collection of the Peabody Museum of Archaeology and Ethnology at Harvard University. They are in storage and not on display. 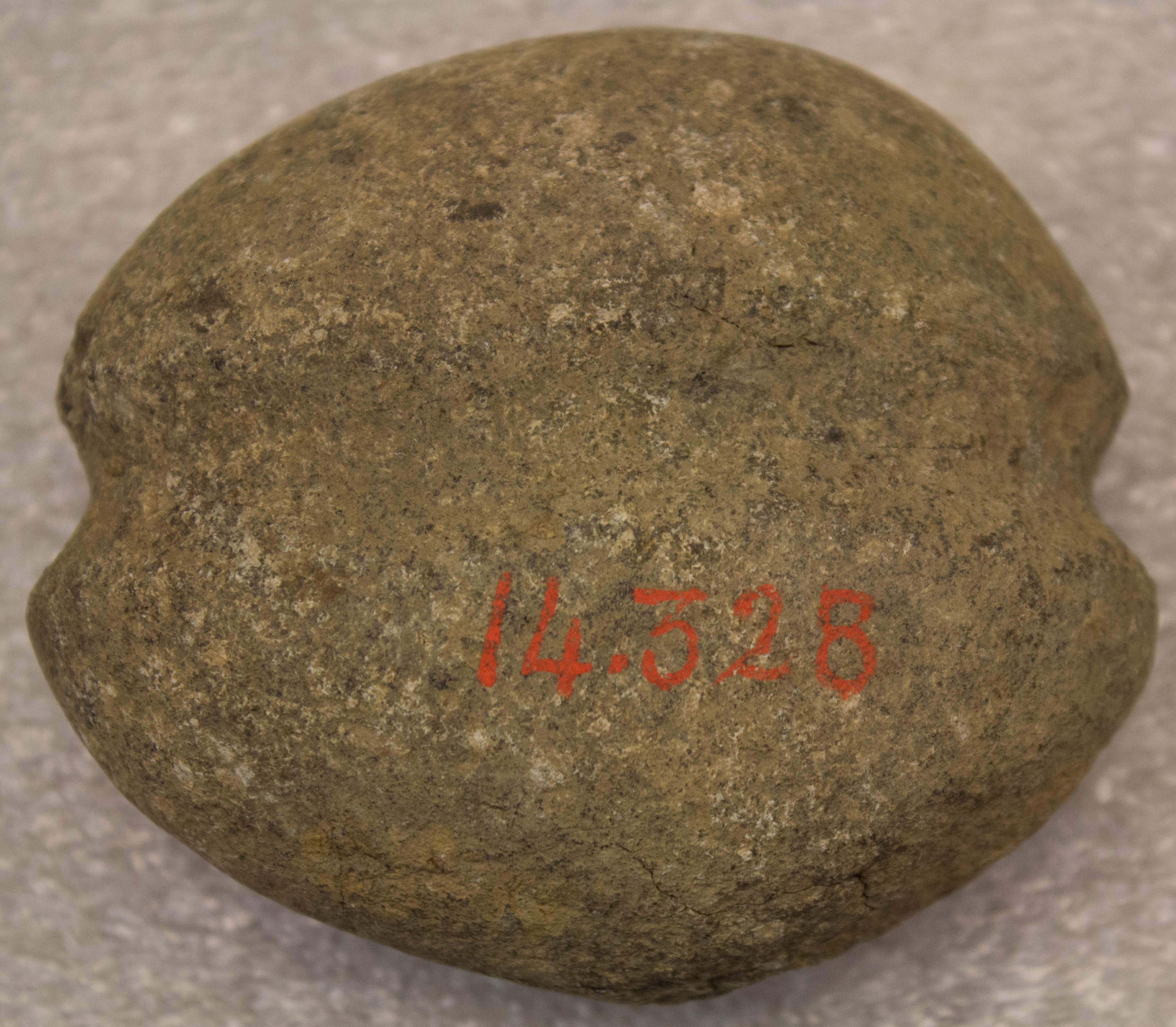 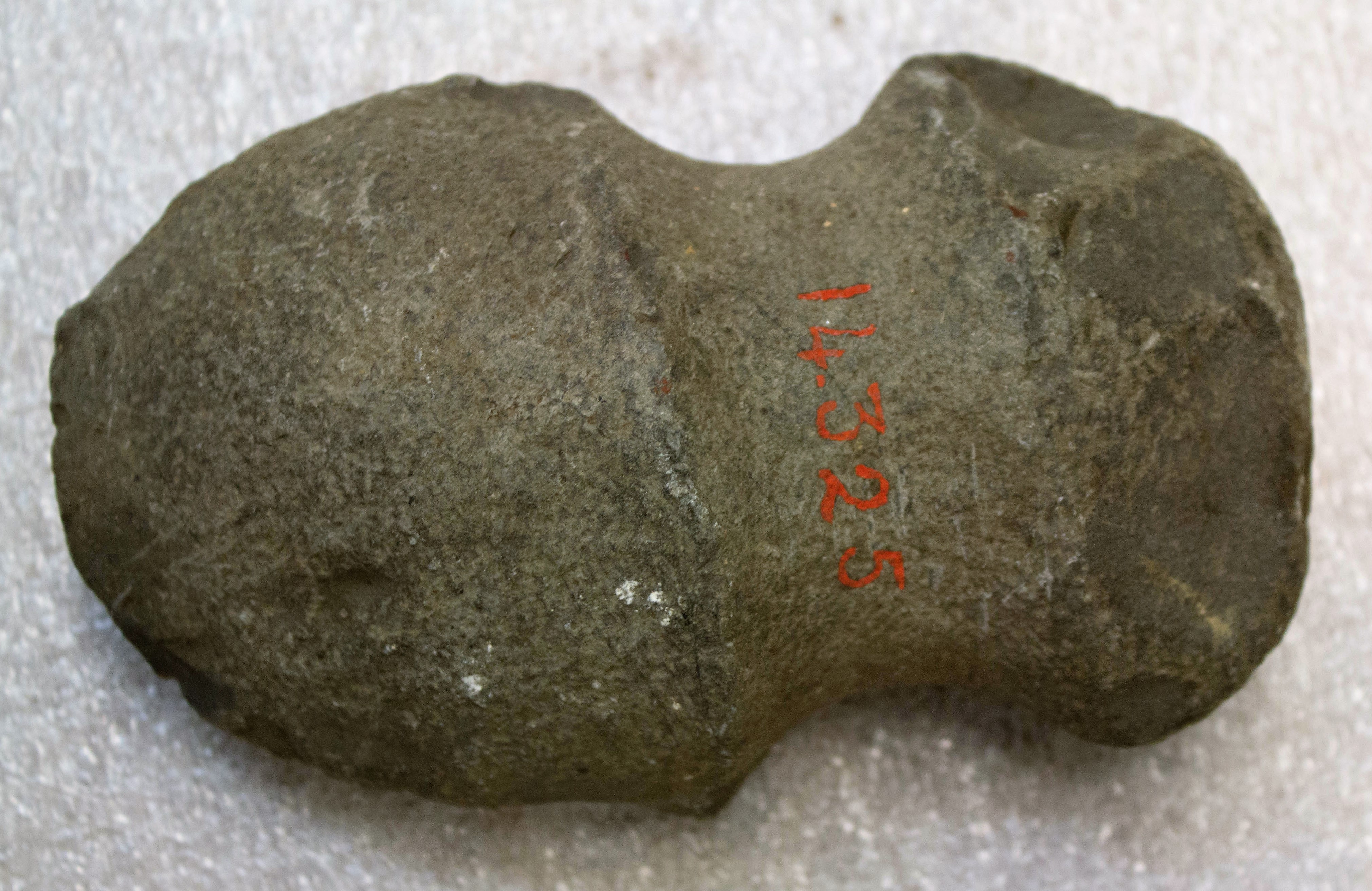 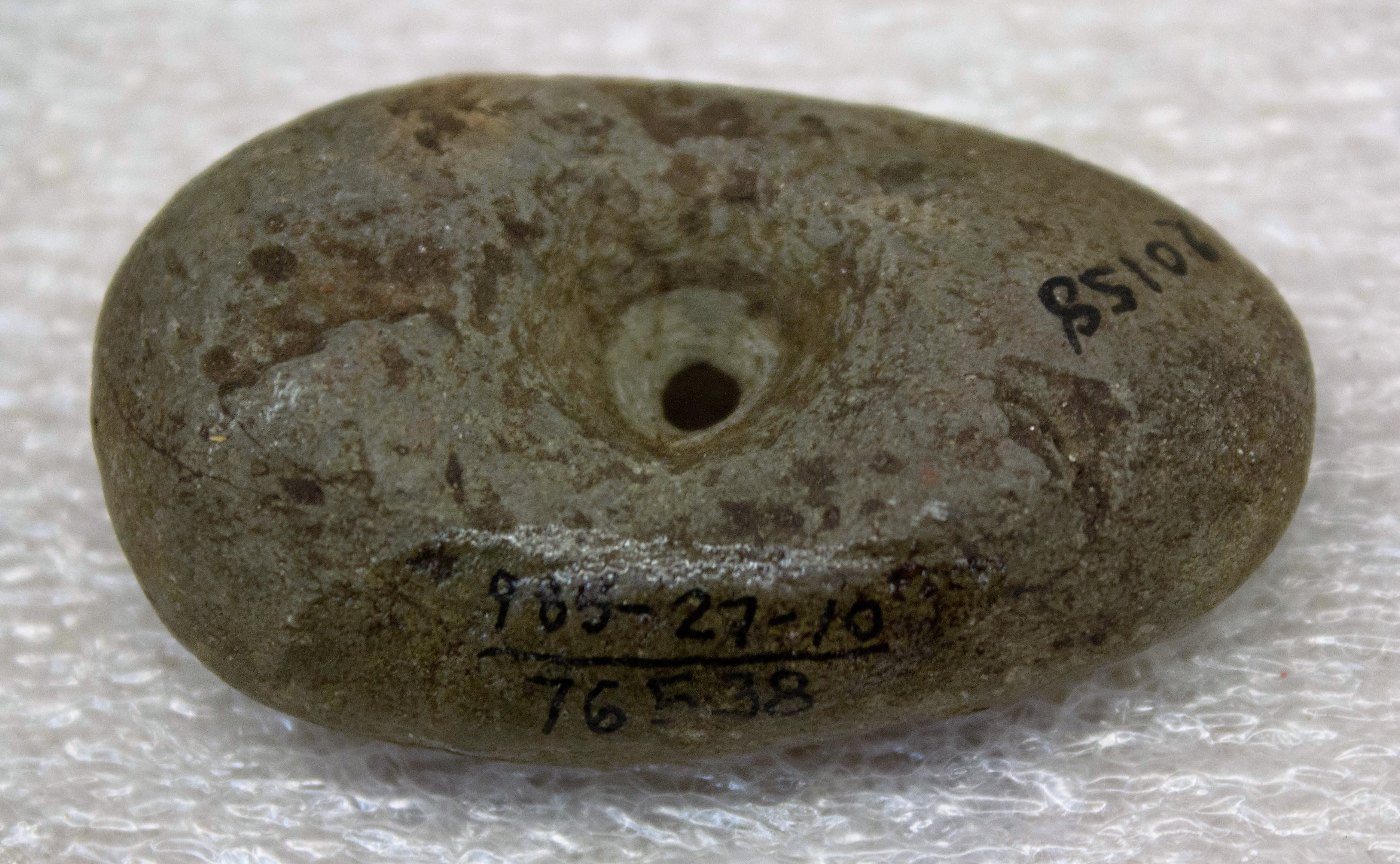 * (Note from Brad MacGowan: Although I am far from expert in this field, I believe that this might be a plummet or sinker for fishing rather than a perforator. I am interested to here what other people think about this.) 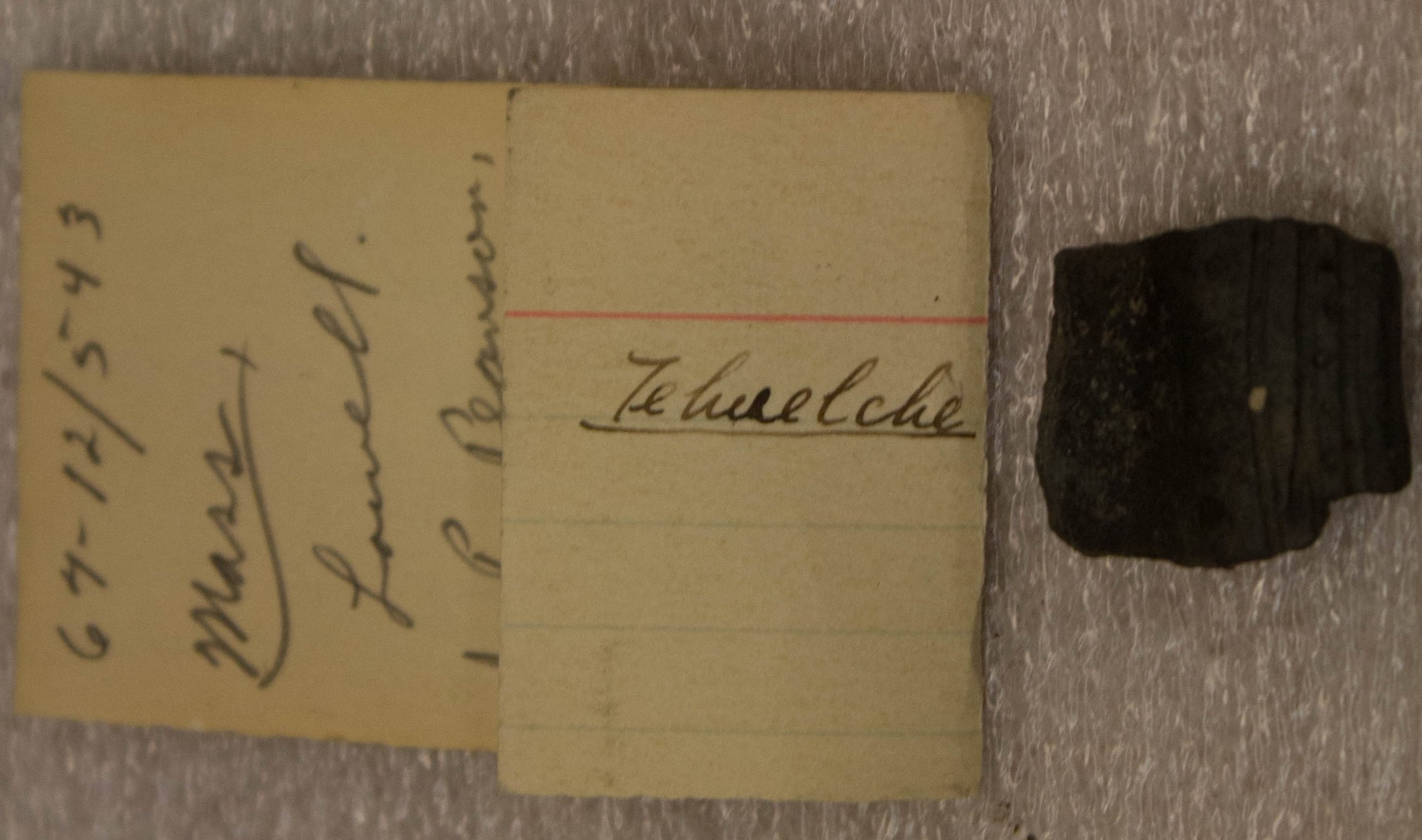