as by little advantages that occur every day. 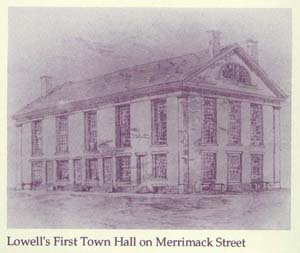 On March 6,1826 the town of Lowell held its first town meeting at the “Tavern of Messrs. Balch & Coburn,” which was located near Pawtucket Falls.  With a vote of the (all male) residents present, selectmen, a school committee, and a representative to the state legislature were elected. For the next five years, Lowell's town meetings would be held at the Merrimack Hotel.

In 1826 Lowell had approximately 2,500 residents. In just four years, 1830, the population had grown to 6,474 residents.  Needing more meeting space and offices, Lowell built a town hall. The Town Hall combined a second floor for government offices with public markets on the first floor, which provided revenue for the town.

By 1832 Lowell's population had increased to 12,000.  The “town meeting” form of government, where every eligible resident could vote on each article, became unwieldy and impractical.  The Massachusetts General Court granted Lowell the third City Charter in Massachusetts on April 1, 1836.  The city government then consisted of a mayor, a Common Council, and a Board of Aldermen, together called the City Council.

Please note: The dates and the titles in the index below do not include all of the information on each page. They are provided for general navigation of the documents. There is a great deal of overlap of dates, meetings, reports, etc. within and between pages.

The population of Lowell at different periods: 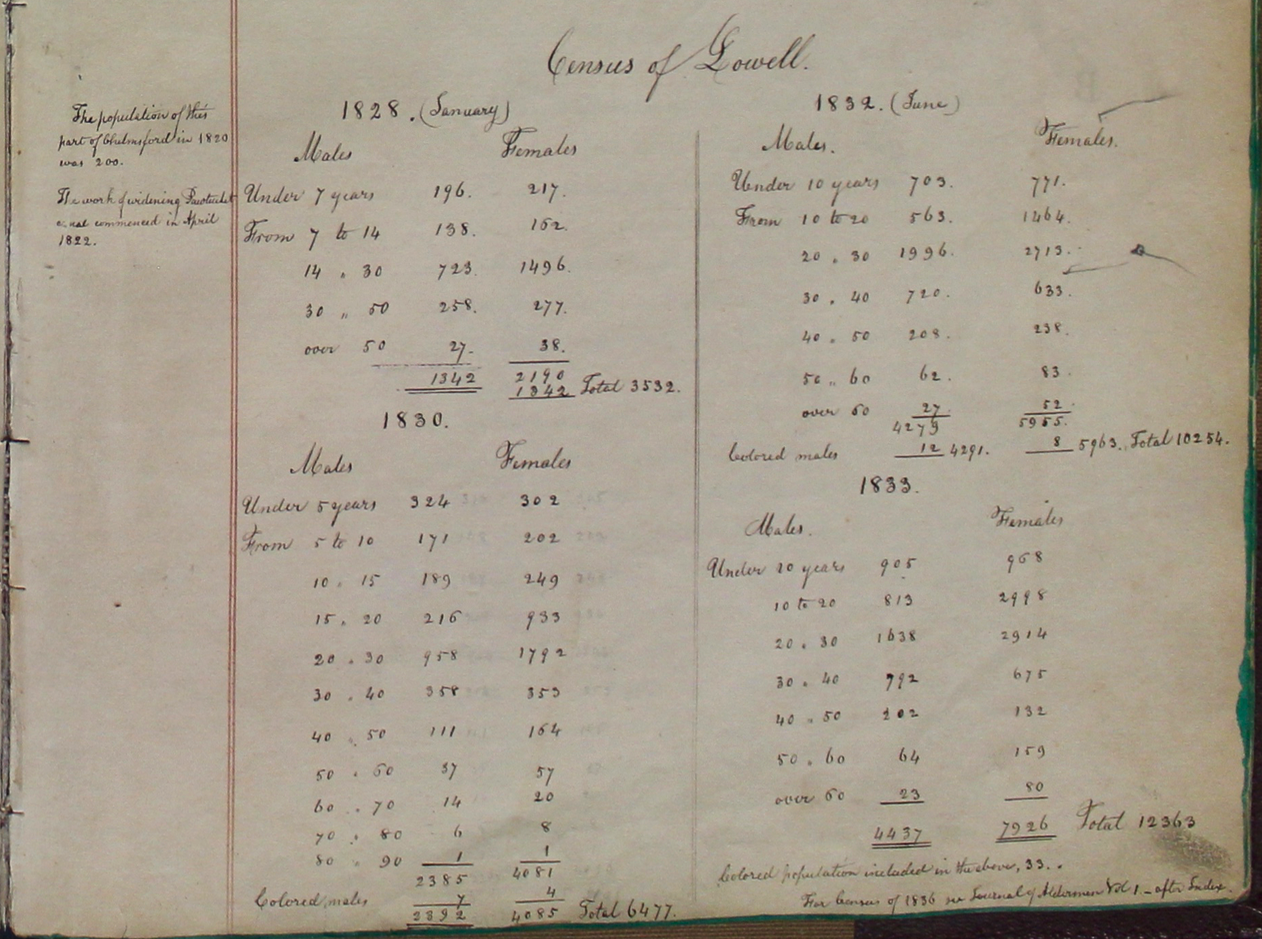 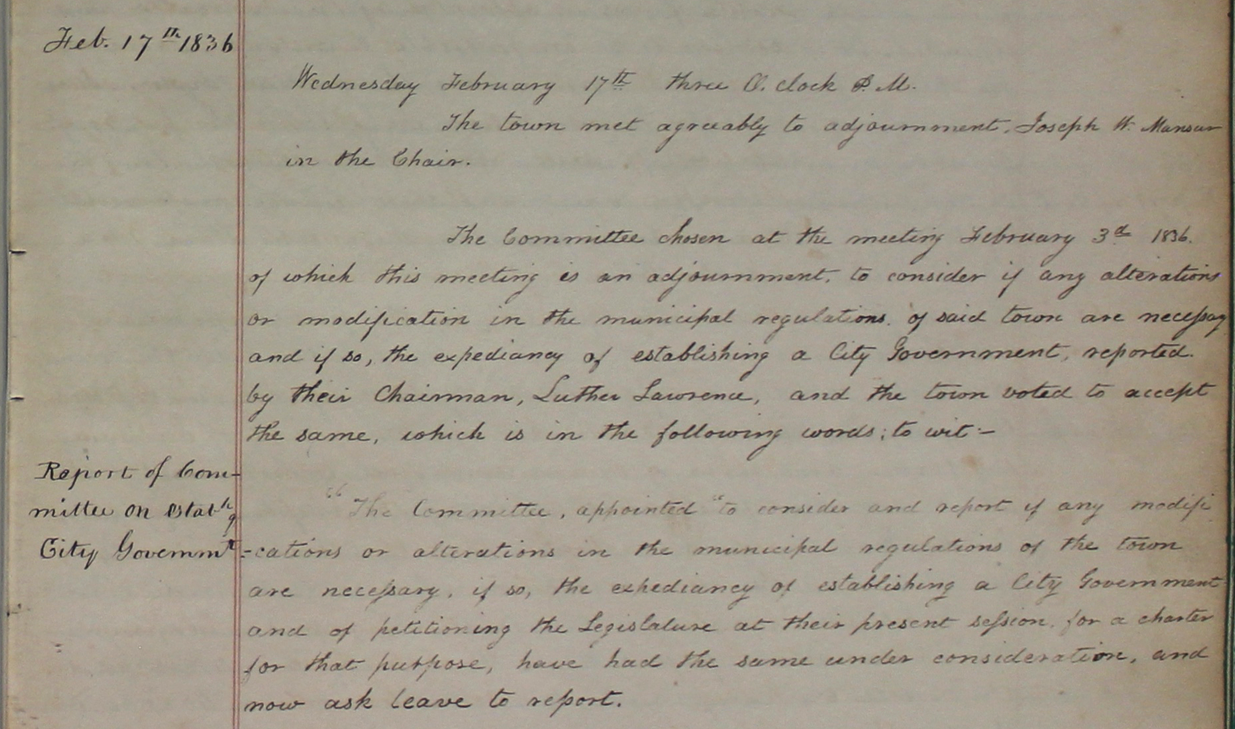 Our New England ancestors, among the first Acts after their arrival in this Country, marked out and divided such portions of their wilderness into towns, as they chose to improve and possess for their Government. Those laws were characterized very strongly by the peculiar manners and habits of the age, and were skillfully adopted to the resolute and self-denying spirit of their authors. Many of the statutes are now in form with little or no alteration. Such with the spirit and principles of most of them, that they are suited to all men and every condition of life, who cherish the love of civil and religious liberty and a determination to maintain and enjoy free and equal rights. Much and most of what is now or ever has been estimable in the New England manners and character may be ascribed to the influence of our municipal Regulations. Religious worship, free schools, the care of the poor and the Highways were the principal objects of early Legislation for towns. The first has ceased to be under the care of towns, the others with the preservation of the health of the people are now the great and engrossing objects over which towns extend their care. The existing laws are well adapted to the wants of towns of a small or moderate size in point of numbers but have been found insufficient for the efficient regulation of those that have a large population.

Special Legislation has been resorted to in many instances for large towns but in most cases, when the number were not sufficient to entitle them to a City Government. The principal defects in the operation of the present system of laws as it respects large towns, and especially Lowell, is the want of executive power, and the loose and irresponsible manner in which money for municipal purposes is granted an extended period is believed to be impossible to provide a remedy for these defects in this town under the present system. Such a modification of the laws is necessary, that the power of granting expending money and of executing the laws be so concentrated, that a direct and well-defined responsibility to the people may be imposed on those who have the administration of the Police.

Having thus expressed an opinion on the first proposition submitted, your committee now proceed to consider the second, to wit, the expediency of establishing the city government. This last proposition presents a grave question, that of changing the frame and form of our municipal government with which are identified much of our prosperity and happiness. In deciding this question, it is necessary to keep constantly before the mind, the number of our inhabitants, their dissimilar habits, manners and pursuits, the rapid and progressive increase of a population, the variety of interest and the constant changes which are taking place. It is certain that some change is necessary in our present system to preserve health, and to live in peace and security. Such a government as the well-being and prosperity of the town require in the opinion of your committee cannot in any way be so easily attained, as in the establishment of a city government. The town may continue a few years under the present system, but the time is near at hand, when there must be a change, and a city government, or something similar must be adopted.

The difference in the expense of the present system and the city government will necessarily be from one to two thousand dollars annually, and it may be less after the new government is put in operation, much however in that respect must depend on the provisions in the chatter of the new government and the administration under the charter should as much as possible retain and guard against extravagance, and should grant to those entrusted with power no more patronage than is absolutely necessary for the prompt and faithful execution of the laws. Finally, your committee are of opinion, that it is expedient to establish a city government, and that the town petition the Legislature now in session to grant a charter for that purpose, and they beg leave to report the results below for that purpose.

All which is submitted
per order
Luther Lawrence, Chairman

Resolved, that it is expedient, that the town of Lowell become a city, and that be a committee to draft a petition, and present the same to the Legislature now in session to grant a charter to make said town a city and establish a city government therein.

Resolved that be a committee to draft a charter for the purpose aforesaid and present the same said town as soon as may be for their consideration and approval.

Please note: The dates and the titles in the index below do not include all of the information on each page. They are provided for general navigation of the documents. There is a great deal of overlap of dates, meetings, reports, etc. within and between pages.

Pages 351 to end including Indexes