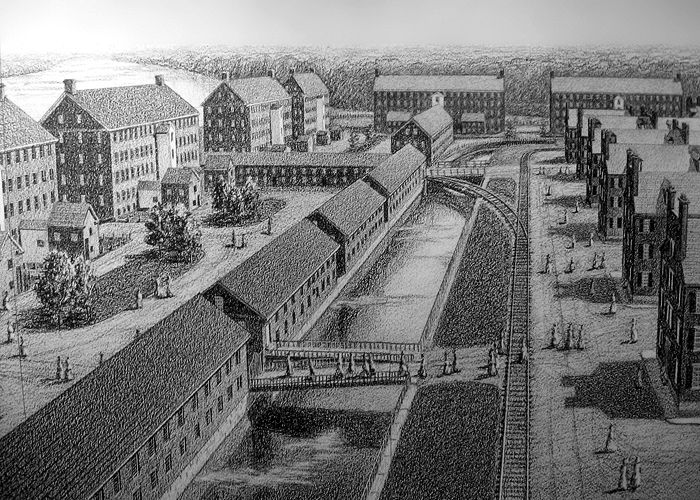 There were three major problems with transporting bricks in the 1820s and 1830s; bricks are heavy, Lowell needed tons of bricks, and the roads were challenging even for light loads.

So during this period, the bricks had to be transported by water.

This was not a problem for the terminus of the journey. Lowell had the Merrimack River with locks in place around the falls, and the Middlesex Canal. However, the brickyards where the bricks' journey started had to be on one of these waterways as well.

Men driving carts with a yoke of oxen or a team of horses and had to get the bricks to landings on the waterways, and the boatmen and their boats took it from there.

Millions of bricks were made in dozens of brickyards and they traveled to Lowell by boat thousands at a time.

The increase in the numbers of rail roads in the middle to the 19th century meant that brickyards did not have to be on a navigable waterway, but near a rail road track. That gave anyone who wanted to buy bricks more options.

Excerpt from the History of Bedford, New Hampshire

Excerpt from HISTORY OF BEDFORD New Hampshire From 1737 Being Statistics Compiled on the Occasion of the One Hundred and Fiftieth Anniversary of the Incorporation of the Town, May 15, 1900

The northwest corner of the town lies near the base of the Uncanoonuc mountains. The easterly part, bordering upon the Merrimack river, is a pine plain with some very productive intervals. In the west part of the town the land is uneven and abounds in stone, but the soil is warm and strong. The southern part is noted for its abundant supply of clay, suitable for brick yards. Years ago, from twenty to thirty brick yards were in operation dining a single season, millions of brick having been made here in a single year. Lowell and Lawrence, Mass., and Nashua and Nashville, 1ST. H., have been supplied with brick from these yards. Clay was also found on the Gordon farm near the center of the town, and brick were once made there, as the term, " brick yard field," still applied to one of the fields of this farm, abundantly testifies. There was also a yard on the Joseph Patten farm, and John Shirley made brick there.

For the first half of the nineteenth century brickmaking was an important business in this town. During this period the city of Lowell sprang into existence. The construction of its great factories was constantly going on, and many of them were built of Bedford brick.

Col. William Moore, of this town, took the contract to furnish the Lowell mill builders a quantity of brick each year. Though making many brick himself, still he was glad to have his townspeople aid him in filling his contract by putting their brick with his. In this way the business prospered for twenty-five or thirty years.

The brick were hauled to the Reed's Ferry landing, on the Merrimack, in a two-wheeled cart with a yoke of oxen and a horse, 1,000 to a load, placed on boats and sent down the river to Lowell. It is said that one day's record showed 150,000 brick hauled to and sent down the river, but this was by special effort because of urgent demand. This business not only gave employment to the many workers about the brick yards, but made an excellent market for the wood owned by the near-by farmers, as large quantities were consumed every year in burning the brick kilns.

After the Nashua and Concord railroad was opened, in 1842, the brick business in this town gradually declined, as rich clay beds were located near the railroad at Hooksett and other places. The cost of transportation was much less from these more favored localities, and thus Bedford brick makers were forced out of business by competition.

The last brick kiln burned in town was made by Col. Daniel Parker about 1877. David R. Leach, who had been a leading manufacturer of brick in Bedford, removed to Hooksett and carried on a successful business there. The farms owned by. the late Col. Daniel Parker, George H. Wiggin, Sr., John McAfee, Ephraim C. Hardy, Wilson Blood, and William Moore (now owned by Thomas Burns) had rich deposits of good brick clay, which their owners turned to good account.

History of Bedford, New Hampshire, from 1737, being statistics ...