Elizabeth A. Moore is murdered by Bryant Moore - 1860

“On June 19th, Bryant Moore shot his third wife, Elizabeth A. Moore, through the head, at his house, No. 61 East Merrimack street. In the following December, Moore was brought to trial at East Cambridge, and was convicted of murder in the second degree. He was defended by J. G. Abbott, R. B. Caverly, and Charles Cowley who subsequently obtained a pardon for him from Governor Andrew.”
- A History of Lowell by Charles Cowley (1868) 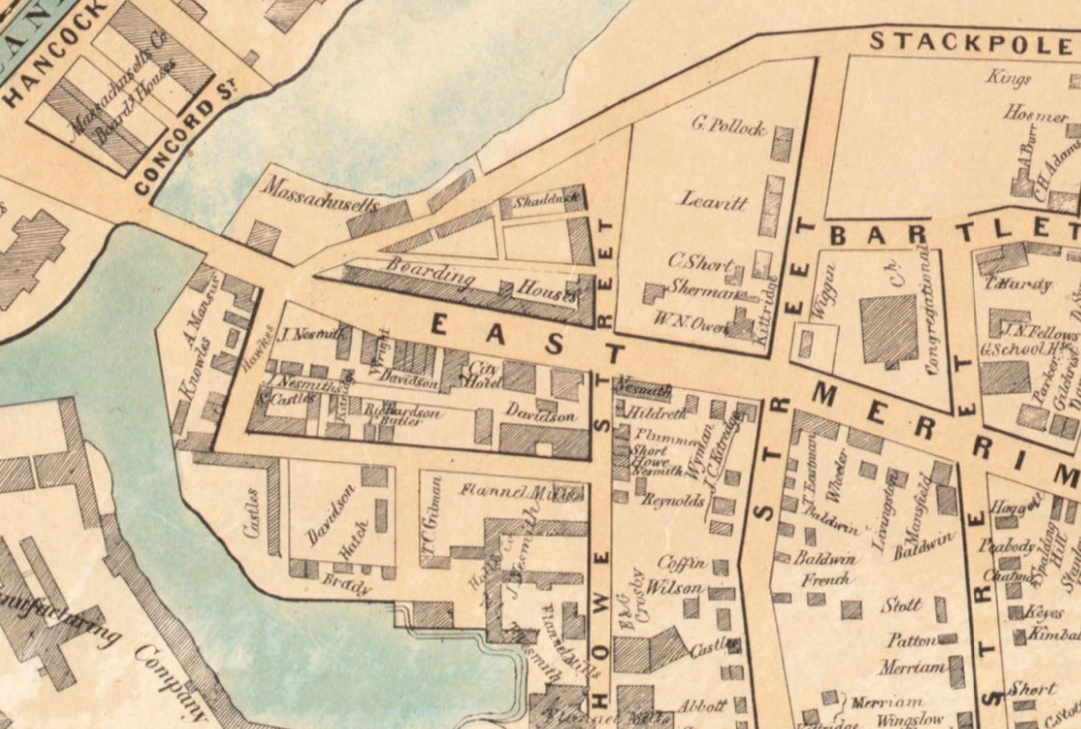 Section of the 1860 Census. Bryant Moore's trade is "Cordwainer."

The Tragedy at Lowell, Massachusetts.;
JEALOUSY, MURDER, AND ATTEMPTED SUICIDE
A HUSBAND KILLS HIS WIFE AND ATTEMPTS HIS OWN LIFE.

The Boston Traveller, of the 20th June, gives full particulars of the murder perpetrated in Lowell, on the 19th, by BRYANT MOORE, a shoemaker. About a year ago MOORE married Mrs. SISSON, widow of a well-known druggist in Lowell, and a lady highly respected in the community. Soon his jealous disposition began to manifest itself by unfounded suspicions of one or two of the boarders, who had rooms in the house, and more particularly of a milkman who supplied the family with milk. This jealousy went so far that in the early part of last May, MOORE, as is supposed, wounded himself with a knife, and then entered a complaint against one PERLEY E. WATSON for stabbing him. This matter was adjusted between the parties without its coming to trial. Mrs. Moore determined to endure these annoyances no longer, and a separation occurred. A fortnight since her husband came to her, begged her forgiveness, and entreated a reconciliation. She finally consented, and he returned to live with her. Soon his jealous conduct was renewed. One night Mrs. MOORE was awakened by her husband's choking her. When he found that she was awake, he remarked that her sleep was broken more easily than he thought it would be. Another time Mrs. MOORE found a dull hatchet behind her husband's trunk. She asked him whether he intended to kill her and her daughter with it. He replied No, that he would use something sharper than that. This conduct determined Mrs. MOORE to again leave her husband. On Tuesday, after dinner, when there was no one in the house but himself and wife, with her little granddaughter and his idiot son, a young man 20 years of age, he came down from the attic to the kitchen, where his wife was busy at work, and asked her to go up stairs and help him pack his things, preparatory to going to Somerville. She complied, and went up with him. After they had been gone some minutes, the little girl heard two sharp reports of a pistol, and in a few moments Mr. MOORE came rushing down, with his head covered with blood, crying that he was murdered. He rushed out on the street, and on going up stairs she found her grandmother lying dead. City Marshall LOVEJOY, who was in the street, was attracted by MOORE's cries and went back with him to the house, when he found Mrs. MOORE in the attic lying dead in a pool of blood. On or near her left hand was a five barrelled revolver, all the barrels of which had been discharged. The pistol was very bloody but there was no blood on Mrs. M's hand. MOORE, who was below, several times stated that his wife had shot him and then killed herself, MOORE himself had three bullet wounds in his head, and persisted in asserting first that another man had shot him and then that his wife had done so. In the attic bloody marks were every where found. An account book was also discovered which contained a number of memorandums which proved that MOORE had long meditated the murder.

In MOORE's pocket was found a singular document, of which the following is a copy:

We agree to die together this night.

Tell Mr. SAMUEL WOOSTER after this to be an honest man, and have a wife of his own.

Both the signatures were evidently in MOORE's handwriting. MOORE was alive at last accounts, and bode fair to recover.

Articles about the murder and trial

All articles are from the Lowell Daily Citizen and News