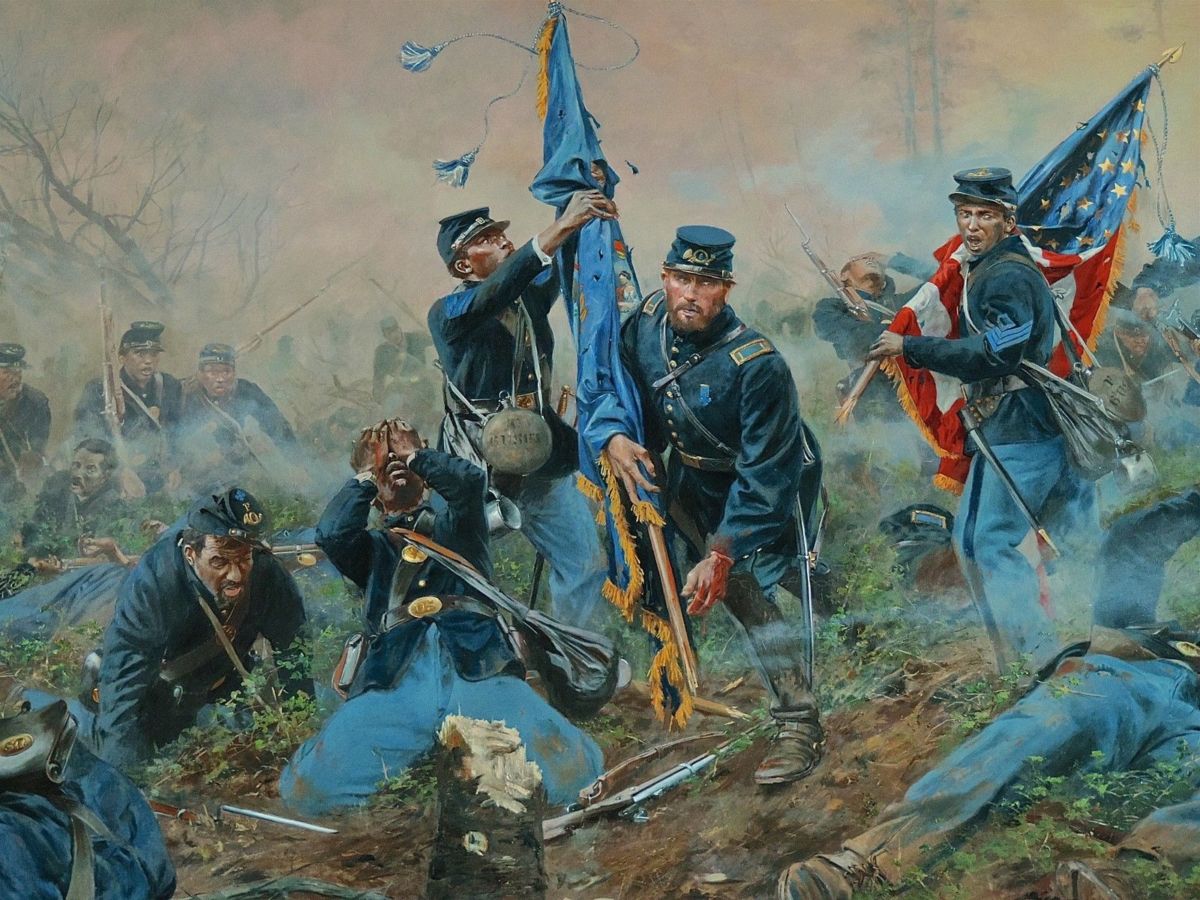 Image #1 “Three Honor of Medal,” by Don Troiani (1949-) from the American Battlefield Trust

Several years into the Civil War, Union Army Major General Benjamin Butler was in command of the Army of the James in its operations against Richmond.  Earlier in the war, he had advocated that Union armies operating in the Confederacy should liberate any slaves they encountered as “contraband of war” and employ them in support of northern forces. President Abraham Lincoln supported this idea and signed two Confiscation Acts into law. He then boosted the decision even further with the Emancipation Proclamation, a component of which included the development of the United States Colored Troops (USCT). By the autumn of 1864, many of these black regiments, with white commissioned officers, had seen combat, and Butler envisioned a large role for the USCT in Richmond’s capture.

In May 1864, the 4th and 6th USCT Regiments under command of Colonel Samuel Duncan launched the first attack against New Market Heights.  The two regiments plunged downward into the swamp and continued north toward the fortified line.

“It was a deadly hailstorm of bullets, sweeping men down as hailstones sweep through the trees,” recalled Sergeant Major Christian Fleetwood of the 4th USCT color guard, who seized the American flag after a bullet cut down its bearer. “We struggled through the two lines of abatis, a few getting through the palisades, but it was sheer madness, and those of us who were able had to get out as best we could.” Confederate accounts afterward boasted that their volleys increased in severity once they learned they were shooting into the ranks of US Colored Troops. One Confederate soldier claimed “the word was passed along the line that they were negroes and to give them lead. Every fellow shot with as much precision as if they were at a shooting match.” The two regiments suffered 387 casualties before falling back across Four Mile Creek.

In 1865, the Colored Troops Medal, later known as the Butler Medal, was established as a military decoration of the United States Army. The medal was commissioned by Major General Benjamin F. Butler and was intended to recognize meritorious or heroic acts of bravery performed by black soldiers at the Battle of Laurel Hill / New Market Heights. Fourteen black soldiers had earned the United States Medal of Honor in that engagement, but Butler wished to further recognize his black troops involved in the battle.  He paid for Colored Troops Medals out of his personal funds. Later that year, in May 1865, the Medal was presented to nearly two hundred black Union soldiers.

The Colored Troops / Butler Medal was a solid silver medal created by Tiffany & Company, suspended from a red, white, and blue ribbon meant to be worn around the neck. Attached to the ribbon was a wreath reading "Army of the James." The front of the medal depicts African American troops moving forward in battle, below an inscription in Latin which reads Ferro iis libertas perveniet, "Freedom Will be Theirs by the Sword.” 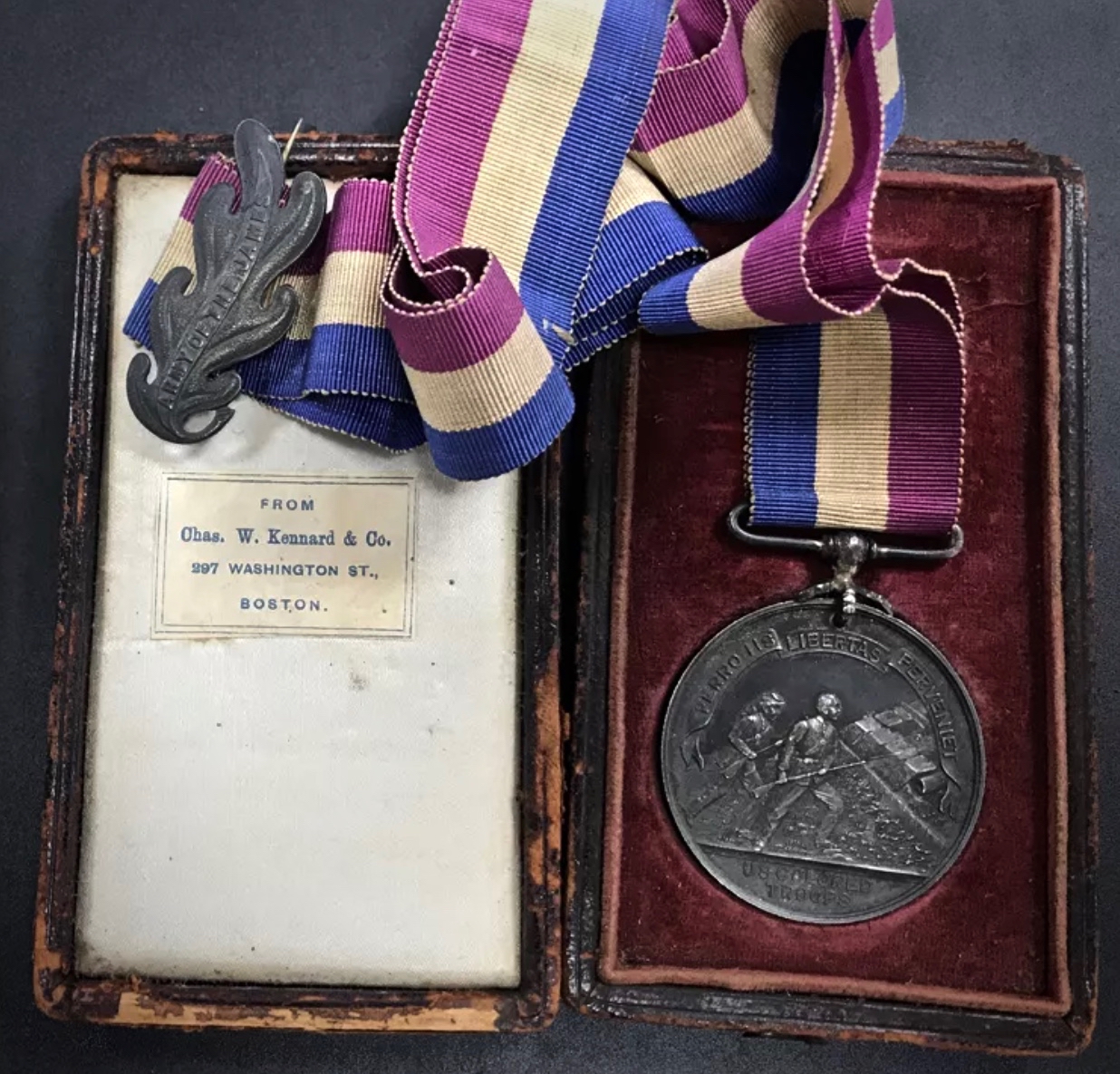 After the war, Butler said the following about the US Colored Troops.

“I had the fullest reports made to me of the acts of individual bravery of colored men on that occasion, and I had done for the negro soldiers, by my own order, what the government has never done for its white soldiers – I had a medal struck of like size, weight, quality, fabrication, and intrinsic value with those which Queen Victoria gave with her own hand to her distinguished private soldiers of the Crimea... These I gave with my own hand, save where the recipient was in a distant hospital wounded, and by the commander of the colored corps after it was removed from my command, and I record with pride that in that single action there were so many deserving that it called for a presentation of nearly two hundred Medals.”
–Benjamin Franklin Butler [from Butler's Book p. 743.]"