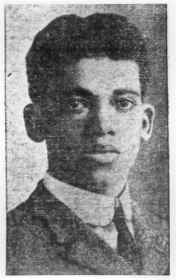 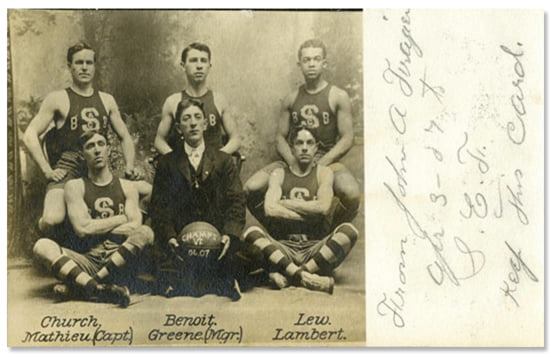 The Lew family had a long history in the struggle for racial equality Massachusetts. His great-great-grandfather, Barzillai Lew was a free black man who purchased the freedom of his future wife, Dinah Bowman, for $400. A gifted musician, he served in the Revolutionary War, as a soldier and fifer at the Battle of Bunker Hill, and later at General Burgoyne’s surrender after the Battle of Saratoga. His great-great-aunt Lucy Lew and her husband Thomas Dalton were civil rights activists in Boston. The home of his grandparents, Adrastus Lew and Elizabeth Freeman was a stop on the Underground Railroad. His father, William Adrastus Lew, was a delegate to the 1891 Equal Rights Convention in Boston.

Known from childhood as “Bucky,” after graduating from gramma school, he went to work at his father’s dry cleaning business. At 14, he joined the Lowell YMCA "young employed boys" basketball team. His team were state champions for the four years he played with them from 1898-1902.  In 1902, he was recruited by Lowell's Pawtucketville Athletic Club "PAC" of the New England Basketball League, and Lew became the first professional black basketball player in the Unites States. Due to the racial climate at the time, the team manager initially didn’t put Lew on the court. Even when injuries hit the team, the manager chose to play four Pawtucketville players against the opposing five-person team. When the PAC team started losing, supporters called for Lew be put into the game. Lew finally played his first game on November 2, 1902.

In an iterview with reporter Gerry Finn, of the Springfield Union, on April 2, 1958, Lew reminisced about that first game:

“I can almost see the faces of those Marlborough players when I got into that game. Our Lowell team had been getting players from New York, New Jersey, Pennsylvania, and some of the local papers put pressure on by demanding that they give this [Black], from around the corner a chance to play. Well, at first the team just ignored the publicity. But a series of injuries forced the manager to take me on for the Marlborough game. I made the sixth player that night and he said all I had to do was sit on the bench for my five bucks pay. There was no such thing as fouling out in those days so he figured he’d be safe all around.

It so happened that one of the Lowell players got himself injured and had to leave the dame. At first the manager refused to put me in. He let them play us five on four but the fans got real mad and almost started a riot, screaming to let me play. That did it, I went in there and you know… all those thigs you read about Jackie Robinson, the abuse, the name-calling, extra effort to put him down… they’re all true. I got the same treatment and even worse. Basketball was a rough game then. I took the bumps, the elbows in the gut, knees here and everything else that went with it. But I gave it right back. It was rough but worth it. Once they knew I could take it, I had it made. Some of those same boys who gave the hardest licks turned out to be among my best friends in the years that followed.”

Of course, we had no backboards in those days and everything had to go in clean. Naturally, there was no rebounding and after a shot there was a brawl to get the ball. There were no out-of-bounds markers. We had a fence around the court with nets hanging from the ceilings. The ball was always in play and you were guarded from the moment you touched it. Hardly had time to breathe, let alone think about what you were going to do with the ball.”

The New England League changed its name to the New England Association and disbanded after the 1905 season. For more than twenty-five years, Lew barnstormed around New England showcasing his talents. On January 4, 1922, the Lowell Sun reported on the Lowell Textile Institute, Basketball Team’s season and their new coach Bucky Lew.

During his years as a barnstormer, Lew encountered racism, according to Gerard O'Connor, whose father Dan was a teammate.  He tells the story of a crowd heckling Lew throughout the first half.

“My father went back out to the court at halftime and... told them he's the most decent guy and we're not going to take it," O'Connor said. "When they came back to play, not a word.”

O'Connor, said Lew's name was part of the vernacular in the city that gave the world Jack Kerouac. Respected and admired, Lew was never singled out because of his race -- at least not in Lowell.

"He was so well-known in Lowell, it just wasn't a big deal," O'Connor said. "In other towns, it was a big deal. And I mean, Lowell was not exactly the birthplace of liberal thinking. But he and his family had been so prominent for so long.”

In 1927, Lew joined the Springfield Athletic Club, Springfield, Massachusetts. Around the same time, he moved his family to Springfield. After 30 years of playing on a basketball team, in 1930, at age of 46, Lew was no longer on the Springfield team. He continued in the dry-cleaning business until he retired in 1955.

“Bucky Lew was a man of courage and perseverance. He didn’t talk about basketball.” His daughter, Phyllis, told a reported, “but sometimes, if things weren’t going well for one of us or if we were having difficult times, he’d talk about how things were for him back then. He used his athletic experiences to teach us what life was about.”

“Funeral Services will be held Friday for Harry (Bucky) Lew, 70, a Negro basketball player credited with breaking the color-barrier in professional basketball more than 60 year ago,