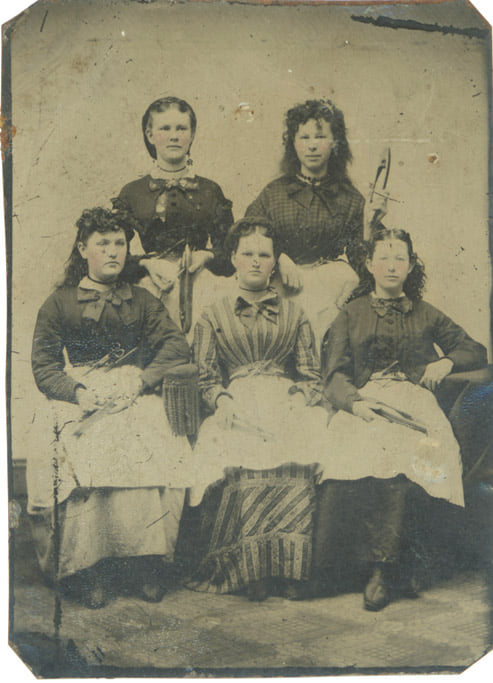 Sarah L. Clay (1801-1878), was born January 19, 1801, in Candia, New Hampshire, daughter of Walter Clay and Sarah Hills. She left the hills of New Hampshire and arrived in Lowell in the early 1830s to work in the Tremont Mills on Suffolk Street.

Sarah Clay was selected Secretary. During 1850s and 1860s, she had a Dressmaker and Tailor Shop in the Nesmith Block on the corner of Merrimack and John streets. In 1851, Clay became a Life Member of the Massachusetts Anti-Slavery Society. As secretary Clay helped organize Anti-Slavery Fairs in Lowell and Boston to raised money to support the Abolition Movement.  She frequently sent announcements, letters, and reports from Lowell to the anti-slavery newspaper The Liberator, in Boston, edited by renown abolitionist William Lloyd Garrison.

“I do not recollect of having seen, even in The Liberator, any particular notice of her as a lecturer, aside from the regular advertisements. She certainly processes a mind of no ordinary culture, and a heart deeply imbued with every high and noble sentiment, seems perfectly familiar with history, especially that relating to human rights, and some of the very best authors of the age are occasionally quoted by her, in most beautiful and illustrative appropriateness. It seemed to me, as I sat and heard her, especially in the evening, that her every sentence must have thrilled each human with an almost envious admiration, and have waked up dormant aspirations which would vibrate through the ages.”

“But it is vain for me to wish her heard in every town in New England, and by much larger audiences than honored her with their presence her, for she informs me that she goes to England in a month. May her journey be prosperous, and her reception most cordial, in that land where she feels that she shall, for the first time in her life, breathe the air of perfect freedom!”

Yours truly, and in much haste, Sarah Clay.

(note: Remond went on to become one of the Abolition Movement’s most effective lecturers.)

Letter from Sarah Clay, written on the occasion of an anti-slavery meeting where Andrew T. Foss spoke.

Dear Sir, - I know you will be glad to learn that the Anti-Slavery meeting here, yesterday, addressed by Andrew T. Foss, was a complete and triumphant success over the riotous element that were evidently among us at the commencement of the afternoon meeting, but were very soon allayed by the kind remonstrance of one of the ladies present, and the calm confidence, undaunted manner and powerful voice of Mr. Foss…

In the evening, some hundreds assembled at an early hour… Four slaves were seated on the platform, and a short appeal was made to the audience, whether any one present would

Yours Most Truly, Sarah Clay

"Sarah Clay has always held a prominent rank among the ladies of Lowell in all reform movements. She was a strong and vigilant worker in the antislavery cause to which she gave her life and money while it was needed and all through her well-spent life gave strong proof of her firm adherence to the principles of rectitude and right, rather than to gain fame or applause."