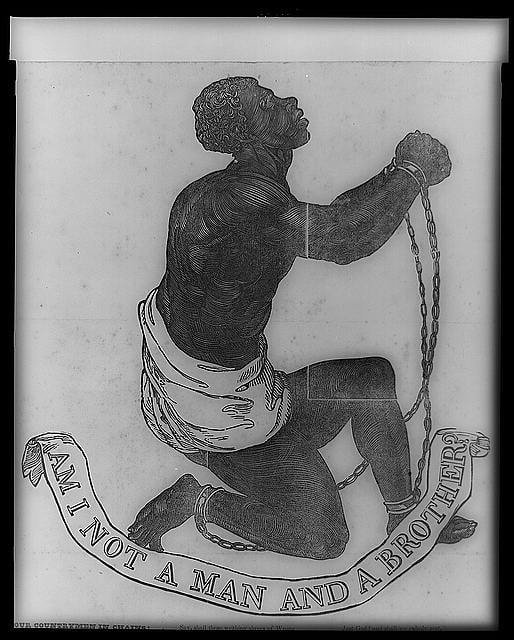 "Am I not a man and a brother?" from a 1837 broadside of John Greenleaf Whittier's antislavery poem, "Our Countrymen in Chains" was based on an earlier design that appeared on the title page of Some historical account of Guinea in 1788. It was adopted as the seal of the Society for the Abolition of Slavery in England in the 1780s and appeared on several medallions for the society made by Josiah Wedgwood.

Quork Walker was an enslaved American who sued for and won his freedom in June 1781, in a case which cited language in the new Massachusetts Constitution (1780) that declared all men to be born free and equal. The case is credited with helping abolish slavery in Massachusetts, although the 1780 constitution was never amended to explicitly prohibit the practice. Massachusetts was the first state of the union to effectively and fully abolish slavery. By the 1790 federal census, no slaves were recorded in the state.

Quock Walker was born in Massachusetts in 1753 to Mingo and Dinah, who were both enslaved.  They were sold and moved to Barre, Massachusetts. His siblings were Cato, Minor, Stephen, Priscilla, Rosanna, Annis, Esther, who eventually became part of the Commonwealth v. Jennison lawsuit.

Quork Walker's sister Minor, also a member in the Commonwealth v. Jennison lawsuit, was born in 1752, Barre, MA and died April 13, 1852, Boston, MA. On December 5, 1792, she married Peter Pitts Peters, Sr. In bout 1820, Minor, Peter, and their eleven children moved from Barre to Cambridge. Several of their children including Walker Lewis, Peter Lewis Jr., and Andress Lewis, moved to the newly incorporated Town of Lowell where they married, raised their families, lived, and worked for many years.