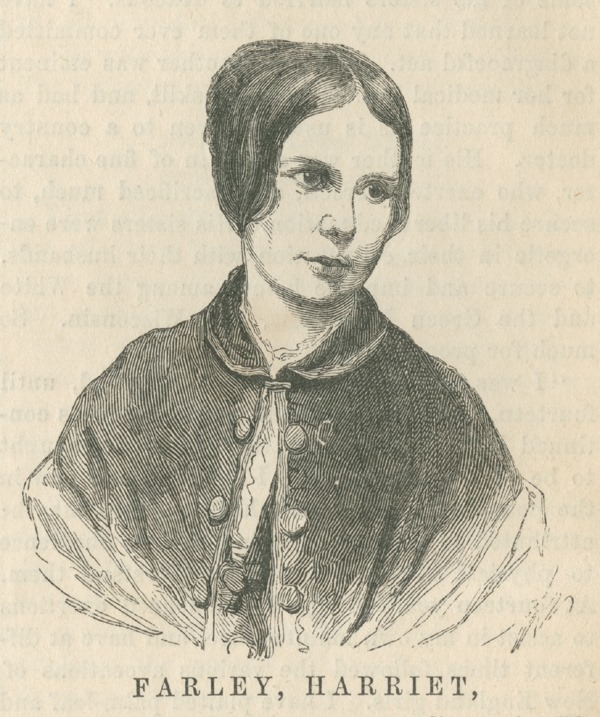 Harriett Farley from Woman's Record, or, Sketches of All Distinguished Women, from "the Beginning" Till A.d. 1850, Arranged in Four Eras with Selections from Female Writers of Every Age. p. 657

Harriet Jane Farley (1812-1907). As a little girl, fair-haired, gray-eyed Harriet roamed the hills and meadows around her small town of Atkinson, NH. Farley was one of ten children of parents Stephen Farley and Lucy Saunders. Rev. Farley was a minister of the Congregational Church and principal of Atkinson Academy, a high school opened to both boys and girls. Harriet grew up surround by books and education. Her father struggled to feed his large family and there were days when all they had to eat were boiled potatoes and milk. At age 14, Farley began contributing to her family’s income by making straw hats, binding shoes, and other cottage industries. When she was a little older Farley taught school for a few years, but didn’t like teaching.

In 1838, at age 25, against her family and friends wishes, Farley left Atkinson and became a textile worker in Lowell, Massachusetts. Working 11 to 13 hours a day, and living in a crowded company boardinghouse, she felt a sense of freedom to “read, think and write…without restraint.” She was soon contributing articles to the newly formed publication The Lowell Offering, a literary magazine that grew out of a church “Improvement Circle” organized by Rev. Thomas Abel.

One of Farley’s first articles, published in 1840, was a reply to labor reformer Orestes Brownson’s attack upon "free labor" in which he said it “was far more oppressed than slave labor…” and that “saying ‘She has worked in a factory’ is almost enough to damn to infamy the most worthy and virtuous girl…” In 1842, Harriet Farley along with her friend Harriot Curtis left the mills to co-edited The Lowell Offering.

During the summer of 1845, Harriet was criticized by her former colleague Sarah G. Bagley for not taking a stronger position on labor reform and for acting as “the mouthpiece for the corporation.” Harriet’s defense was that the Lowell Offering was a literary magazine, created to show that working women were respectable and had dignity, and was not a labor reform publication. Shortly after this debate, the Lowell Offering ceased publication. It was revived in late 1847, as the New England Offering, with Harriet as both editor and publisher. The New England Offering provided a publishing opportunity for working women throughout New England and many of the articles focused on labor reform.  This magazine ended its run in 1850.

Harriet continued to write about issues that concerned her, including a reply to Alabama Senator Jeremiah Clemens’ charge that working conditions were better for southern slaves than for women in Lowell’s textile mills. She also wrote for the Godey’s Lady’s Book, a women’s magazine edited by her friend Sarah J. Hale. In 1853, she published a children’s book, Happy Nights at Hazel Nook. The next year she married John Intaglio Dunlevy, an engraver and inventor in New York City.  She then dedicated her efforts to raising a family. After her husband’s death Harriet published her final book called Fancy’s Frolics in 1880. Harriet died in 1907 at the age of 95.

Harriet Farley was known throughout the world as a writer, an editor, and a spokesperson for working women. She believed that through “moral persuasion,” society would improve the working conditions, rights, and the quality of life for woman and all oppressed or enslaved people.