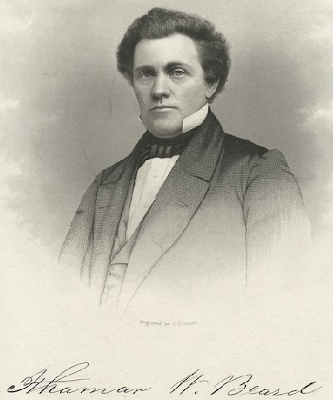 Ithamar Warren Beard (1814-1862) was born in Littleton, Massachusetts, son of Ithamar Eames Beard and Mary Warren. Beard moved to New Hampshire and studied law. In 1836, he married Mary Atkins Todd and they had three children. Mary Todd Beard died in 1853 and the next year Beard married Abba Warren Mansur.

“In 1842, Beard moved to Lowell and engaged with great vigor and stresses in the practice of his profession. For a quarter of a century New Hampshire was the most orthodox school in the country for young Democrats. Beard at an early period breathed its pure air, received the Democratic creed, both with his convictions and his affections. He was an active worker in the ranks while yet a student at law, and from that day to this has been an earnest sincere, and consistent Democrat. (ed note: 1840s and 1850s Known as the party of the "common man," the early Democratic Party stood for individual rights and state sovereignty, but opposed banks and high tariffs.)

In 1848, Beard was nominated for State Senator in Middlesex County and carried the entire strength of his party. The next year he was nominated, and offered the Free Soiler vote, on condition that he would elect assist to elect Charles Summer to the Unites States Senate. This offer was most decidedly rejected; and Beard lost, as he expected, his election.

So strong however, was the zeal for the coalition that Free Soilers voted for Beard in March 1851, and he was elected to the Senate of Massachusetts in spite of all opposition. While in the State Senate, the sectional spirit pervaded the Legislature, yet the record bears witness that every vote of Beard was patriotic and national.

From the Weekly Journal and Courier, Lowell, Massachusetts April 7, 1851

“We understand that that Mr. Booth, the colored barber, and a fugitive, who went to Canada some time since and returned after a brief sojourn there, is in a fair way of receiving his freedom papers. A day or two since, his owner in Virginia wrote to the Hon. Linus Child, that unless Booth's freedom were purchased, he should be compelled to adopt legal measures for his surrender. He stated that he was worth $1,500 to him, but that, under the circumstances, he would take much less. He was finally induce to say he would relinquish his claim for $700. Accordingly, on Saturday, a paper was drawn up by I.W. Beard, Esq., who heading it up with $25, and about fifty were obtained without taking it out of the entry. We hear that it will be taken round today by some one, and we presume the requisite sum will be obtained in the course of a few days. The subscriptions are payable to Mr. Child, and they will not be called for unless the whole shall be raised. An opportunity is here presented for the exercise of a little practical philanthropy on the part of our abolitionists, which of course, they will not allow to pass unimproved.”

In October 1853, Beard was appointed Assistant Treasurer of the United States, at Boston.

Not a whisper of reproach, complaint, or suspicion has ever been utter in regard to the manner in which he had discharged the duties of this responsible office. Every dollar has been found in place ready to be accounted for at any moment.

Beard, in person, is broad, full, well-proportioned, and stands six feet in height.
Indisposition he is open, frank, faithful, and generous.
As a lawyer, he seizes the strong points of his case, and presses them with great clearness and force.

Beard is very successful as a stump speaker. He enters a canvas with earnestness, courage, and determination. He asks no favors and gives no quarter; while candor, clearness, and a manifest honesty of conviction, win their way to the confidence and respect of his audience.

Beard is still young for his position, healthy, with bright and enlarging prospects before him. May his well-founded hopes be fully justified in his future success.”