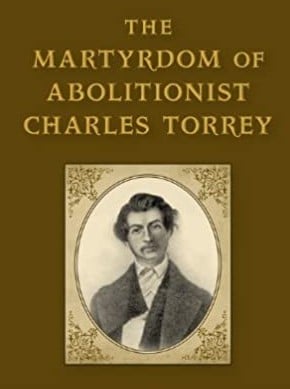 The Martyrdom of Abolitionist Charles Torrey by E. Fuller Torrey (2013)

Charles Turner Torrey (1813-1846)  By the time he was 4 years old, Charles Torrey's mother, father, and baby sister had all died from tuberculosis. He went to live with his maternal grandparents, Charles Turner IV and Hannah Jacobs, in a part of Scituate that is now Norwell. His maternal grandfather, once a member of the U.S. House of Representatives, remained active in local affairs, and introduced his grandson to political issues.

Until recently largely forgotten in history, Charles Turner Torrey was a minister and reporter for many Massachusetts newspapers including those in Lowell. Torrey co-founded the 1840 Liberty Party, whose sole platform was the abolition of slavery. In 1842, he established the first highly organized Underground Railroad route, running from Washington, DC, to Albany, NY and personally assisted nearly 400 slaves to freedom. He was referred to by some at that time as the "father" of the Underground Railroad.

While assisting enslaved people escape to freedom, Torrey was charged in Baltimore, Maryland with three counts of stealing slaves. He initially regarded his arrest as an opportunity to challenge the constitutional legitimacy of slaveholding in general; if it was not legitimate, then freeing people who were enslaved would not be a crime. By September 1844, it was clear that this strategy was not going to work, so he attempted to break out of jail and almost succeeded.

In December, Torrey was tried, convicted, and sentenced to six years in the state penitentiary. Prison conditions caused the return of his tuberculosis. Throughout New England, including Lowell, Massachusetts, people established Torrey Committees to raise money in support of Torrey's legal defense. Clemency requests were made by Linus Child to Governor Francis Thomas of Maryland, which were denied. Torrey died in prison on May 9, 1846.

The Middlesex Standard, a local anti-slavery newspaper edited by John Greenleaf Whittier and Chauncey L. Knapp, followed efforts of the Lowell Torrey Committee to raise money for the defense of Charles Turner Torrey.

After Torrey died in prison, his body was brought back to Boston, where hundreds of people attended his funeral at Tremont Temple. He was buried at Mount Auburn Cemetery in Cambridge, Massachusetts, where a monument with a figure of an enslaved female was erected over his grave. "Torrey's blood crieth out" became an abolitionist battle cry, and the story of his sufferings and death excited eager interest both in the United States and in Europe, giving new impetus to the anti-slavery cause.