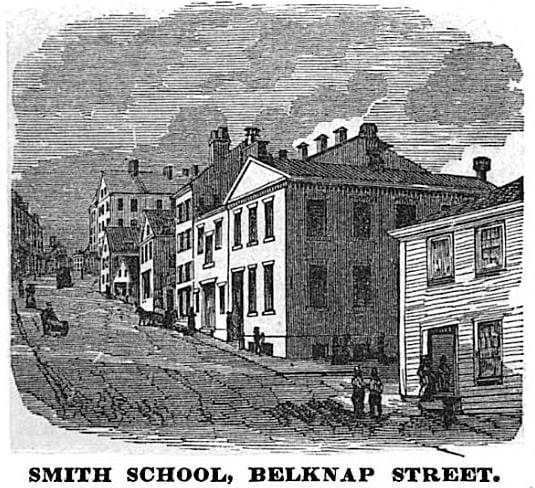 Lucy Lew married Samuel Francis on May 20, 1817 in Boston, Massachusetts. They lived on Butolph Street, a part of the black community on the north slope of Beacon Hill, a hilly neighborhood with winding streets and narrow pedestrian alleyways. This neighborhood was central in the fight for people of color to find decent housing, educate their children, establish independent cultural and social institutions, and abolish slavery in Massachusetts and the rest of the country.

After Lucy’s first husband died, she married Thomas Dalton (1794–1883) on May 13, 1834 in Boston, Massachusetts. The Daltons were leaders in organizing political, cultural, and educational institutions for their community in Boston, including many which advocated for black citizens of Massachusetts and the nation.

The Massachusetts General Colored Association was organized in 1826 by Thomas Dalton, President, William Cooper Nell, Vice President, and James George Barbadoes, Secretary, to combat slavery and racism. One of their most influential members was David Walker, who expressed many of their ideas in his 1829 Appeal in Four Articles to the Colored Citizens of the World.

The Association was an early supporter of abolitionist William Lloyd Garrison. Its influence spread locally and throughout New England. Under Thomas Dalton’s leadership they merged with the New England Anti-Slavery Society, founded by Garrison, in 1833. The Society sponsored dozens of lecturers or "agents" who traveled throughout New England, speaking in local churches and halls, arranging annual anti-slavery conventions, and organizing fundraising fairs.

The Boston Mutual Lyceum was organized in 1833 by Lucy and Thomas Dalton to provide the African-American community with lectures, concerts, and entertainment. The Board included women and had a female vice-president. Two of the five managers were also women.

The Infant School Association was organized in 1834 by Lucy and Thomas Dalton to support the Abiel Smith School, Belknap Street (now Joy Street) for children of color. The Daltons helped organize the Boston citizens of color to elect integration advocates for School Committee members.

Dalton was among those who signed a petition to the School Committee of the city of Boston for improved schools for Boston children of color. He was instrumental in the long fight to integrate the schools. In 1849, the Massachusetts Supreme Judicial Court ruled that segregated schools were allowed under the state's constitution (Roberts v. City of Boston), however integration of Boston's schools was finally achieved thru Massachusetts Legislation in 1855.

In the late 1830s, Lucy and Thomas Dalton moved to Charlestown and settled at the foot of Bunker Hill. They lived there until 1865 when Lucy died and Thomas moved to live with his niece in Boston.