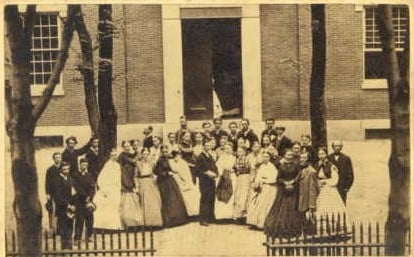 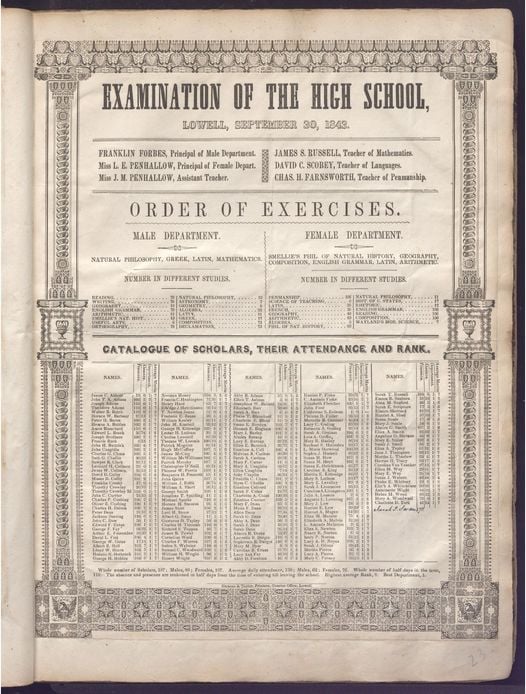 Arriving in 1826, the same year Lowell was incorporated as a town, Henry Van Vronker was the first barber and hairdresser in this growing textile industrial center. He advertised “Fashionable Curls” to Lowell’s large number of Yankee female textile workers. Van Vronker died March 12, 1836. The 1868 Contribution of the Old Residents notes: “the genteel and accomplished barber in the rear of the store of Mansur & Reed on the corner of Central / Green Streets. His widow is now living on Chapel Street, south of Elm, in the same house occupied by herself and her husband in 1826.”

After her husband’s death, Lucinda Van Vronker worked at home and took in laundry. The 1868 Contribution to the Old Residents further notes: Lucinda “did the first washing of clothes by piece ever done for customers in this city.” The Van Vronkers were part of a small community of black citizens in Lowell. Caroline Van Vronker was their oldest daughter with two sisters: Henrietta and Hannah Jane Van Vronker, and one brother: Henry Webster Van Vronker.

The first schools in the area were established by the Town of Chelmsford, when Lowell was incorporated in 1826, the schools came under Lowell’s jurisdiction. So far, the first record found of children of color attending schools in this area, was an account by Varnum Lincoln in the 1868 Contributions of the Old Residents “My father changed his place of residence… This change of location brought me into what was called the Pawtucket Falls District. The school-house stood exactly on the corner of Merrimack and Pawtucket Streets (now University Crossing). My first teacher in this school, whose name I remember, was Mr. Byam from Chelmsford, my impression is that he taught a successful school... I remember two colored boys, who interested my young fancy, perhaps, because of their dark features, whose names were Peter and Hosmer Freeman. Their parents had been slaves and liberated by the emancipation act of Massachusetts.”

A few years after the Van Vronkers arrived, in 1831 Lowell High School was established as a public high school, accepting the highest ranking 50 girls and 50 boys, based on examinations. Initially located on the upper floor of a small wooden building near Thorndike and Dutton Streets. In the early 1830s, the Hamilton Manufacturing Company provided a brick building on Middlesex Street.

Lowell High School moved in 1840 to a new school building located between Kirk Street and Anne Street along the Merrimack Canal. Female students “were separated entirely from the males, entering the house from a different street, occupying a different room and not mingling at all in the same classes.”

In 1843, every public high school in Massachusetts and the United States was segregated. Caroline Van Vronker ranked high on her examination and qualified as the first student of color to enter Lowell High School. At the time, young women were part of the “Female Department,” where they studied subjects ranging from penmanship to natural philosophy. They also learned Latin, French, and United States history.

Responding to the inquiry by the Committee of the Primary School Board, on the Caste Schools in the City of Boston, Lowell’s Mayor Elisha Huntington wrote on April 14, 1846:

“The public schools of Lowell, of every grade – primary, grammar, and high – are open to colored children, on the same conditions as to white children. There is not, nor ever has been, theoretically or practically, any distinction in this respect whatever. The colored child, as the white, attends the school that happens to be located in his neighborhood, and no fault is found or questions asked. He has the same right to present himself for admission to the high school. And if, upon examination, he is found to have the requisite literary qualifications, he is admitted there, on an equal footing with his white brother. I know of only one instance of a colored child in the high school, but no others have applied. It is free to all….This is the course that has been pursued in Lowell from the beginning, and its propriety has never been questions. The most of the children of the rich and the poor in Lowell, attend the public schools, and I have heard of no one’s delicate sensibilities being shocked by the course that has been pursed.”

After Caroline Van Vronker graduated from Lowell High, Joshua Merrill, educator and publisher, wrote that she had applied as a teacher, but there were “objections on account of her color".