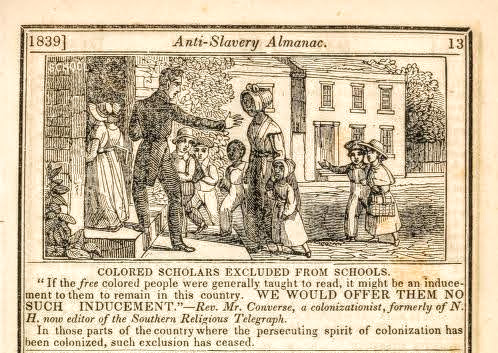 Charlotte Williams (1798- 1885), was the daughter of Isaac William, who had been enslaved and later fought in the American Revolution, and Elizabeth Will, an indigenous Ponkapoag woman.  She married Samuel F. Foster on November 17, 1814 in Stoughton, Massachusetts. They had one son, Horatio W. Foster, born in 1816.

According to the “Annals of the Boston School Committee 1818-1835,” on August 7, 1822, under the charge of Mrs. Charlotte Foster, the first primary school for colored children, ages 4-8, open in the African Meeting House on Belknap Street, in a room next to the grammar school.  Opening with 47 scholars, 19 Girls and 28 Boys, enrollment in the primary school increased so rapidly that the Committee approved the opening of a second primary school. Charlotte taught at the Boston Primary School No. 5, a position she held for over 10 years.

In 1835, the Abiel Smith School (named in honor of a long-term benefactor) was built and opened on Belknap Street, Beacon Hill.

August 23, 1836 Charlotte Williams Foster would have been required to stop teaching when she married Nicholas Myers in Boston. A few years later, the Myers and their son Horatio moved to Lowell, where Nicholas Myers works as a renovator of clothes, or clothes cleaner, until the mid-1850s. At that time, it appears Nicholas Myers died and Charlotte Myers moved back to Boston.  She died in 1885 in Taunton, Massachusetts.

In 1798, sixty members of Boston’s black community organized the African School in order to educate their children. This school first met in the home of Primus Hall. In 1808, funds were raised for the African Meeting House with the agreement the first floor would be used for school rooms. After repeated petitions and requests in 1812, the Boston School Committee finally officially recognized the segregated African School and started providing partial funding, but the condition of this school remained poor, and space was inadequate.

In 1815 white businessman and educational advocate Abiel Smith died and bequeathed $4,000 for the education of black children in Boston. The Boston School Committee used interest from this money to fund the African School.

In the 1840s Benjamin Roberts of Boston began a legal campaign to enroll his five-year-old daughter, Sarah, in a nearby school for white children. The Massachusetts Supreme Judicial Court ultimately ruled that local elected officials had the authority to control local schools and that separate schools did not violate black students’ rights. The decision was cited over and over again in later cases to justify segregation.

Black parents in Boston, however, refused to accept defeat. They organized a school boycott and statewide protests. In 1855, the Massachusetts State legislature passed the country’s first law prohibiting school segregation.

#LowellNHP #LikeLowell #BlackHistoryMonth2021.
Annals of the Boston primary school committee by Joseph Milner Wightman Print Book 2012
1. I. N. Edwards. Marriage as a Legal Cause for Dismissal of Women Teachers. The Elementary School Journal. 1925;25(9):692-695.