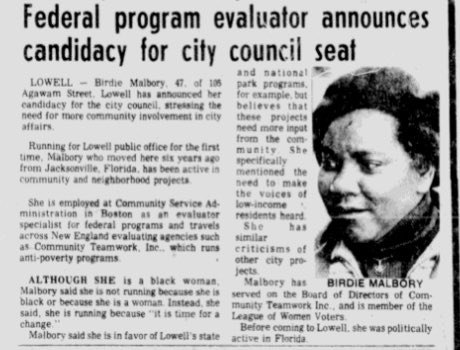 “Birdie Bell Jones (1933-2017) m: John Malbory in 1950, Florida was the first Black woman to enter the race for Lowell City Council. She worked with anti-poverty and social services programs, most notably Community Teamwork, Inc., and advocated for a rent control board. Three days prior to the preliminary election of her first City Council run in 1979, someone threw rocks and set fire to her office in two separate incidents. She ran several more times for office and had her last run in 1989. Her personal motto was: ‘treat all people with equality.’

“Birdie lived in Florida prior to moving to Lowell with her children in the early 1970s. She was a graduate of the prestigious Stanton High School, founded during Reconstruction with the backing of the Freedmen’s Bureau. Malbory then took classes at Bethune-Cookman College (now a university). This school was named in honor of Dr. Mary McLeod Bethune, an important Black civil rights leader. Their motto is ‘Enter to Learn. Depart to serve.’

“Following in the tradition of other social justice leaders, Birdie became an activist and civil servant. While in Lowell, Malbory worked for Community Teamwork, Inc., an anti-poverty and social services agency, as an evaluator. Malbory was a proponent of community-led programs and advocated for a rent control board. She first sought a city council seat in 1979. When asked why she was running, she told reporters: it is time for a change.” Three days prior to the preliminary election (and on the day of) someone, or some people, threw rocks and set fire to her office in two separate incidents. A local NAACP leader, Cleo Jackson, prompted the city to properly investigate. Malbory was not quoted directly in much of the coverage, though she reportedly told journalists ‘the arson-vandalism stems from the fact she is black.’

“Birdie ran several more times for Lowell City Council. She also continued to work in the city and publicly supported the creation of this park. Her last run was in 1989. During that cycle, she shared her personal motto: ‘treat all people with equality.’”

Note: In the mid 1990s, Birdie moved to Atlanta, Georgia and continued her community activism for another 20 years.