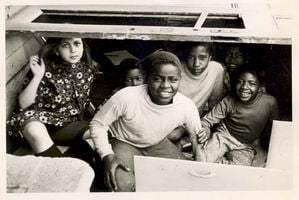 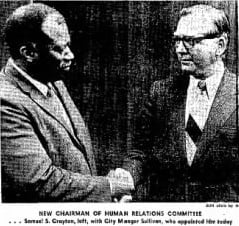 Samuel Stuart Crayton, Sr., (Feb 15, 1916 - Jul 15, 1997), black, born in Omaha, Georgia, son of Noble Crayton and Rachel Hundley. Samuel Crayton moved his family from New Jersey to Lowell in 1940, when his company, A&P Corrugated, based in Lowell offered him a transfer. He and his wife, Elizabeth Adams, lived in Lowell and raised 11 children, 8 girls and 3 boys.

In 1916, a group of Lowell citizens formed a Branch of the NAACP, organized by Harold Wingood, President. After World War I, this Lowell Branch was suspended.

In 1946, another committee was formed including Harold Wingood, Samuel Crayton Sr., James Ward, Rev. Julius Mitchell, Rev. Robert Smith. They applied for and were issued a charter from the national NAACP for the Merrimack Valley Branch of the NAACP. The charter included Lowell, Lawrence, Haverhill, and adjacent towns. It became effective on October 14, 1946, and the first President was Samuel Crayton, Sr.

“Well, most of my life was, you might say, interwoven around the church. And then I organized the Lowell Community Social Club just for blacks. And out of the Lowell Community Social Club I organized the Merrimack Valley Branch of the NAACP. In doing the investigation of the organization, I found that Lowell at one time had a section of the Boston branch in Lowell. Lawrence had their own independent branch, and Haverhill had their own independent branch, but they all had returned their charters because of lack of interest by the people. After carefully considering how to keep this thing going, is to have a branch that covers say from Nashua to Newburyport.

“Lowell – Miss Annette E. Payser of New York, a member of the national staff of the Association for the Advancement of Colored People, will be the speaker at 8 o’clock tonight at Kitson Hall of the YWCA. Before the Merrimack Valley branch of the association in a special Founders’ Week program. Samuel S. Crayton of Lowell, president of the local branch, will be in charge of the program.

‘The local branch of the NAACP was organized early last summer, with nearly 175 members, and includes the territory of Greater Lowell, Andover, Haverhill, Methuen, Amesbury, Lawrence, and Nashua, NH. Its membership is open to all, colored and white alike, who are in harmony with the principles of the organization in bettering social and educational conditions among colored people in America.”

“Lowell – This city will be the center of activities next Saturday and Sunday when the New England regional conference of the National Association for the Advancement of Colored People (NAACP) is held, the Saturday program at the CYO Hall of the Immaculate Conception Parish, Stackpole Street; Sunday’s program, in the morning at the Girls’ Club, Worthen Street; in the afternoon at State Teachers College, Broadway. More than 300 delegates are expected to take part. Discussion of civil rights, public relations-desegregation, education-vocational guidance, housing-relocation, are on the agenda.”

“NAACP – A meeting of the Youth Council of the NAACP of the Merrimack Valley Branch was held at the home of Kenneth Wingood of Lowell, youth advisor, on Friday April 1, 1960. The council set Saturday, April 30, as Merrimack Valley Picket Day. This is in keeping with the directive from the New England Regional Conference of the NAACP Branches which established picket lines at Woodworth, Kresge, and Grant chain stores throughout New England on Saturday. This action is being taken as a sympathy protest to segregated lunch counter policies of these stores in the Southern branches.”

Samuel Crayton, Chairman of Lowell’s Human Relations Commission and member of the NAACP, arranged a meeting in his office with the Lowell Housing Authority and NAACP.

“In another long, and apparently fruitless session, the Lowell Housing Authority (ed: Chairman, Armand Mercier) and the local chapter of the National Association of the Advancement of Colored People (ed: Vice President Eldon Chapman) last night failed to resolve their dispute over the construction of low-income housing in the Hale-Howard urban renewal area.”

In the end, the Lowell Sun reported in June 1972, the Community Development Authority declared the 3.5-acre site inappropriate for residential use and entire site was to be used only for industrial development.

“The City’s Human Relations Commission will hold a meeting Thursday night to discuss equal opportunity at Lowell Technological Institute. The Institute has been under fire from the Federal Departments of Health, Education, and Welfare, and Housing and Urban Development for not meeting civil rights regulations in the hiring and recruiting of persons from minority groups.

“Some $90,000 in HUD funds has been held up from the federal departments until Lowell Tech proved that it was making an effort to increase minority enrollment and employment at the school.

“Human Relations Commission, chairman Samuel Clayton said this morning that the commission wanted to assure that the institute kept the promise it made to the federal investigators.

“LTI never followed thru on the program, however Crayton said, and more recent meetings with LTI administrators has proved “frustrating.”

In 1971, Samuel Crayton was appointed to the Community Teamwork, Inc., Board of Directors, a private, non-profit corporation established in 1965 under the Economic Opportunity Act to serve low-income people in the Greater Lowell community. Samuel S. Crayton, Sr, was among the first in 1994 to receive the Annual Local Heroes Award given by Community Teamwork, Inc. The Merrimack Valley NAACP also presents an Annual Samuel S. Crayton, Sr. Award for Community Service Leadership.