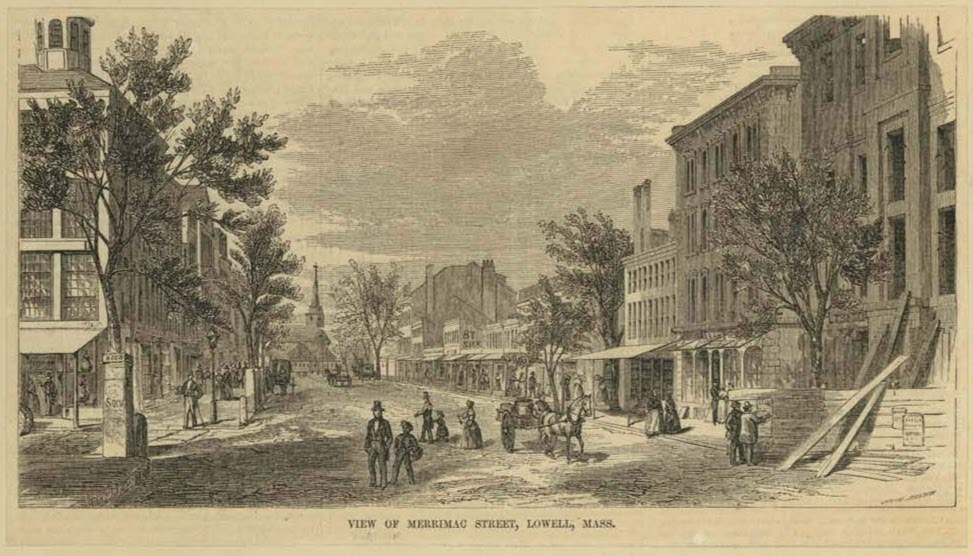 The offices for The Middlesex Standard of Lowell were located in the Nesmith Block, corner of Merrimack and John Streets. The printer was John Gilman Pillsbury (1812-1858). The newspaper was an early voice for the anti-slavery movement and the Liberty Party, initially published and edited by John Greenleaf Whittier (1807-1892). It was later edited by Chauncey Langdon Knapp (1809-1898), who would continue the fight against slavery and for social reform in Lowell.

We shall endeavor to defend the interests of free labor, the rights of the free states, the blessing and privileges of free institutions, from the encroachments and usurpations of the slave power; to show by candid argument and conclusive facts the extent of the injury which slavery inflicts upon our country…

In September 1844, Whittier published a series of letters by John Fountain, a free black man.  The letters were published in an effort to raise money to help free Fountain’s wife, who was enslaved in Virginia. After she was released, John Fountain traveled throughout New England on anti-slavery speaking tours, always thanking Whittier for publishing his story.

“The following letter, we presume, will be read with gratification by those who generously contributed toward the purchase of Mr. Fountain's wife, from a worse than Algerine story:

Permit me, through your paper, to inform the many friends of humanity, particularly those who kindly contributed to aid me in the redemption of my wife from slavery in Virginia, that I have succeeded in my object. She arrived in Philadelphia on the 10th of December; and not withstanding she is much broken by labor and distress the last year, since she began to breathe the air of the free States, she has sensibly revived, and in a short time will, it is thought be perfectly restored.

Dear Sir, words are inadequate to express the gratitude that we feel to the people of Massachusetts, New York, and Pennsylvania, for their assistance in raising the one of God's children from the condition of Chattel to that of a human being. We think that, with the aid of Providence, we can take care of ourselves.

Yours, in behalf of bleeding humanity, John N.H. Fountain"