Lowell History: The Greater Lowell YWCA: One Hundred Years of Service and Advocacy, 1891-1991 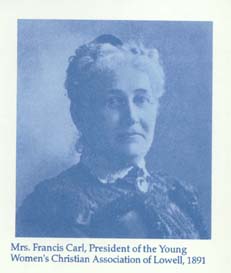 Although a May Shower was in progress, the young ladies of the city interested in forming a Young Women's Christian Association turned out in good numbers at the meeting in St. Paul's vestry, Hurd Street, yesterday afternoon, May 3, 1891,

At an informational meeting on May 3, 1891, Sadie Ayer, Lowell's delegate to the National Convention of the YWCA in Scranton, Pennsylvania, presented her report on the National Association and its aims to a responsive, enthusiastic audience.  This memorable occasion launched the establishment of a local Association, and, in September 1891, the Young Women's Christian Association of Lowell, Massachusetts became a reality.  This Association dedicated itself to the "social, educational and religious needs" of women in Lowell.

Since that time, the Greater Lowell YWCA has expanded its outreach to women, children, and families from all religious, racial, ethnic, and economic backgrounds. The YWCA serves its present day constituency with the same enthusiasm and commitment that was the spirit of the founders one hundred years ago.  Today's YWCA is affiliated with the YWCA of the USA and the World YWCA, and is a member agency of the United Way of Merrimack Valley.

"We never close" is the slogan that might be placed outside the Young Women's Christian Association, for there is no hour of the day or night, weekdays or Sundays, when a woman or girl could notfind entrance to the building .. Travelers stranded late at night, girls turned out of home, strangers from across the water, have been welcomed to theftiendliness of the place. Then, if the Association cannot give all that a girl needs, it sees that she is brought in touch with someone who can.
"Lowell Telegraph," May 25, 1913

From its earliest days in the city, the YWCA addressed the concerns of low-income women, providing residential, educational, health, and recreational programs.  In 1905, the YWCA proudly opened the doors of its new building on John Street. This facility offered secure lodging at nominal fees to women working, studying, or seeking seeking temporary shelter.  It also provided a gymnasium and a spacious dining room open to the public.  In 1976, the YWCA moved to its present location at 206 Rogers Street, formerly Rogers Hall, an historic girls'school.  This "campus facility" includes administrative offices, classrooms, day-care and youth centers, a gymnasium and playground, as well as a residence for women seeking a comfortable, affordable and secure place to live.  From this base, as well as from program sites in the Acre neighborhood of Lowell and in other communities, the YWCA works to provide services and to empower women and children, often in coalition with other organizations. 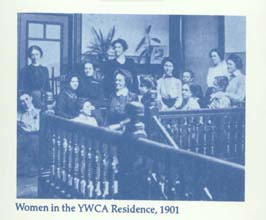 I am a foreign girl, a stranger among you.  I do not know your language or your ways... I, too, contribute to the up building of America.  I work in your factories, shops, and homes, often unknown and misunderstood ... (But in) this great country of America, I have a wonderful friend who seeks to understand me and to know my customs and my traits; who teaches me ... who encourages me to understand such a difficult language; who brings me in contact with other girls just like myself. the YWCA.

"Lowell Telegraph," November 24, 1924
Advocacy continues to be a priority with the YWCA, which seeks to provide women with the means to obtain equity in education, employment and housing. Historically, the YWCA has reached out to welcome and assist women who immigrate to Lowell, encouraging them to contribute to their city and country.  Accordingly, the YWCA has offered courses in language, literacy, and job-readiness skills. At the same time, the YWCA has sought to ensure that newcomers have opportunities to preserve their customs, culture and heritage, even as it introduces them to the cultural diversity of Lowell.  As part of this mission, the International Institute was established in 1918; it later became a separate entity.

"I was scared, but I knew I must take this giant step forward for myself and my family, " said Maria Ortiz, who entered the YWCA's Young Parents' Program last December.

Today, the Greater Lowell YWCA is firmly committed to adult education and career development. Through several distinct activities (the Young Parents Program, the Job-Readiness Training Program, the Displaced Homemakers Program, and the new Careers in Business Program) the YWCA offers General Educational Development (GED) and English-as-a- Second-Language (ESL) classes, career development opportunities, and job training. as well as placement assistance to program graduates.  The YWCA continues its tradition of offering support services for women.  Its Family Support Center provides counseling and parenting training to adolescent mothers. The Parent Aide Program offers social services an advocacy for Hispanic, Cambodian, and other families. In 1986, the YWCA developed a successful Property Management Training Program.  Graduates were often hired by the same companies that provided internships. Meeting the changing demands of the 1990s, the YWCA is initiating a dynamic new program, Careers in Business, designed to teach economically disadvantaged Lowell residents the skills they need to obtain responsible positions in the contemporary world of work. 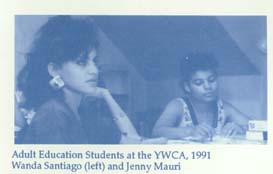 I am really excited about being able to give something back to the kids and camp. I wish the kids as much fun, adventure, and discovery as I had in my many years at Camp Weetamoo.
-Letter from a campership fund donor, and former camper, July 18, 1990

One of the best-known programs of the YWCA is its day camp.  Successor to three earlier camping programs, Camp Weetamoo, located on Long-Sought-for Pond in Westford, was a camp for girls until it became co-educational in 1978.

Although Camp Weetamoo is seasonal, YWCA services to children and teens continue year-round. As part of Fresh Start Youth Services, 35 young people are currently enrolled in the neighborhood-based Green Acre Project on land adjacent to the Western Canal on Suffolk Street. The children plant and tend vegetable gardens. They also celebrate a Wake Up the Earth Day each Spring. They pursue a wide variety of other interests and have submitted award-winning entries to the Lowell Youth Film Festival for the past three years.

The YWCA's City Streets Teen Theatre, created in collaboration with City Stage Company of Boston, invites teenagers to become engaged with all aspects of theatrical production. Members of this repertory company create original plays, act, design costumes, and build scenery. Past productions have included an original play about the issues of adolescence and an interactive drama in which members of the audience participated by assuming the role of immigrants. Milling Around in a Summer's Dream, their most recent production, involved 14 members of this racially diverse company in an adaptation of A Midsummer Night's Dream by Larry Coen of City Stage Company.

CHOICES, a new youth activity for children living in foster homes, provides a wide variety of after-school activities. In 1991, the YWCA also offered summer enrichment workshops to teens enrolled in a federally-funded jobs program, and a training program in horticulture to Acre teens interested in the revitalization of neighborhoods.

The YWCA's Parker Day Care Center is licensed to serve 62 children, from one week to seven years of age.  Many parents of children enrolled in the Center are participants in YWCA educational programs, preparing for G. E. D. certification and employment.  The Parker Center is named in honor of the Theodore Edson Parker Foundation, which contributed to renovation of the space in the YWCA's Flather Building and which has generously supported YWCA youth initiatives over the years. 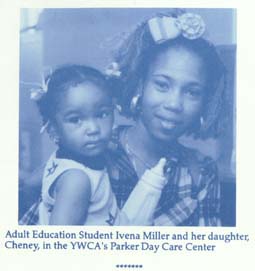 For one hundred years, the Greater Lowell YWCA has been an advocate for women and children.  Governed by a dedicated Board of Directors and served by a talented staff, the YWCA has grown and evolved to meet changing community needs.  It continues to serve by adapting and renewing by developing programs that address contemporary concerns of its members, by instituting programs that sustain and enrich succeeding generations of women and young people, and by empowering members to reach their full potential as individuals, family members, and responsible citizens of the community.

We have a clearly defined vision and long tradition of service and action. Through our membership in the country and around the world, we are a vital force for change and for justice.

Glendora Putnam, National President, at the
National Convention of the YWCA of the
USA, Chicago, Illinois, in June, 1988