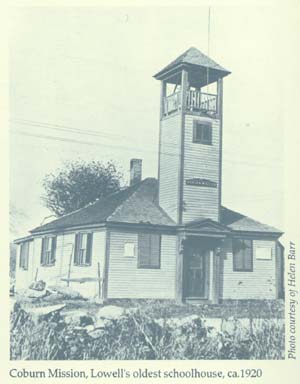 "Lowell's Garden of Eden:"
Pawtucketville has been a Lowell neighborhood since its annexation to the City of Lowell in 1874. Yet the early modern history of this "neighborhood" began in 1668, one hundred and fifty eight years before the birth of Lowell. What is today Pawtucketville was originally known as Drawcott upon Merrimack and the area abounds with physical traces of the past. Situated on the north side of the Merrimack River, around the outside bend of the Great Bunt and spreading in a northwesterly direction from the central city, Pawtucketville has historically been a relatively remote area. A 1959 Lowell Sun article designated Pawtucketville "Lowell's Garden of Eden."

The character and history of Pawtucketville was influenced by two significant features: the Merrimack River as its geographical boundary and Pawtucket Falls, an ancient gathering place for Native Americans.  The Pennacooks called this place where the river exposed ancient bedrock, Pawtucket or "place of loud noise."  In May of 1653, the Massachusetts Bay General Court granted the Pennacook people a tract of land on the north side of the river from Beaver Brook to the present entrance of Pawtucket Boulevard. Portions of the original boundary ditch still exist.

The settlement that developed on the north side of the river was first called Pawtucket Village. The name Pawtucketville can be traced to the construction of the Merrimack-Middlesex Bridge at Pawtucket Falls in 1792, the first bridge that spanned the Merrimack River. On the north side of the bridge, a small village began to develop. This community was originally known as the Village at Pawtucket Falls or Pawtucket Village, and by the time of annexation in 1874, as Pawtucketville.

The early communities of Chelmsford and Dracut were separated by the Merrimack River. This geographical isolation required a great deal of self-sufficiency from those early English settlers on the north side of the river. The significance of the Merrimack as an obstacle to settlement is clearly illustrated by the fact that Chelmsford was incorporated in 1655 and Dracut not until 1701. This is one reason why Pawtucketville can claim so many firsts and oldests: Lowell's oldest schoolhouse, Coburn Schoolhouse, built in 1755; Webb-Durkee House, circa 1656; Varnum Garrison House, 1676; Edward Colburn Garrison House, 1676; Thomas Varnum House, 1745; Lowell's earliest burial ground, Clay Pit Cemetery; Lowell's first minister, Rev. Thomas Parker; and Lowell's earliest established church, Pawtucket Congregational, 1797. During the Colonial period, the only method of crossing the river was by ferry. Old Ferry Road, which once connected to the toll road and north into the interior of New Hampshire, still exists in Pawtucketville.

The Bridge Brings Change
The newly constructed Middlesex-Merrimack Bridge opened to traffic as a toll bridge on November 26,1792.  The Bridge Corporation was headed by prominent Pawtucketville citizens Squire Parker Varnum, Colonel James Varnum and Louis Ansart.  In conjunction with the building of the bridge, the Corporation also constructed Mammoth Road to Concord, New Hampshire, and beyond. The result of the new bridge and road was a dramatic shift in the community. The ferry was discontinued and West Pawtucketville fell into a rural isolation that lasted well into the 1950s.

The Proprietors of Locks and Canal built its massive brick mills and absorbed the ancient community of East Chelmsford. The citizens of Pawtucketville likely considered the establishment of Lowell as an economic opportunity, yet a negative impact was evident. The construction of the Pawtucket Dam in 1822 resulted in the destruction of the ancient spawning cycle of Merrimack River fish which had historically contributed to the residents' way of life.  In 1825, certain individuals actually attempted to tear down the dam.  Upriver flooding was another result of the Pawtucket Dam.  The vast mill pond created by its construction flooded out several of the most productive farms in West Pawtucketville.  As the City of Lowell grew on the south side of the river, the land bordering the north side remained agricultural, except for certain pockets of commercial and community activity, such as Mammoth Road at the Pawtucket Falls Bridge.

On February 20,1861, the final barrier separating the communities of Pawtucketville and Lowell was removed. The Pawtucket Falls Bridge, constructed in 1792, would no longer be a private toll bridge but became a free, public way. Three days of ceremonies by the people of Pawtucketville marked this elimination of tolls and the two communities becoming one.

The Search for Pure Water
Pawtucketville was rich in undeveloped land and unpolluted sources of water and air, resources that the City of Lowell required to maintain growth and quality of life. Historically, the remote Pawtucketville land area had been of little value to residents on the other side of the river, but with the growth of Lowell's population, public health was an increasing concern. As early as 1838, the city surveyed Tyng's and Long Ponds for a pure, dependable water source located in the northern highland above Pawtucketville.  By 1855, however, the pond concept was deemed impractical and inadequate. The water supply would come from the Merrimack River, taken at an inlet station above Pawtucket Falls on the Pawtucketville shore.  Legislation was passed stating that Lowell could take any water and make use of any land in Pawtucketville in order to supply the city with healthy water.

In an address of 1871, in which he urged the construction of a new iron bridge at Pawtucket Falls, Mayor Edward Sherman also said:

A petition will be presented to the Legislature asking for the annexation of a portion of Dracut to Lowell, the area to include the entire line of the Water Works ... the romantic and attractive locality will demand a large share of our attention.

In 1870, a system to purify the water of the Merrimack River by means of natural filtration was implemented.  The filter gallery was located in Pawtucketville above the Dam.  Water quality became an issue again in 1889.  The City of Lowell decided that the solution to its need for water would be driven wells dug on ancient farmlands that had once belonged to the Varnum and Coburn families.  By 1895, there were hundreds of driven wells in West Pawtucketville.  These wells, along with some on River Meadow Brook supplied all of Lowell's water by February of 1897.  The wells of Pawtucketville numbered 479 by 1918.

In conjunction with the new wells, an initiative was launched to establish a driving park or riverfront boulevard in West Pawtucketville. According to a Lowell Evening Citizen article of May, 1889:

Citizens will present the city forty acres of land ... what a magnificent stretch of land will be opened up ... the country in all its freshness and beauty… It made accessible to homeseekers a region of farms extending from Varnum Avenue to the river.

Two Communities Become One
The closeness of the two areas was noted in a Lowell Courier-Citizen article published at the time of Pawtucketville's annexation to the City of Lowell in 1874:

Their relations to our people have been so intimate and constant that the transition will scarcely need to be celebrated in any ceremonious way...

Once annexation had been finalized, changes proceeded rapidly. Pawtucketville had only two schoolhouses. The Varnum Avenue Schoolhouse, built in 1755, was the last school in Lowell where students ranging from 5 to 16 years were all taught in one room. The Mammoth Road School was also small and inadequate, and grammar school students had to walk across the bridge to Bartlett School. In 1883, Pawtucketville citizens went to City Council and petitioned for a new grammar school. The result was Pawtucket Schoolhouse on Mammoth Road.  Soon afterwards, the new Moody Street Schoolhouse was constructed but students were eventually moved back into Pawtucket School and the building was sold. In 1897, the Lexington Avenue School opened as the new primary school replacement for the Old Varnum Avenue Schoolhouse following a proud 142 year history. This would later be known as the Coburn Mission.

As Pawtucketville became more accessible, new residential development increased. The land area east of Mammoth Road blossomed as a neighborhood populated primarily by Irish and French-Canadian families.  With the increase of population, more municipal services became necessary. The 1880s saw the extension of the electric trolley line into Pawtucketville and the Mammoth Road Firehouse was constructed in 1891.

In 1895, the new Moody Street Bridge was constructed, opening a large suburban tract of land in East Pawtucketville that resulted in an increase in property values from Beaver Brook to the Tyngsboro line.  Construction of the Lowell Textile Institute began in 1900 and its placement on the high cliffs over the Pawtucket rapids greatly contributed to the development of this newly opened area. The city took the old Varnum cow pasture in West Pawtucketville by eminent domain in order to construct an isolation hospital for those afflicted with contagious diseases. The 1913 Board of Health Report stated:

beyond doubt public safety requires certain sick should be shut off from free communication with the outside world ... carried out at a special hospital.

In 1917, the old iron bridge at Pawtucket Falls was removed and a new concrete bridge constructed. This was the fourth bridge at this site. In conjunction with this improvement initiative, all residential and commercial structures on the river bank around the bridge were demolished and the land was designated a public park. In later years, the old river road was widened with the coming of the VFW Highway and thus, Pawtucketville became completely accessible. Due to increasing land taxes and residential sub-division development, the last farms of West Pawtucketville disappeared in the 1950s. Yet this legacy of isolation, self-sufficiency, and open space persists in the character of modern Pawtucketville. Many contemporary residents still think of their neighborhood as a separate town and to most people of Pawtucketville, this is generally considered a compliment.