Changing Times: A Century and a Half of Lowell High School

Changing Times: A Century & a Half at Lowell High School by Jill Parker

"...people who graduated from Lowell High are uniquely qualified to change the city. "

Lowell High, the first co-ed public high school in the United States, opened in 1831 with 47 pupils.  Its first home was a small building at Eliot and Middlesex Streets owned by the Hamilton Corporation.  After moving into its Kirk Street location in 1840, the school expanded several times throughout the 19th and 20th centuries. In the mid-1970's, a bridge was built across the Merrimack Canal connecting the Kirk Street buildings with new classrooms and updated facilities on the other side.

One hundred and fifty years ago this fall, the first Lowell High School graduating class began its senior year.  The class of 1841 produced a Massachusetts Governor and a Civil War General.  Since then, Lowell High has turned out a number of notable personalities, among them memorable faculty, sports legends, and literary and entertainment stars.  But while many Lowell High graduates have been recognized at local, state, and national levels, most are ordinary people who have been helped by their high school experience to live together in a rapidly changing society. 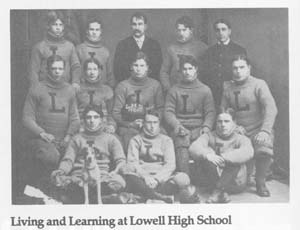 High school athletic contests have long been attended by the Lowell community.  The Lowell-Lawrence Thanksgiving Day football game has drawn as many as ten thousand spectators.  To this day, many Lowellians cannot sit down to Thanksgiving dinner until the big game is over.

Male sports teams have been a major part of the Lowell High story since the 1800's.  Nineteenth century school newspapers carried vivid accounts of schoolboy victories and defeats on the football field, baseball diamond, and the track oval.