History of Lowell: Twenty Years of the Human Services Corporation

Roots and Dreams: Twenty Years of the Human Services Corporation

When asked to name the most significant achievement of the Human Services Corporation, president Peter S. Stamas says, "I suppose the achievement that is most spectacular and the one most talked about is the role that we played in keeping the idea of the Urban National Park alive once it had been conceived, and being the catalyst that brought it through to fruition."

October, 1991, marks the twentieth anniversary of the founding of the Human Services Corporation (HSC) of Lowell.  In the past two decades, HSC has done exemplary work in the areas of urban planning, education, children's services, and respite care.  The city's network of magnet schools, the state and national parks, and the community's holistic definition of culture can be traced to HSC.

The Human Services Corporation was organized in 1971, having grown out of Lowell's Model Cities Program and its citizen participation group, the Acre Model Neighborhood Organization (AMNO).  The seven original incorporators were Rev. Bernard A. Belley, Joseph T. Dillon, Angelike Georgalos, John E Kirwin, Lillian L. Lamoureux, Patrick J. Mogan, and Peter S. Stamas.  Their intent was to continue the work begun by the Model Cities Education Component and AMNO, and to go beyond.  Since that time, more than 100 persons have served as directors of the organization. 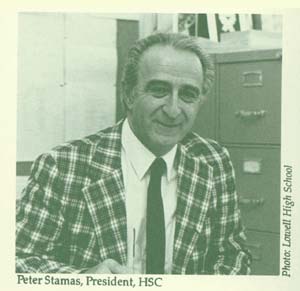 Lowell's extraordinary revival over the past twenty years has been reported worldwide.  The fundamental change is that the city has been recast as a historical park whose physical and cultural resources are being preserved as a national treasure. It is important to remember that this change for the better is the result of the imagination, passion, and persistence of Lowell people.  Working in the schools, downtown, and in the neighborhoods beginning in the 1960's, people who believed that new life could be breathed into the city shaped a plan for a radically different kind of "park" based on Lowell's heritage and way of life.  Early on, this idea was called the "Urban National Cultural Park."
The Park was only one piece of HSC's overall plan to create a model system for delivering every type of service: health, education, housing, recreation, and more. The genius of the plan is that the services are integrated and provided by a multi-purpose organization. This was the concept for a Center for Human Development, which reflects the global thinking of Patrick J. Mogan and the others.  The Human Services Corporation was to be a "neutral ground" where various institutions and organizations could work together to further individual and community development.  In effect, HSC became the Center for Human Development.
Both the Park and Center emerged from the grassroots planning process of Lowellians working through the Model Cities Program, a federal urban development program begun in 1966.  In her analysis of Lowell's revitalization, scholar Loretta Ryan writes that "Model Cities was often seen as an improvement upon the demolition-oriented, neighborhood-destroying urban renewal program in its attention to social concerns."
Looking for ways to revive the downtown and neighborhoods, residents working through the Model Cities Program had established the following goals:

• Use of the city as a learning laboratory;

• Improvement of the environment so as to
reinforce its unique historical aspects;

• Increased respect for the cultural heritage
of Lowell's people;

• Preservation and enhancement of historic
resources as a strategy for economic
revitalization.  (Source: Report of the
Lowell Historic Canal District
Commission, 1977)

The Human Services Corporation, in collaboration with city planners, consultants, business leaders, elected representatives, public officials, and community groups, turned these goals into a platform on which to rebuild the city.  Funding from the New England Regional Commission and Community Development Block Grant Program from 1972 through 1979 enabled HSC to provide planning services to support the development of the Park. 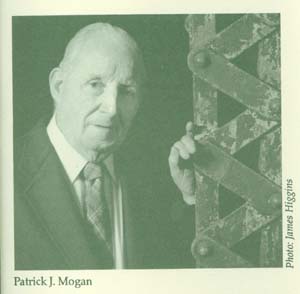 Through the years, HSC effectively used community conferences as a device to encourage dialogue and direct action towards the desired goal. "Charting the Course" (1974), "Keeping on Course" (1976), "Pathways to Human Development" (1979), and "Culture: A Celebration of Lowell" (1986) were pivotal events in the renewal process.  The conferences provided opportunities to assess community needs and gauge the response to proposed developments.
The idea of an urban park evolved from Patrick J. Mogan's vision of "the educative city," a concept for lifelong learning utilizing the local environment as a 'laboratory and alternative classroom. Mogan believed ,that an institution other than the conventional school was required to address the need for personal and community development.  Economic, cultural, and educational renewal were inseparable.
The city-scale park was seen as a living exhibit of the I process and consequences of the American Industrial Revolution.  In this "exhibit" the 19th century mills, canals, and other physical structures were regarded as stage props around which the story of Lowell's multi-ethnic heritage would be told. The first issue of the Urban National Cultural Park Newsletter posed the question, "What is the Park?" The answer: "The Park will be... the rebirth of the city of Lowell ...."
From the beginning, HSC was committed to building "concrete economic and social programs" that would instill a sense of hope and determination in area residents.  In the mid-1970's, Lowell had the state's highest unemployment rate; the city's economy had been depressed for decades.  The Park was seen as a way to create jobs and broaden the tax base.  Two decades later; the economic and social pay-offs of the Park are indisputable.  The overwhelming success of the Lowell Folk Festival is a prime example of the economic and cultural impact of the Park 185,000 people visited the city for a three-day celebration of the diversity and energy of our traditional culture.  The restored downtown historic district served as the open air stage.

Although its work on the Park has received the most attention, HSC has an impressive record in areas seen as more traditional human services. Beginning in the mid-1970's, Massachusetts saw a rapid growth in the "purchase of services" system, through which state agencies contracted with community organizations to deliver services.  Because of its commitment to providing such services in an integrated system, HSC began working closely with the Departments of Public Health Mental Health, and Education, and Office for Children.

In 1976, HSC established the first residential Respite Care facility to support families with retarded persons living at home.  Another program, the Parent-Child Development Center, was a model combination of various services for youngsters.  Today, HSC offers respite care services at Westford House on Nesmith Street through its Family Support Program.  In the past year, service increased almost 25% at Westford House.

On HSC's tenth anniversary, Lillian L. Lamoureux wrote; "There is still much to be done.  There are programs to be advocated, services to be sponsored, caveats to be spoken, developments to be monitored, admonitions as well as praises to be given."  After twenty years, one might hear the same statement from HSC, which is unswerving in its commitment to improving the quality of life for local people.

As HSC enters its third decade, there is talk of unfinished business. According to executive director Ron Platt, "We need to look at the accomplishments of the past twenty years to set the direction for the future, especially concerning issues affecting families and children." The activities surrounding the twentieth anniversary celebration offer an opportunity to assess where HSC has been and discuss where it is headed.  Many topics are on the table -- issues such as community development, the quality of life of families, and fully realizing the Park concept.

Despite the encouraging developments of the 1980's, Lowellians are again suffering economic hardships. The stability everyone hoped for has been difficult to attain in the wake of national and regional economic downturns.  And yet the city is in a stronger position in the early 1990's than it was entering the 1970's.  Historic Preservation magazine recently described Lowell as "the premier rehabilitation model for gritty cities worldwide."  The industrial architecture and ethnic heritage once viewed as liabilities have been successfully transformed into Lowell's most valued assets.  Outsiders and insiders have a more positive view of the city.  Working with leaders from the public and private sectors, the Human Services Corporation helped take a good idea down the road to reality. 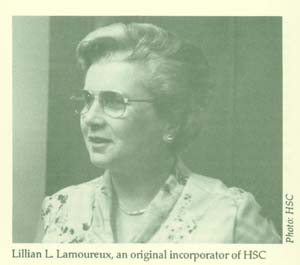 In twenty years, HSC has teamed up with a host of organizations and agencies ranging from the Ford Foundation and National Endowment for the Arts, to the Massachusetts Bicentennial Commission, VISTA, Solomon Mental Health Center, and Lesley College.  The many projects included a Summer Reading Program for the Neighborhood Youth Corps; Specialized Home Care for retarded adults; Lowell Alternative School; The Franco-Ametican Cultural Center; and Lowell City Fair.  The wide array of programs represents more than $4 million in funds raised from federal, state, and private sources.

Members of the Human Services Corporation see themselves as part of long and continuous process of renewal and progress.  They nurture values and cultivate resources.  "We're urban gardeners and tinkerers," says long-time member Mary Bacigalupo.  "You can make a difference by changing how people feel about themselves.  But your work is never done."

Roots and Dreams: Twenty Years of the Human Services Corporation is a creative profile of a community organization that helped change the course of history in Lowell.  With fresh ideas, enthusiastic leadership, and persistent advocacy, HSC played a key role in the city's revival.  As a result of intensive and lengthy planning efforts, Lowell's vocabulary and conceptual language changed.  Ideas like "urban laboratory," and "educative city" provided the conceptual foundation for Lowell Heritage State Park and Lowell National Historical Park.  Much of HSC's product is process: research, planning, meeting, discussion, promotion.  The other work is service: providing assistance to people in need.

This exhibit explores the philosophy of the Human Services Corporation, and examines the impact made by HSC over the past twenty years.  A glossary of terms associated with HSC sets the conceptual stage.  Various programs and projects are featured in display cases as examples of HSC's work in the city.  A storefront office installation represents the continuing process of personal and community development.  Stepping into what might be HSC's current home, the visitor will learn about the organization's accomplishments and see connections between early development plans and the reality of Lowell today Finally, a brief video program presents a case study of successful community action, specifically, HSC's role in the revival of Lowell through the establishment of an urban park as a way to address the need for economic, educational, and cultural renewal.