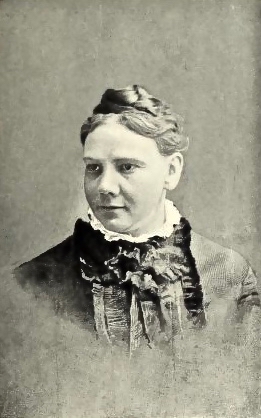 Mary Frances Eastman (1833-1908) was born in Lowell, Massachusetts, daughter of Gardner Kimball Eastman and Mary Flanders. She graduated from Lowell High School (about 1850) and then entered State Normal School, West Newton, Massachusetts (now Framingham).
After graduation from Normal School, Eastman’s first job was Principal, Brookfield High School. In 1855, a few years after Horace Mann became President of Antioch College, Ohio (the first college open to both women and men with male and female faculty members), he requested Eastman join the college first as an advanced student and then as a faculty member to teach preparatory classes until 1859.
Eastman was then offered a position in Argentina. She felt it was too far from her home and family, so she returned to Lowell as Head, Female Department, Lowell High School from 1860-1864. Eastman then moved to Pennsylvania as Head, Meadville (for young ladies) Seminary from 1864-1871. Returning to the Greater Lowell Area, she lived with her parents and sister in Tewksbury, Massachusetts. Until her death in 1908, she dedicated herself to advocating for women’s suffrage, equal rights, and educational opportunities.

From: Representative Women of New England, 1904
“In Pennsylvania, one evening at a reception at the Unitarian Divinity School a group fell into a conversation which led to some consideration of woman suffrage. After the party was over, the students met, and voted to invite Miss Eastman to give her views on the subject more fully in their chapel, and appointed a committee to extend the invitation. A fine audience gathered, and this was her first public address. On returning to Massachusetts, she was invited by Mrs. Lucy Stone to deliver the address in New England. This inaugurated a work of many years throughout the country and its adjacent provinces that was prosecuted from the platform and occasionally from the pulpit. This work proved of the deepest interest to Miss Eastman, and, judging from the unanimous tone of audiences and press, her listeners found it no less so.”
Mary Frances Eastman died in Tewksbury, Massachusetts on November 1, 1908.
Related Resources: