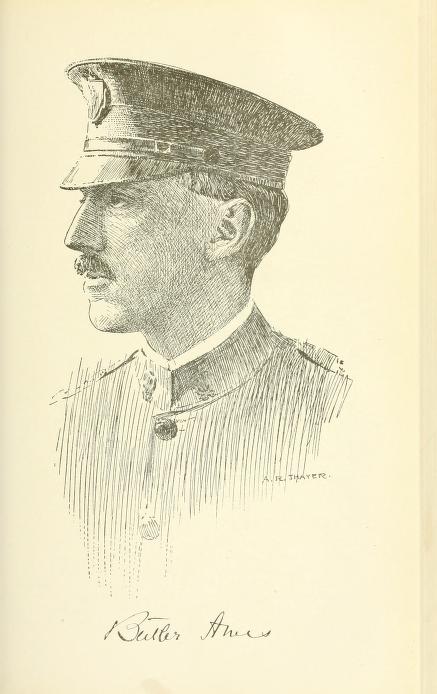 Butler Ames by A. R. Lewis

History of Lowell and Its People

ABSTRACT: Butler Ames (1871 - 1954) born Lowell, MA, son of General Adelbert Ames and the grandson of General Benjamin Butler. He was a politician, soldier, engineer, inventor, and businessman. He held the office of Alderman of the City of Lowell, was a representative in the Massachusetts State Legislature, and congressman in the U. S. House of Representatives. Ames served in the military during the Spanish-American War and World War I as Major General of the Massachusetts State Guard. He was president of the United States Cartridge Company, Treasurer of the Heinze Electric Company and the Wamesit Power Company, and Vice President of the Ames Textile Corporation. Butler Ames was born on August 21, 1871, in Lowell, MA. He was the son of the Civil War General Adelbert Ames and Blanche Butler Ames, and the grandson of Civil War General Benjamin F. Butler and Sarah Hildreth Butler. He was educated in the Lowell schools and later attended Phillips Exeter Academy. In 1889, he was appointed to the U. S. Military Academy at West Point, graduating in 1893. He then attended the Massachusetts Institute of Technology receiving his Master’s degree in mechanical and electrical engineering in 1896.

In 1914, he married Fifille Willis (1886 - 1940) of Columbia, Missouri. They spent part of every year in Italy at Villa Balbianello on Lake Como in Italy, which they purchased in 1919. The property would remained in the family until 1974.

In his political career, Ames was an alderman of the City of Lowell, a member of the U. S. House of Representatives for the Republican Party, representing the Fifth Congressional District of Massachusetts for five terms (1903 - 1913) when he chose not to run for re-election.

As a soldier, he served in the Spanish-American war in 1898, where he was Adjutant and First Lieutenant with the Sixth Massachusetts U. S. Volunteers. He was promoted to Lieutenant Colonel in the field at Puerto Rico. During World War I, Ames was appointed by Governor Calvin Coolidge as Major General of the Massachusetts State Guard.

He served as president of the United States Cartridge Company and treasurer of the Heinze Electric Company of Lowell, where he invented numerous mechanical and electrical devices. Ames was also an advocate of both the automobile and the airplane. He established the Lowell Airport Corporation, launching the short lived Lowell Airport with "New England's Greatest Air-Meet and Exposition" in 1928.

Ames' inventions included the Ames Electric Stove and the Odorless Cooker. In the 1940's he focused great attention on the development and field testing of his "Silver Slippers" shoe inserts for symptomatic relief of arthritis pain.

Butler Ames died on November 6, 1954 at his home on North Street in Tewksbury, which was known as “The Hill.” At the time of his death, he was treasurer and director of the Wamesit Power Company, vice president and director of the Ames Textile Corporation, and a director of the Union Land and Grazing Company of Colorado. He is buried in the Hildreth Cemetery in Lowell.

The collection contains correspondence regarding Ames's professional, military, and political career, as well as his personal writings and materials regarding the beneficiaries of his estate. Also included are political campaign materials, photographs representing his wide range of interests and activities, a collection of maps and architectural drawings, professional as well as family photographs, booklets, postcards, a 1894 West Point photo album, airport and aircraft plans. The collection also includes some artifacts such as his Silver Slipper shoe inserts, an etching plate of his military portrait, and articles of clothing.

Following Ames' death in 1954 the collection was retained by the Oliver and Blanche Ames family at their Borderland estate in North Easton / Sharon MA. Upon Blanche Ames's death in 1969 it fell under the custody of the Massachusetts Department of Conservation and Recreation as Borderland became a state park in 1971. The greater portion of the collection was released to UMass Lowell Special Collections in 2013, with oversized items being transferred in 2019.