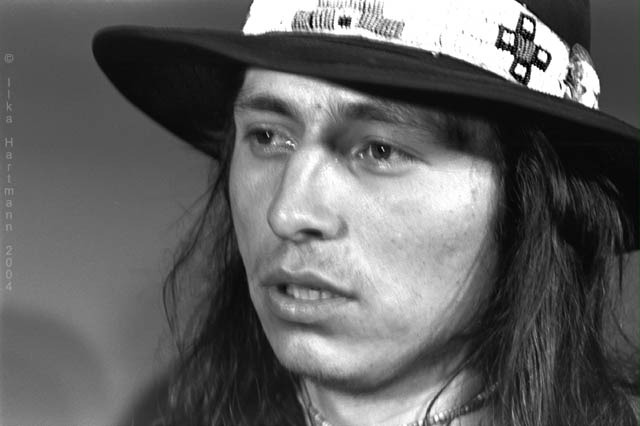 John Trudell speaking at the Senator Hotel after the removal of the Indians from Alcatraz. San Francisco, June 11,1971. Photograph by Ilka Hartmann.

After the occupation, Trudell became involved with the American Indian Movement, serving as its chairman from 1973 to 1979. In 1979, Trudell's wife and three children died in a suspicious house fire while Trudell was protesting in Washington, D.C. Following the tragedy, Trudell focused on his art; publishing books of poetry as well as releasing several albums of music.

John Trudell died of cancer in December of 2015.

John Trudell (1946-2015) was an outspoken advocate for Native American rights and the official spokesperson for the Occupation of Alcatraz and the United Indians of All Tribes as well as a professional author, poet, actor, and musician.

As the spokesperson for the United Indians of All Tribes, Trudell hosted the radio station Radio Free Alcatraz from a broadcasting station on the island. Content for the station included traditional Native American music, interviews with occupiers and other figures of the movement, and political commentary on the state of Native American affairs and America at large.