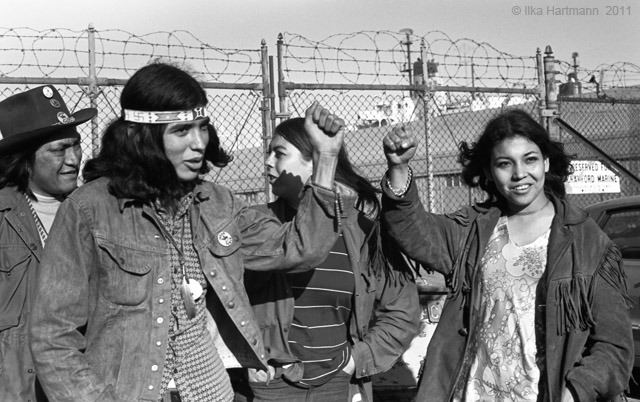 Indian occupiers moments after the removal from Alcatraz Island on June 11, 1971. They are (from left): Harold Patty, a Paiute from Nevada; Oohosis, a Cree from Canada;  Peggy Lee Ellenwood, a Sioux from Wolf Point, Montana; Sandy Berger, from Fort Hall, Idaho. Photo by Ilka Hartmann

The Red Power Movement is the name given to the Native American civil rights movement that emerged in the latter half of the 20th Century. Differing from the other civil rights movements of the century, which sought assimilation into white culture, the Red Power Movement instead sought protection and autonomy in the face of an encroaching white culture that sought the termination of tribal statuses and culture.

The Occupation of Alcatraz serves as one of the most visible icons of the Red Power Movement, but dozens of other protests, events, and standoffs with government forces occurred throughout the movement. Other notable examples of key events are the Wounded Knee Standoff in which Oglala Lakota and the American Indian Movement occupied the town of Wounded Knee in a standoff with government agents that lasted for 71 days.

The Red Power Movement was successful in creating a movement among Native Americans that often transcended tribal boundaries in order to stand up to the United States Government. All in all, the Red Power Movement is credited with ending the federal policy of termination, which sought to strip tribal members of their rights, their identities, and their ancestral lands by revoking the recognition of tribal citizenship.

The sentiments channeled by the Red Power Movement exist in America to this day and a number of activist groups have emerged in its wake.