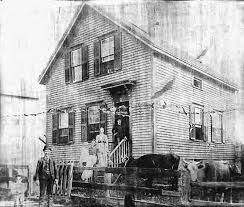 This is an annotated table of contents for The New England Offering prepared by Judith Ranta.  Published in Lowell from 1847 to 1850, The New England Offering initially featured writings by women currently or formerly employed in the mills.  In January, 1849, it opened its pages to contributions from all American female manual workers.  The first issue appeared in September, 1847.  Beginning in April, 1848, the periodical was published usually monthly until March, 1850, with irregular volume numbering.  Harriet Farley, a former mill weaver, served as the sole editor, and in April, 1849, she became the publisher, proprietor, and traveling agent as well.  Contents include fiction, poetry, essays, historical and travel narratives, engravings, editorials, and book reviews.

Many of the following titles have a link to the article or image.  Using Find in the tool bar search for "See Holding."

Note: The following sources have been used for identifying the actual names behind some writers’ pseudonyms:

Research by Martha Mayo, Director of the Center for Lowell History

Research by Judith A. Ranta

Changes in title information, cover epigraphs, etc., are noted for the issues in which they first appear.