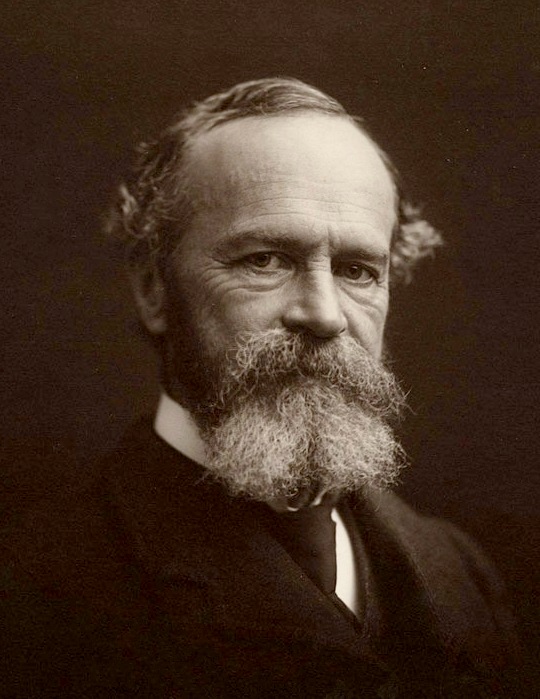 American psychologist and philosopher; b. New York, N.Y., Jan. 11, 1842; d. Chocorua, N.Y., Aug. 26, 1910. He was the oldest of five children—his brother Henry, the novelist, was the most celebrated. His father was independently wealthy, and James's early education was provided by numerous private schools in America and Europe. His higher formal education began in 1861 at the Lawrence Scientific School. Two years later he entered the Harvard Medical School, and he received his medical degree in 1869. For the next several years, he served as an instructor in anatomy and physiology at Harvard. In 1876 he was attracted to the study of psychology and shortly thereafter was appointed assistant professor of psychology. By 1880 his interests had shifted to philosophy; in 1885 he was appointed professor of philosophy at Harvard, a position he held until his retirement in 1907.

Teaching. James, an original thinker and a brilliant writer, exerted a striking influence on contemporary philosophy as a whole. His interest in psychology resulted in his adoption of radical empiricism, which in turn led to PRAGMATISM and his characteristic analysis of religious experience.

Psychology. In The Principles of Psychology (2 v. New York 1890), James argued that CONSCIOUSNESS is a stream, rather than a set of states, of human "impressions," or of isolated sensations. In a word, he rejected the older mechanical and associationist psychology for a dynamic and functional psychology; with this he also abandoned the traditional dualism of mind and body, of "thought and thing." Mind as substance he rejected for the notion of mind or consciousness as activity, regarding such activity as a means of adaptation to the environment by the individual.

Radical Empiricism. This stems partly from revolutionary changes in psychology, partly from James's reaction to traditional EMPIRICISM, particularly its determinism. James was influenced by the argument of C. S. PEIRCE that experience is not necessarily continuous, that a genuine empiricism may reveal novelties in a continuously changing process. He was moved also by C.B. Renouvier's argument that freedom is revealed in empiricism. In The Will to Believe (New York 1897), James argued that the question of freedom is not to be decidedon intellectual grounds, but by man's actions and beliefs and by what difference his decision will mean to him as an individual. James's belief in an empiricism divorced from much of its intellectual background was reinforced by the influence of H. BERGSON, particularly by the latter's contention that experience is one and that any attempt to conceptualize it distorts its true meaning. Finally, James rejected the monism of IDEALISM with its determinism and its conception of a "block universe" devoid of all novelty and chance. He held that external relations are real because they are experienced relations, relations that connect human experiences. F. H. Bradley's defense of the intellectualistic logic of internal relations he regarded as weird. In consequence, he vindicated a pluralistic universe, that "concatenated unity," which he maintained is rooted in a radical empiricism than in logic (A Pluralistic Universe, New York 1909).

Pragmatism. Although he attacked an excessive intellectualism, James did not deny the value of intellectual activity provided it was correctly guided. Conceptualization often falsifies reality, but concepts and ideas can be highly useful in the practical sense when they are grounded upon experience. James rejected both the correspondence and coherence theories of TRUTH and held that truth was pragmatic, that the true is that which is the practical and the best (Pragmatism, New York 1907). Truth is utilitarian; man's ideas are true insofar as they are useful and practical in resolving his problems. For James, truth is something relative, expedient, useful, and practical. James not only applied these criteria of truth to metaphysical problems, but he was also greatly concerned to show how such a pragmatic conception of truth could be used to justify religious ideas and confirm religious experience. For James, a religious belief is to be judged not on intellectual grounds but on the concrete differences it makes in the life of the individual. Modifying Pascal's wager, he declared there is no problem of an intellectual proof for the existence of God. the problem for the individual is this: if the question of God's existence is a real possibility to him, a "live hypothesis," as James termed it, then it is necessary for him to go beyond any purely intellectual evidence and decide for himself whether he should believe in God. He cannot suspend judgment; agnosticism is untenable, for it means one acts as though God does not exist. The issue is one of an existential decision, rather than a summing up of evidence, which James held can never be completely summed up.

Religious Experience. In The Varieties of Religious Experience (New York 1902), James was convinced that there is an empiricial confirmation for the religious hypothesis. The religious experience and the needs of the individual demand an immediate answer to the question of God's existence. Such a requirement can be met only by a decision that stems from the "passional nature" of the individual—a decision that comes from the heart than the intellect. James's own views on religion were undoubtedly influenced by his father, who was extremely critical of the clergy but who in later life was strongly attracted to Swedenborgianism. Although James rejected all traditional religious beliefs, he felt that man's religious experience brought him in relation to a higher spiritual aspect of the universe. Such a higher or wider reality is a "something" greater than man. It may be identified with a finite God.

Influence and Critique. Although Peirce was the true founder of pragmatism, the name has been most often associated with James, for it was he who gave currency and popularity to many of its basic features and particularly to his own version of pragmatic truth. The influence of James was partly because of his person—he was a brilliant teacher and lecturer—and partly because his philosophy seemed to reflect so well the American culture and its tendency to determine truth and values by an appeal to the practical and the experiential. The philosophy of James had a considerable vogue down to the 1930s, but has since then been in large part absorbed by Logical Positivism and naturalism. As a philosophy its most serious deficiencies are its anti-intellectualism, its Relativism, its appeal to the expedient in ethics, and its justification of religious belief solely upon the value of such beliefs to the individual.

P. R. ANDERSON and M.H. FISCH, Philosophy in America from the Puritans to James (New York 1939).