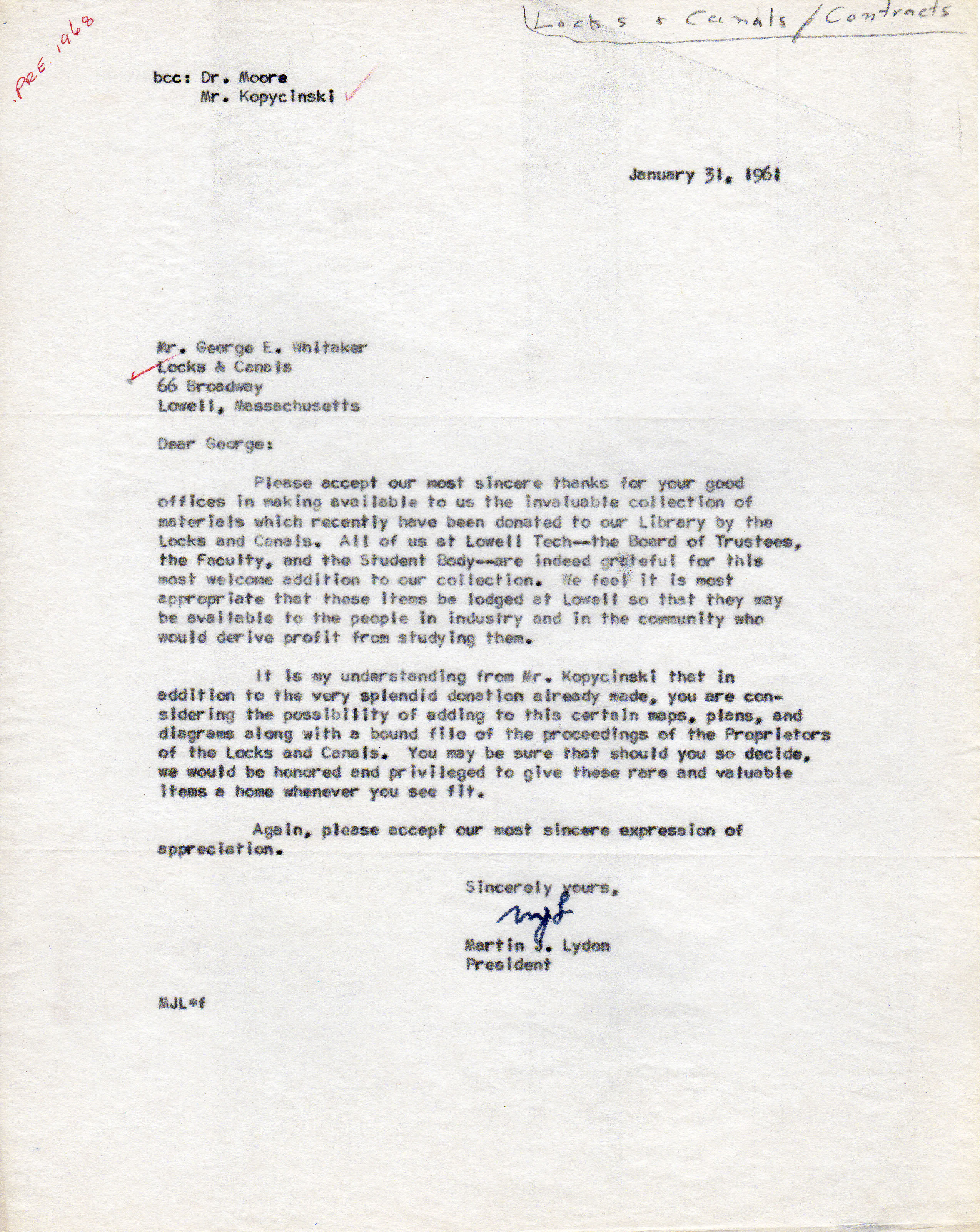 "LOWELL– The fourth floor of the stacks in the nine-year-old Alumni Memorial Library at Lowell Technological institute recently became the "final resting place" for a collection of historical treasures some of which are at least 250 years old. The collection constitutes part of the most detailed history of the city of Lowell which was acquired from the Locks and Canals. Taking the form of books, pamphlets and some 4000 paper and glass negatives, the historical record was bequeathed to Lowell Tech after remaining in the Locks and Canals library for more than a century. A segment of the vast collection was given to Baker Library at Harvard University. The Harvard grant, containing the Francis Files and other early Lowell business records, will be used primarily by students studying business administration at the Cambridge institution. Reason for the transfer of the records and pictures rests with the compressing of the Locks and Canals facilities due to a decline in that organization’s activities in our modern day. According to Joseph V. Kopycinski. Jr., Librarian at Lowell Tech, the collection represents the most comprehensive record of life in early Lowell in existence. He is in the process of shelving the books and is eager to thumb through the some 20 heavy wooden boxes of negatives. He summed up the recent acquisition by saying: "There is no telling what we may find."

HUNDREDS of literary works and records began coming from the Locks and Canals office on Broadway a week ago. Kopycinski said that until he has had a chance to check the books he receives against an accompanying card catalogue; he can’t be sure which of the books went to Harvard. He pointed out that the card catalogue must have been a “labor of love.” It was compiled through the years on out-sized cards with detailed descriptions down to individual articles in bound series of pamphlets. It is evident that several persons participated in the cataloguing as the longhand script on the cards varies. The Lowell collection of written works can be broken down into two parts. The first, of an engineering nature, contains all early records of such fields as thermodynamics and operation of the Lowell canals. The second part is the historical aspect of early Lowell. It will be several months before all the books and negatives will be sorted into place under the modern Dewy Decimal system. However, so complete is the old card catalogue that it may be used until the transition is made.

THE EARLIEST book found to date is bound in its original cover and was printed in 1719. Kopycinski emphasized that there may be earlier volumes in the collection. Works by early physicists such as Guglielmini, D’Alembert and Bernoulli also comprise part of the collection. On the local history side, one bound volume contains the text of the sermon preached by Rev. Theodore Edson in St. Anne’s church in July of 1831 marking the death of Paul Moody. Moody street in Lowell was named after him. Another volume, a government publication a hundred years old, deals with a report on armored vessels, including the Merrimack and the Monitor. Evidently, much of the work that went into stocking and cataloguing the collection can be traced to James B. Francis. Included among the negatives is a picture of Francis’ Folly, the gate he had built across the canal, which saved the city from inundation during the flood of 1936. At the time he built his "folly," he was considered to be eccentric. However, the picture showing the gate during the height of the flood, with sandbags stacked at the top, gives visual evidence of his insight. It will be necessary to thumb through most of the bound volumes to discover just what they contain. This will be necessitated due to the fact that in many cases several pamphlets and articles were bound together. The mystery of just what will be found is just a matter of time. At present, nobody knows."