City of Lowell Department of Planning and Development Collection

This Chapel Hill brochure was prepared by Elizabeth Durfee Hengen and Landscape Research in 1982 for the City of Lowell Division of Planning and Development with funds from the Community Development Block Grant Program. 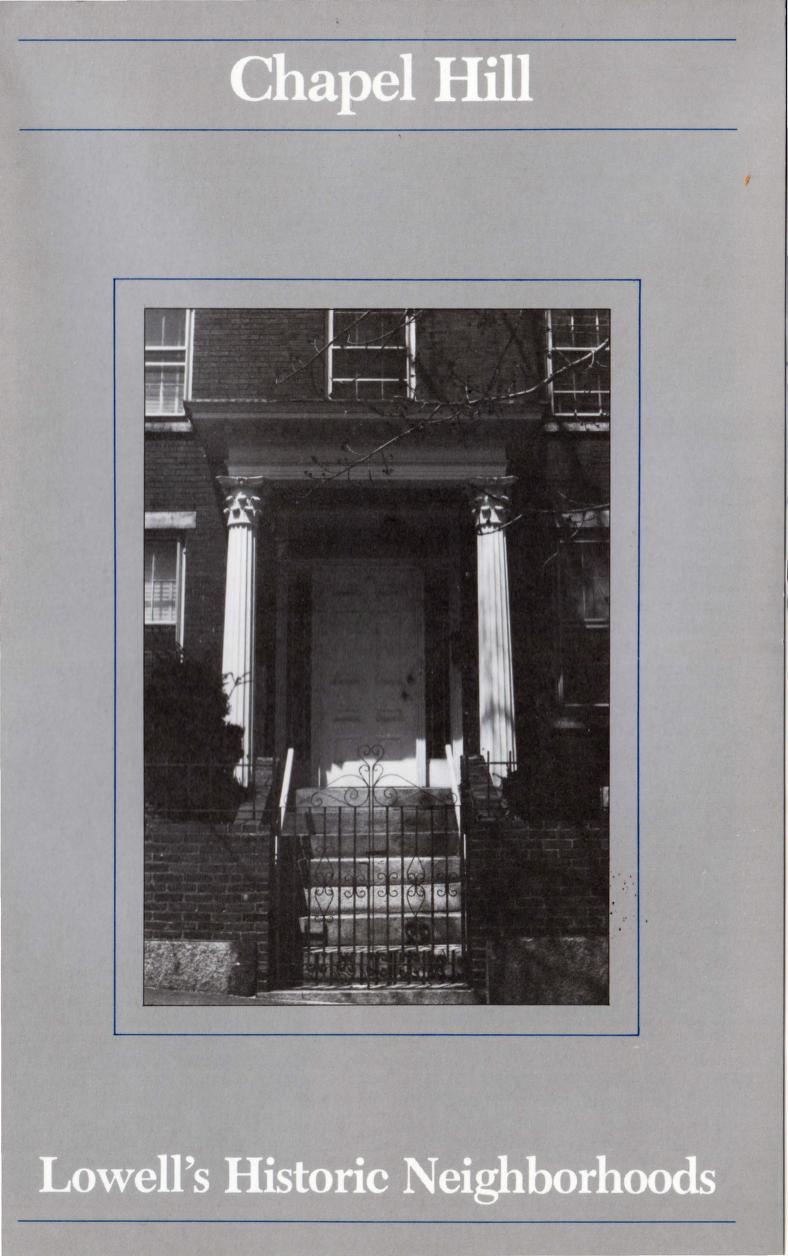 From page 1 of the brochure:

"At the center of Lowell, Massachusetts lie the rivers, dams, canals, and factories which contributed to the growth of one of America's greatest manufacturing centers. Although considerable attention has been focused on the study of Lowell's central core, the majority of Lowell's residents in the mid-to-late nineteenth century resided outside the city center. The colorful names of Lowell’s neighborhoods - such as Chapel Hill, Belvidere Village, Pawtucketville, Centralville, and the Highlands - provide only a hint of the important role these areas had in shaping the city's history.

Among the earliest of these neighborhoods is Chapel Hill, with representative residential architectural styles from nearly every period of the city's industrial development. Enveloping a hilly site, Chapel Hill is bounded at the east by the Concord River, at the west by Gorham Street, and at the north and south by Charles Street and Hale’s Brook.

Chapel Hill's settlement began in the 1820s, when Lowell was emerging as a major textile center. Although many of the town's residents were employed in the cotton mills and lived in company-owned houses, the growing community attracted others: shopkeepers, carpenters, masons, policemen - who supplied the goods and services required by a rapidly expanding town.

For individuals wishing to build their own houses, Chapel Hill proved to be the only available land convenient to the center of Lowell that was neither in corporation ownership nor separated from the mills by a river. Unlike Centralville and Washington Square in Belvidere, which date from the 1830s, there was no predetermined plan for the growth of Chapel Hill.

Instead of following a previously laid-out grid of streets and house lots, the area grew organically, conforming to the topography and to the random sale and development of house lots. Paralleling the north-south axis of Gorham Street (the original colonial route between East Chelmsford and Billerica), Central Street wrapped around the hill, Chapel Street ran over its ridgeline, and Lawrence Street followed the Concord River. A network of short cross streets (Charles, North, Ames, Mill and Elm) soon connected them."