Texas Jack & The Peerless Morlacchi, An Exhibit by Peter Alexis and Henry Kucharzyk 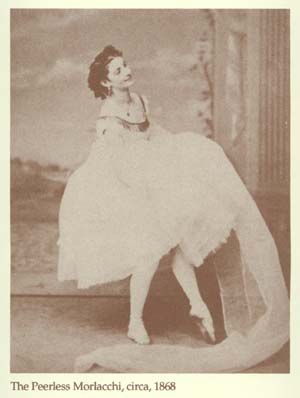 One of Lowell's most interesting and unique couples certainly has to be Texas Jack and the Peerless Morlacchi. just how did a Confederate soldier-turned-cowboy-turned-U.S. Government Scout and plainsman come to meet and marry a classically trained ballerina from Italy?
And how did they happen to settle in Lowell?

Giuseppina "Josephine" Morlacchi was born in 1836,1843, or 1846, depending on which source you choose (in the 19th century, one never asked a gentlewoman her age!).  By the age of six, she was enrolled at the famed ballet school of La Scala in her hometown of Milan.  In 1856, Josephine made her debut in Genoa.  After traveling the circuit in major European cities such as Rome, Lisbon and London, she was signed by noted manager, John DePol, to headline an American tour.

Mademoiselle (Mlle.) Morlacchi made her American debut in the ballet extravaganza, The Devil's Auction in New York October 23,1867 By December, the company moved to Boston, where the choreographer became ill and returned to New York. Now, Josephine had the opportunity to do her own choreography, something she had been wanting to try.

As both prima ballerina and choreographer, Mlle. Morlacchi met the challenge. She relished developing new ideas and dance steps. In Boston, she arranged a can-can for the featured dancers, thus becoming the first person to introduce this French dance style to America.  The can-can became a permanent addition to most of her productions. As the can-can rapidly spread further west, other troupes took the liberty to develop it into a wilder and racier number than Josephine's version.

Celebrated as one of the premiere dancers in the country, the Peerless Morlacchi, as she was known, used her fame to fight for the rights of lesser known cast members. The entertainment business could be unscrupulous in the 1860s and 1870s. Many times, a dancer, actor, or other entertainer had no recourse if a promoter or agent did not honor his or her contract or if a theater manager ran off with that evening's receipts. Naturally, the lower the actor's billing, the greater the opportunity for someone to take advantage of that actor. On many occasions, Josephine stood up on behalf of the younger dancers and looked out for their interests.

Although she had travelled to many different cities, Mlle. Morlacchi enjoyed the atmosphere of Boston most of all. While she loved performing in Boston, she never really wanted to live in a big city. In addition to ballet and choreography, another dream was to own her own home in the country and at the same time have access to Boston by railroad.

One community that fit her needs was Billerica. By December,  Josephine and her older sister, Angelina, purchased a farmhouse along with twenty acres of land in East Billerica. Another benefit to living in Billerica's countryside was its proximity to Lowell and all that the mill city had to offer. Lowell had 40,000 people and hundreds of businesses by this time.

In many ways, Josephine was an anomaly for a 19th century entertainer. Firstly, she saved her money wisely which, enabled her to purchase the farm. Secondly, and more significantly, Josephine was able to preserve the dichotomy between her on-and-off-stage personae. Onstage, she was the Peerless Morlacchi, while off-stage, she was Josephine, a quiet, almost shy woman whose idea of relaxation was doing chores around the farm. She was never caught up in her fame.

In the short span of twenty-six months since her arrival in the United States, Josephine had quickly become the premiere danseuse of the American ballet scene. She was adored by the public, sought after by theaters, had purchased a beautiful farmhouse for Angelina and herself, had formed her own troupe and established herself as a champion for the rights of other dancers.