John Baker Omohundro was bom July 26,1846, near Palmyra, in Fluvanna County, Virginia.  Like many youngsters during this era, Jack was particularly interested in the outdoors. While still a boy, he became a skilled hunter, fisherman, and horseback rider.

By 1861, Jack had made his way to Texas in hopes of working on a cattle ranch. Soon after the Civil War began, Jack received news that his older brother, Orville, had joined the Confederate Army. Jack returned to Virginia and attempted to enlist also, only to be turned down because of his age. However, he did serve as a courier for General John B. Floyd.

In 1864, Jack enlisted as a private in Orville's company. Despite his gaining notoriety in Virginia as the Boy Scout of the Confederacy, 1864 proved to be a dismal year for Jack: General J.E.B. Stuart was shot and killed just moments after Jack delivered him a message. Five weeks later, Jack himself was wounded. But it was during the fall, when the Confederate Army was losing  ground that Jack heard the worst possible news: his mother had died after a long illness.

Following the war, Jack returned to Texas and the cattle ranches. For the next two and a half years, he continued his cattle drives, mostly along the famous Chisholm Trail. Late in the summer of 1869, one such trek took Jack further north into Nebraska, along the Platte River.  After the drive was completed, he decided to settle in the small prairie city of North Platte on the river. It was here that he met a man whose life paralleled his own so closely that a lasting friendship bloomed.

Buffalo Bill Cody had arrived in the Platte Valley about four months before Jack. Serving as a scout with the U.S. Army, Bill had recently been assigned to Fort McPherson, about seventeen miles down river from North Platte. At Bill's request, Jack moved down to the fort later that winter.

Jack tried his hand at bar-tending and also became a teacher for children at the fort. As an ex-Confederate soldier, it was nearly impossible for him to get a government job. Through his friend's perseverance, Jack finally received his official appointment as United States Scout.

Whether hunting, scouting or dealing in Indian affairs, Jack had established himself as one of the most popular men west of the Mississippi and the equal of his friend, Buffalo Bill. Due to his Indian blood, Jack was able to communicate and empathize with Native American tribes. He was the particular favorite of the gentle Pawnee tribe.

His fame, like Buffalo Bill's, soon spread east, kindled by the popularity of the dime novel. The exploits of Buffalo Bill and Texas Jack, related by popular authors such as Ned Buntline, reached a wide audience through these small books crammed with easy-to-read adventures.

Inspired by the success of his dime novels, Buntline decided that if he could get these famous plainsmen on stage with one of his western scripts, audiences everywhere would flock to see them. Buntline realized that people considered Buffalo Bill and Texas Jack the living embodiment of the American West.

By the late fall of 1872, Buntline wrote Bill Cody, explaining his idea.  At first Bill wanted nothing to do with it, but with Jack's  encouragement, he finally acquiesced, with the condition that Jack would go with him.  They were to go to Nixon's Opera House in Chicago by December 16. Neither one knew what to expect.

'The Scouts of the Prairie'

Even though he had not even thought about what to write for a script, Buntline was not concerned. His only foreseeable problem was the female lead. He needed someone with stage experience as well as a nationally recognized name. The Peerless Morlacchi and her troupe had just completed an engagement at Nixon's Opera House the previous week. Buntline asked Josepine if she would consider playing the role of an Indian maiden. Always interested in new challenges, Josephine accepted the offer. Buntline called the drama, The Scouts of the Prairie. 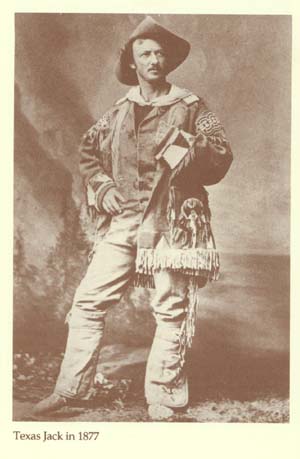 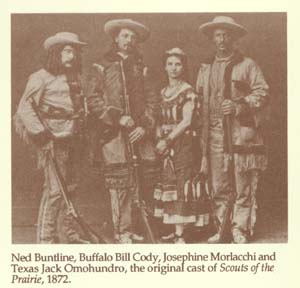 Its popularity surpassed Buntline's wildest dreams. It was obvious that the public did not mind if the actors missed a line or ad-libbed as long as Texas Jack and Buffalo Bill were portraying themselves. They toured most major Eastern cities, playing to packed houses night after night. The popularity of both the play and its stars continued to grow.

It did not take long for the cast to notice that Josephine and Jack were spending more and more time together. Yet, at the end of the first season in June of 1873, they went different ways. Josephine continued touring with her ballet troupe, while Jack was hired as a scout for hunting parties out west. However, they must have been thinking about each other all summer because one week before the show's second season, on August 31, 1873, Josephine and Jack were married at St. Mary's Roman Catholic Church in Rochester, New York. Although she was legally Josephine Omohundro, she continued billing as Mlle. Morlacchi. The retention of her maiden name keeping with her progressive nature, as well as her stature as a star.

Some changes took place over the next few seasons: Ned Buntline was replaced by Wild Bill Hickok. New plays were written and more actors hired. Yet the popularity of the western dramas never waned. Jack and Josephine could not spend as much time as they wanted back home, so what little free time they had was spent on the farm.

After the finish of the 1875-76 season, Jack and Josephine decided that they did not wish to tour so extensively. On the other hand, Buffalo Bill knew that this was what he wanted to do for the rest of his life.  Texas Jack and Bill parted company the best of friends.

Jack occasionally wrote articles for various New York publications or was hired as a guide for a hunting party. For the most part, however, he and Josephine were in semi-retirement.  They enjoyed Lowell so much that they bought Suffolk Hall, at the corner of Market and Suffolk Streets (where Charlie's Corner and the Contakos Bar are presently located).  At the time, Suffolk Hall was a three story structure: the first floor was composed of storefronts, the second floor was the hall, while the third contained apartments.  Whenever they were out of town, Angelina Morlacchi took care of both Suffolk Hall and the farmhouse (which they now referred to as "the summer home").

End of the Trail

By the spring of 1880, they decided to tour Colorado.  Jack had been interested in the new silver-mining boom town of Leadville.  Both had a small troupe touring the area.  Due to the high elevation and poor air quality Jack caught a cold, which developed into pneumonia. Josephine tried to nurse him back to health, never leaving his side, but nothing helped. Jack was only 33 years old when he died on June 28, 1880.

After the furneral, Josephine returned to Lowell. Once in a great while, the Peerless Morlacchi danced in small productions iin Lowell, but she never again toured.  She taught dancing and volunteered her time and services to the community.  The one goal which she never managed to accomplish was to open a dancing school for the mill girls.

Her sister, Angelina, suffered a stroke and subsequent paralysis.  Josephine cared for her until Angelina's death August 18, 1885.  Not long afterwards, Josephine was bedridden with stomach cancer and died on July 23,1886, far from her birthplace and with no family at all, although she did have many friends.  Both sisters are buried at St. Patrick's Cemetery in Lowell.