Polonia: the Greater Lowell Community of Past & Present

HISTORICAL SKETCH OF POLONIA  IN LOWELL

Polonia means a community of people of Polish ancestry living outside of Poland. Lowell's Polonia began in the early 1890's. By 1910 only 20% of Lowell's population of over 100,000 were native-born Americans of native parents. Poles counted for 2,000 of the remaining 80,000. The 1915 Massachusetts Census listed 3,108 people of Polish descent living in Lowell. An International Institute social worker's report claimed that 5000 Poles were living in Lowell in 1918.

They generally came looking for a better economic and political life. For a significant number who came from southern Poland, Lowell was their first destination. Others found their way here after having sampled mining in Pennsylvania or factory work in other cities.

Once in Lowell they banded together for identity and support. They pocketed certain neighborhoods, notably in Centralville, Belvidere, and two small areas on either side of the Concord River. Many could only afford rented rooms in crowded buildings. An International Institute social worker's report praises the cleanliness of their homes while decrying the deplorable conditions of the buildings. Recently, a man in his seventies recalled that his mother, who was born on a farm in Poland, was disheartened by these conditions and hardship and "never wanted to talk much about Williams Street."

Some traded their hard life in "the old country" for a hard life in the factories. Both men and women toiled in Lowell's textile mills, many crossing the bridge daily to the Boott Mill. Some Polish workers supported the 1903 textile strike and unions sympathetic with homeland politics. Although Poles from various social and economic backgrounds came to Lowell, many were farmers. Some of them, loyal to their roots, bought small farms in Lowell's outlying areas and neighboring towns. A few started small businesses to serve basic needs and interests.

Grocery stores, bakeries, funeral parlors, and the chronicler of the community, the photographer, soon became evident in Polonia. Centralville was home to many of these new enterprises. One storefront on Lakeview Avenue was an early grocery store, then a funeral parlor, and much later, a store occasionally sold Polish specialty food.

Very soon, national fervor and religious ardor would become the driving forces behind the need to build a church. It was felt that the Roman Catholic hierarchy was slow in responding to requests for a Polish parish. The growing Polish community's formal religious life first took place in St. Joseph's Church on Lee Street. Saint Joseph's, however, was a French Catholic church. Struggling to adapt to a new world, Lowell's Polonia found itself seriously divided. One small group appealed to the newly formed Polish National Catholic Church of Scranton, Pennsylvania, for leadership, and became affiliated with this church, forming St. Casimir's Parish. Their first church, erected in 1901 in Belvidere, was later sold to St. Joseph's Lithuanian Paris.  In 1911, under the pastorship of the Rev. Paul Kuznik, a new church was consecrated on the site of the present St. Casimir's Church in Centralville, where a majority of the new parishoners had settled. A significant number of Poles from Centralville and nearly all Poles living in Belvidere, remained Roman Catholic and were the pioneer families of Holy Trinity (Polish) Parish. The Holy Trinity Church was consecrated in 1904. Saint Stanislaus School, the first Polish parochial school in the archdiocese, opened in 1907. Msgr. Alexander Ogonowski was Holy Trinity's first pastor and served until 1955. The emotional wounds resulting from this early rift in Polonia have healed through the years. Each parish has retained a distinct Polish influence and has ministered to subsequent waves of immigrants. 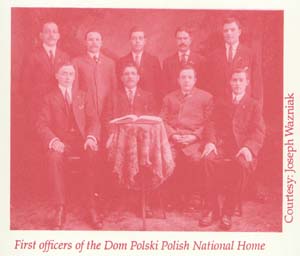 A truly unifying force for early Polonia was the Polish National Home Association, the DomPolski. In 1909 Stanislaw Wozniak organized a committee to plan the building of a community center.  He was elected its first president in 1914 when the building opened.  The Dom Polski became Polonia's hub.  Weddings, meetings, dances, commemorations, rallies, and Polish and English classes were all held there.  Through the Dom Polski, relief efforts for Poland were organized, including a major effort launched in the heady days of Polish independence in 1928.  A more recent effort was undertaken during the imposition of martial law in Poland following the first shock waves of the Solidarity movement.

Throughout Polonia's history in Lowell, there have been clubs to foster Polish culture and language, church-affiliated organizations, committees to support naturalization and Americanization," and political clubs.

In 1917, the end of the first stage of Polish settlement in Lowell coincided with the beginning of World War I during which Polonia's sons served in both Polish and American armies. The Polish community of Lowell assimilated more actively Members of Polonia's athletic teams and musical groups began to fan into city-wide teams and organizations.

In the early 1940s patriotism again prompted Polonia's sons and daughters to serve in World War II in the United States Armed Forces and in Red Cross efforts. Returning veterans formed the nucleus of the Polish-American Veterans Association which built the PAV Hall in 1952. A few members were willing to take personal financial risks in order to accomplish this effort.

The end of the war also saw the arrival of a new group to Polonia. Families, displaced by the war, immigrated to Lowell. They benefited from the experiences and support of the established community, and in turn, offered fresh insights and renewed enthusiasm for Polish culture.

The process of assimilation continued. Intermarriages, movement out of ethnic neighborhoods, and wider educational opportunities, caused many to change their involvement with Polonia. Some remained committed within Polonia, while others served both Polonia and the Greater Lowell community. Community wide political involvement came to maturation in 1954 with the election of John J. Janas as Lowell's first mayor of Polish descent and later, State Representative. 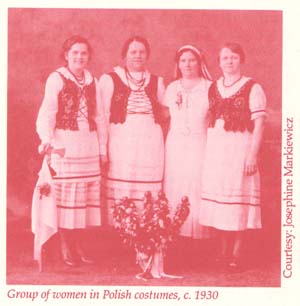 Lowell's Polonia of today is quite different than that of 1900, with a trickle of newcomers infusing a different quality. One arriving from Poland at the turn of the century might well have brought news of someone's family, village gossip, or report on the status of a homestead left behind. Contemporary immigrants serve as a link to world events and are a nostalgic reminder of the culture and language of grandparents and great grandparents. There are many layers to Polonia. There remains a small layer which is still deeply tied to Poland. Other layers are defined by their degree of assimilation and/ or commitment to the spirit of Polonia.  They observe some Polish customs, have varying degrees of proficiency in the Polish language, and are interested in and knowledgeable about the history and culture of both Poland and Polonia. Some generously share this enthusiasm and expertise with others through participation in civic commemorations, flag-raisings, concerts, polka dances, and folk festivals. Polonia continues to contribute to the cultural and historical life of Lowell, a city that honors stories such as those of Polonia.

The Lowell Polish Cultural Committee was formed in 1981. This small but stalwart group, previously known as the Polish Regatta Committee, had been involved in all of Lowell's Regatta Festivals, as well as the National and Lowell Folk Festivals. The stated goals of the Committee include fostering an awareness of Polish culture and appreciation of the history and contributions of Lowell's Polonia. The Lowell Polish Cultural Committee serve as a resource for individuals and groups and donates many of its proceeds to Scholarship Funds and to other cultural organizations.

Polonia: The Greater Lowell Polish American Community, Past and Present coincides with the Bicentennial of Poland's Constitution. Focusing on five broad themes: Time and Place, Soul and Spirit, Progress and Participation, Work and Play, and Words and Music, the exhibit presents the uniquely Polish thread that is woven into Lowell's multi-cultural tapestry. The Lowell Polish Cultural Committee hopes to show the vibrancy and growth of Polonia through the years, the contributions of its members to their own ethnic community as well as that of Greater Lowell, and both constancy and change within this defined community. The importance of churches and civic organizations and values and traditions ofPolonia, are apparent in the exhibit. While certain leaders or prominent members of this community may be deservedly recognized, the exhibit's focus is on Polonia as a whole and meant to be a tribute to all her members.