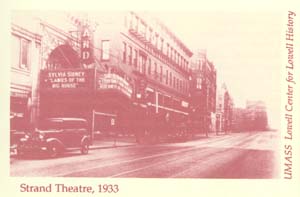 Picture it: Lowell Goes to the Movies

Movie Houses on the Merrimack

From the 1920s to the 1960s, downtown Lowell was a major entertainment mecca in the Merrimack Valley, and movies were what people flocked here to see.

The Strand, the Merrimack Square, and RKO Keith featured first run films and fans stood in line for hours to catch the current blockbuster.  At second and third run movie houses like the Rialto, the Royal, the Crown, the Capitol, the Victory (later, the Tower/LGM Memorial/ Palace), and the State (the Opera House/Gates), they saw B-movies, serials, cowboys, comics and their favorite movie stars the second and third time around.

Lowell was caught in an entertainment frenzy even before these legendary theaters attracted crowds.  That happened here, as it did all over the nation when Thomas Edison invented motion pictures in 1892.  His half-minute kinetescopes featured Vaudeville players, circus stars, animal acts and Wild West celebrities like Buffalo Bill Cody and Annie Oakley.  They were shown in kinetescope parlors which sprang up around the country after the first one opened in 1894 in New York City.  People paid 25 cents, later only a nickel, to peer at five Edison shows through special viewers.  Lowell's early movie palaces included one called the Edisonia.  Others were the Parlor Theatre and the Bijou/Gaiety/Boston. All showed kinetescopes in the 1890s. 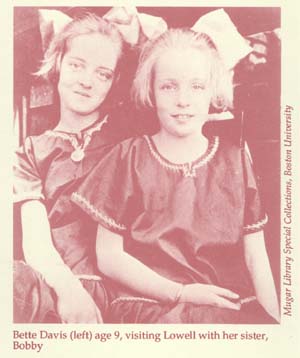 Motion picture venues changed within a few years when entrepreneurs realized that they could put a crowd into a hall, project motion pictures onto a screen and charge money.  It was the Lumiere brothers from Lyons, France, rather than Edison, who fostered this advance when they invented a machine which was a predecessor of today's projector.  On December 28, 1895, the Lumieres first projected ten short motion pictures onto a screen to a crowd at Paris' Grand Cafe.  They brought their show to the United States in 1897 and soon rivaled Edison with demonstrations in many cities.  Edison caught on, abandoning his kinetescope shows for public presentations in theaters.  Popular entertainment was forever changed, thanks to these movie pioneers.

Movie going was a grand event and escape for working people, made more special when some
latest hit was featured. "I had a standing 'date' with my dad when the newest musicals came to town starring Fred Astaire, Ginger Rogers, Alice Faye, and Eleanor Powell and played in Lowell's first run houses," said Lowell native and movie fan, Dolores Dion, looking back to the 1930s.

Movies provided the best babysitter in town on weekends. Kids headed to second and third run flicks at the Rialto, Royal, Crown and Capitol, taking the bus for a nickel downtown and back, and getting in to see a movie for a nickel, dime or quarter.  "We saw Westerns at the Royal - Tim McCoy, Buck Jones, Tom Mix and Ken Maynard. There were Frankenstein movies and gangster films and the animal trainer, Clyde Beatty.  We got in for a dime," said Lowellian Charles Tsapatsaris, who organized efforts to save the Strand in the early 1970s.

* The Strand, located on Central Street where Lowell  Academy of Hair Design  now stands, was a local showcase and famous for its lavish lobby.  It opened amid splendor on October 1, 1917, to a twenty-six piece orchestra.  It stopped showing films in 1968 and, despite efforts by preservationists and the Save Our Strand Campaign, was torn down in 1974.

*The RKO Keith on Bridge Street, where Petren Building and the parking lot are located today, operated from 1911 through 1963.  First called B.F. Keith's, this was a regular stop on the Vaudeville circuit.  Keith's featured three shows a day, including a silent movie and pit orchestra.  When Vaudeville faded, shows changed to movies that starred "names" on the circuit.  Keith's closed in 1963 and remained empty until August of 1975, when the City foreclosed on it for back taxes.  Petren purchased it in 1976 and razed it for parking.

*The Merrimack Square on Paige Street stood where John Street Garage is presently.  A converted corporation boarding house, this was a movie palace from 1909-1952 and had a lobby of Spanish decor.  Owned by several companies, it ended as a Paramount property.  The City took the theater by eminent domain to demolish it for parking in December of 1953.

*The Rialto on Central Street was the original Boston and Maine Railroad terminal and still stands, although its marquee was removed in 1987.   It housed the Owl Theater before the Rialto reigned from 1920 to 1960.  Norman Glassman purchased it in 1930 and ran successful second-run films along with crowd-drawing Gift Nights.  He converted the Rialto into a bowling alley in 1960 after opening the Lowell Drive-in on Pawtucket Boulevard.

*Norman Glassman also operated the Capitol at 376 Middlesex Street from 1926 to 1959.  The City took this by eminent domain in order to construct the Lord Overpass over Thorndike Street.

*The Crown on Middlesex Street operated from 1916 until 1949 and featured second and third run films.  Its marquee remains today over an electrical store on the site.

*The Royal, owned by the Sokolowski family, was in operation on Merrimack Street from 1926 to 1959 and was also popular for second and third run films.  A portion of that theater remains today behind a storefront.

*The State, on back Central Street, was originally the Lowell Opera House and later, the Gates.  Constructed in 1887, it was even more beautiful than the Strand, according to Arthur Keenan and Alfred Burke.  In its final days, stage plays were also presented here.  It was torn down in 1956, a victim of urban renewal.

*The Victory/Tower/LGM Memorial/Palace was open from 1926 to 1951 on East Merrimack Street.  It was owned by Norman Glassman and, for some of that period, was managed by Mr. Sokolowski.  The theater's marquee remains today over the vacant former showroom of Gervais Buick.