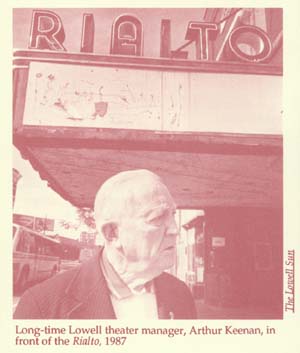 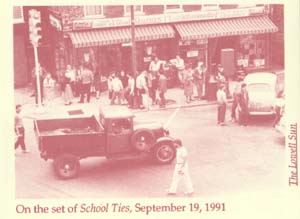 Many people worked in Lowell's theaters as managers projectionists, ushers, and ticket-takers. Managers were well respected men who loved their jobs and had a flair for showmanship. Two names stand out: Arthur Keenan and the late Nat Silver.

"We were it.  It was a front house operation. I greeted the people in the lobby.  We had ushers in every aisle who wore white gloves.  I inspected them.  We were busy, but well-paid.  I loved the business," said Keenan, who was Strand's manager from 1930 to 1935 and 1946 to 1972 and the Merrimack Square manager from 1935 to 1946.  One former Strand usher, Bob O'Connor, now an officer at Shawmut Bank, recalls Keenan: "Arthur Keenan was a strict disciplinarian.  Our uniforms had to be impeccable.  We had to stand with our backs to the screen at all times.  As life went on, I realized some of the values that he passed on.  He did a fine job."

Selling the Show
The managers competed with promotions designed to bring crowds in and keep them coming back.  “I tried to be a master of exploitation, drawing up my own promotions.  We had cowboys on the sidwalks trying to bring people in," said Keenan. Other promotions included Rialto dish days, Lucky Boy and Girl contests, scrap metal drives, broadcasts of Tom Clayton's radio program, The Answer Show, from the Strand and Rialto, on-stage fashion shows and talent contests.

From Here to Hollywood
They headed West to Hollywood but their roots were here in Lowell. Among Lowell's legends, Ruth Elizabeth Davis stands out. She was born in 1908 on Chester Street in the home of her maternal grandmother, Eugenia Favor, and became the outspoken, Oscar-winner, Bette Davis.

Olympia Dukakis, another Oscar winner, grew up in Lowell, attended Bartlett School and was honored with her own special Welcome Back Day in 1990.

Wendell Corey, born in Dracut in 1914, was a direct descendant of Lowell mill workers. Others who have gone from here to Hollywood include television host, Ed McMahon and Michael Chiklis (TV's The Commish).  Tony-winning stage actress Maryann Plunkett, who has appeared in many television series, is also from Lowell, as is Scott Grimes, who went from the Highland Players to a career in California. Stuntman Robert Tessier, actor Michael Ansara, character actor Karl Lukas and actress Nancy Kelly are other stars with roots in this region.

On Location in Lowell
Today, the Mill City's turn-of-the-century ambience attracts film producers.  In 1991, Paramount Studios turned Dana's Market on Gorham Street into the setting for the opening scenes of its well received School Ties. Other films shot in Lowell or currently in production include Saskwatch, The Beginning of the End, and Lost Eden.