On Andover Street in Lowell, Massachusetts, two grand homes, each a mirror image of the other, stand as visible testimony to the love and affection between two life-long friends - Eli Hoyt and Freeman Shedd.  This brochure is the story of one of those men, Freeman Ballard Shedd, a most caring and generous individual.

Freeman Ballard Shedd was born in Lowell, Massachusetts, December 29, 1844, the son of John and Asenath Shedd.  Freeman was one of five children born to the Shedds and one of the three who survived infancy.  His brother Joshua died at the age of three months from "cholera infantum" and his sister Elizabeth died from typhus fever.  His father John Shedd, a laborer, died in 1858, and at the age of fourteen Freeman found himself head of the Shedd household, His surviving siblings were his brother William and his sister Miriam.

Freeman attended public school in Lowell and, while in high school, began working for E. A. Staniels, a druggist whose shop was on the corner of Middlesex and Central Streets.  The Civil War soon touched life in Lowell, and on August 8, 1862, at the age of seventeen, Freeman enlisted in the 33rd Massachusetts Regiment at Lynnfield, Mass.  He began active duty the next day as a private in Company A. Freeman soon put his pharmaceutical knowledge to use in military hospitals and was promoted to Hospital Steward in May of 1863.  He assisted at several famous battles, including Gettysburg, and by the time his service was terminated in June of 1865, he had seen three years of active war duty.  He was then only twenty years old.

After the war, Freeman returned to Lowell and resumed working at Staniels' Drugstore. It was during this period that he became personally and professionally associated with Eli W. Hoyt, a man who would become his life-long friend and partner.

Eli W. Hoyt was born in Alexandria, New York, September 5, 1838 and began working for E. A. Staniels when he was fourteen.  He was later taken on as a partner and, upon the death of Staniels in 1861, became sole proprietor of the drugstore.  Nine years later he formed a partnership with Freeman Shedd.

The up-and-coming firm of E. W. Hoyt, purveyors of Hoyt's famous German cologne, was one of the first firms to use advertising cards.  Freeman Shedd designed the labels and wrote the copy.  The distribution of the "cologne card" was a clever advertising strategy and soon their product had spread beyond the city of Lowell and the state of Massachusetts.  Their partnership soon outgrew the confines of the drugstore and a four-story brick building was erected on Middlesex Street expressly for the purpose of manufacturing cologne.  By 1877, Hoyt's German Cologne had found its way across the nation and around the world.  Freeman Shedd was thirty-three years old and already on his way to becoming a 19th - century entrepreneur.  In 1884, a larger brick facility was erected at the corner of Church and George Streets.

Freeman Shedd had married Amy Rowe and of the Shedds' three children, two did not survive childhood.  Their daughter Mary Belle, born in 1874, never married.  Their first child was still-born. A son, Eli Hoyt Shedd (named after his father's dearest friend and partner), was born April 10, 1876.  He died at the age of eight from cerebro spinal meningitis.  A small receiving chapel was erected in his memory by his parents and can still be seen in the Lowell Cemetery on Lawrence Street.

The "Twin Mansions of Cologne"

In 1875 Freeman Shedd and Eli Hoyt moved to their "twin mansions of cologne" on Andover Street.  These prosperous local businessmen were only thirty-one and thirty-seven years old, respectively.  They helped design the houses on approximately 60,000 square feet of property previously owned by Samuel Lawrence.  The houses were constructed by Samuel Wilkins of Newburyport, Mrs. Hoyt's brother-in-law.  The design was Mr. Shedd's - two magnificent homes, each the mirror image of the other. They shared a front veranda, inner garden, and summer house, all bearing testimony to a close and enduring friendship.  Eli Hoyt occupied the home on the left and Freeman Shedd the other.  Located on Andover Street, a gracious tree-lined street in the Belvidere section of Lowell, the design placed both houses on either side of a driveway which sloped down to a barn on East Merrimack Street. 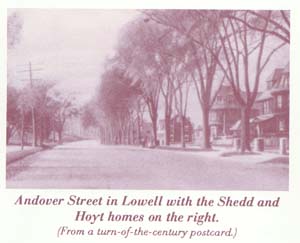 Both residences were originally of a wood finish, but around the turn of the century, the outer finish of the Shedd house was stuccoed over. The houses had slate roofs, red sandstone foundations, black walnut woodwork throughout, hand-decorated walls and ceilings, parquetry floors and six open fireplaces. A broad piazza ran along the front of the houses with a red tile floor and vine-covered railings. The high point of the third floor was a large billiard room with a view across the Merrimack River to the distant New Hampshire mountains.

About 1884, two barns were built on East Merrimack Street, one for each home, with driveways bordering the outer sides of the residences. These massive structures were built by James W. Bennett, and had minaret-like towers. They were of solid brick and heavy timber construction, and living quarters were provided in each barn for a coachman and his family.

On February 9, 1887, Eli Hoyt, ill for several years with tuberculosis, died at the age of forty-eight. It was his friend's death which years later was to provide Lowell General Hospital with an enormous legacy to provide a building expressly for the treatment of "individuals suffering from incurable disease." After Hoyt's death, Freeman Shedd was  left sole proprietor of a burgeoning enterprise which included the Shedd Block on the corner of Central and Appleton Streets.

A Gift To The City

In 1909 Freeman Shedd presented the city library with a huge Japanese Imari vase over five feet tall.  Today this fine porcelain jar is located on the landing going up to the second floor's Memorial Hall. This unusual art treasure is a fine example of 19th century export ware and was made in Arita, Japan by Kanzo (the finest artisan of his time).  It was the largest porcelain specimen produced in Japan.  The vase was exhibited in the Columbian Exposition in 1893, the Pan American Exposition in 1901, and later at the Paris Exposition.  The twenty-five figures in the decoration depict Genroku Hanami Odori dancers performing the Flower Festival Dance, and accurately illustrate the different costumes of the Genroku Period (1688-1703). 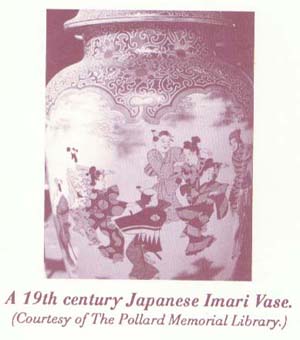 In July of 1910, Freeman Shedd presented to the City of Lowell a 50 - acre tract of land adjacent to Knapp Avenue in the Belvidere section of the city. The land was to be used expressly as a park and playground for the residents of the city.  Massive granite pillars frame the entrance to Shedd Park, located at the corner of Rogers Street and Knapp Avenue.  A stone tablet on the gateway to the park states:  "Shedd Playground A Gift to the City of Lowell by Freeman Ballard Shedd A.D. 1910."

It was Freeman Shedd's wish "That it shall forever be used as a park and recreation or playground for the citizens and children of the City of Lowell and for no other purpose."  (From his letter dated July 14, 1910.)  When asked by a reporter what prompted the gift, he replied:  "I was born in Lowell, have always lived in Lowell and hope to die in Lowell.  All my success in life has come in Lowell and I felt that I wished to leave behind me some sort of a monument which would be of use and benefit to the people of the city.  It seemed to me that a park and playground on this land would be a benefit to everybody and would be a permanent memorial which can be developed, owing to the nature of the land, into a magnificent playground ......" 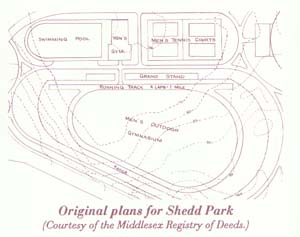 The original plan called for a running track, a soccer field, two baseball fields, eight tennis courts, a children's playground, an open-air theatre, a swimming pool, a wading pool for small children, a pond at the lower end, 11,000 square yards of walks and drives, and a varied selection of shrubs and trees.  The city eventually built a stone field-house with toilet facilities, showers, lockers, and quarters for changing clothes.  This handsome structure is still standing and provides a haven for those seeking shelter during a sudden rain shower or on a hot summer's day.

When Freeman B. Shedd died in March of 1913, at the age of sixty-nine, he was survived by his wife Amy and his daughter Mary Belle.  Under the terms of his will, if his daughter Belle left "no issue living at the time of her decease,"  $100,000 would be released from his estate to the city of Lowell for the development of Shedd Park.

This memorial gift was realized when Freeman Shedd's wife Amy died on August 4, 1924 at the age of seventy-six.  Because his daughter Mary Belle died without issue (in Tilton, New Hampshire, October 25, 1921), $100,000 was released to the city of Lowell for the development of the park and playground.  The terms of his will took effect when his wife Amy died less than three years after the death of her daughter Belle.

Other organizations also benefitted from Freeman Shedd's generosity.  One hundred thousand dollars was left to The Northfield Seminary in Northfield, Massachusetts; $100,000 to The Berry School in Rome, Georgia; $5,000 to the 1st Unitarian Society; $5,000 to the Chase Home for Children in Portsmouth, New Hampshire; and $800,000 to Lowell General Hospital, with the provision that a building be erected for the care of patients suffering from incurable diseases.  It was to be named the Freeman Ballard Shedd Memorial Building. Local residents know it today as the Shedd Building.

The history of The Berry School in Rome, Georgia is quite interesting, and his gift to the school shows Shedd's compassionate and philanthropic nature.  Because there were no free rural schools in the area, The Berry School was founded in 1901 by Martha Berry as a free boarding school. It was known as The Boys' Industrial School and offered a high school diploma.  For many of the young men, it represented their only opportunity for a secondary education.  Because they could not afford tuition, every boy worked in the gardens and on the farms to help meet their expenses.  Besides Shedd's generosity, other benefactors included Andrew Carnegie, President Theodore Roosevelt, and Henry Ford.