Painting
Although he sketched from nature from the age of nine, John Coggeshall never attended art school.  He felt compelled to learn a trade due to family financial difficulties.  But once he had established his engraving firm in Lowell, there was time to pursue his first love, painting.

It was the French Barbizon and Munich painters who attracted American interest and American money in the last quarter of the nineteenth century.  American painters hoping to sell their art imitated these popular European styles and techniques.  John Coggeshall was strongly influenced by William Phelps, whose European training favored the tonal quality of the Barbizon School combined with the looser paint handling characteristic of the Munich School.  The paintings were representational, and Coggeshall, like most American painters of this period, preferred marine and landscape subjects over the historical and genre themes of his European counterparts.

Coggeshall's palette became brighter as he was exposed to artists who returned from European studies, but he never wholeheartedly embraced impressionism.  He was most representative of those American painters who straddled the middle ground between the Hudson River School and

American Impressionism.  He emphasized form and persisted with "quiet observation of fact" typical of much American painting in the last quarter of the nineteenth century.  Although Coggeshall's interest in light atmosphere increased, his work is suffused with that very American reverence for the forms of nature born of nineteenth century philosophy and the Luminist and Hudson River painting movements.

By the turn of the century urban scenes were finally considered worthy subject matter by artists, and Coggeshall began to portray them in his work.  In 1913 he completed a commission for the Lowell Sun, Cause and Effect, two twelve-foot long paintings depicting the Pawtucket Dam and the "mile of mills."  Painting industrial subjects probably came easily to this artist who had spent years creating engravings of Lowell factories, and who had a photographer's and printer's interest in technology.

John Coggeshall frequently sketched outdoors in pencil and watercolor.  He often went with William Phelps to areas around Lowell and to the Monadnock region of New Hampshire.  During the summer he did much of his creative work on the ocean near Boston Harbor and later, in Gloucester.  One Lowell critic felt that Coggeshall succeeded best "in the strong light of day and in the open spaces of sea..."

Coggeshall exhibited widely during his lifetime, primarily in Lowell and Boston.  An invitation from one of his summer school students also resulted in exhibits in the mid-west.  The artist was prolific and sold much of his work but unfortunately the whereabouts of the majority of his painting is unknown.  By today's standards, the prices received by the artist seem low.  In 1901 several oil paintings sold for between $50 and $75 each, and watercolors, for $5 to $7 apiece. 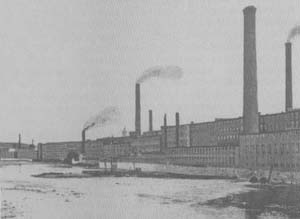 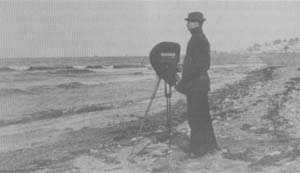 Coggeshall with camera on tripod

Photography
John Coggeshall used photography in a variety of ways.  Many of his photographs, including city scenes, churches, group portraits, and interiors, are documents of the life around him.  He also used photographs to help with detail in his painting and sometimes created an entire painting from a photograph.  During his lifetime, photography was elevated to the status of art, and many of his pictures evidence his intense interest in this new art form.  Among the hundreds of glass plate negatives, some are studies for paintings while others record the people and places of his world,  but many are simply  beautiful pictures.

Engraving
Coggeshall practiced engraving during America's heyday of illustration.  His engraving business, first with James Rice and later, Joseph Piper, produced advertising and logos for many businesses in Lowell and elsewhere.  The heading for the first issue of the Lowell Sun was printed from a Coggeshall 1878 engraving.  Among Coggeshall's photographs are many taken for E.B. Conant, a Lowell auctioneer of industrial buildings.  Coggeshall made engravings from photographs  to illustrate catalogs of the buildings offered for dale by Mr. Conant.

In addition to being an expert painter, photographer and engraver, Coggeshall was a loving husband, father and grandfather. He ran an engraving business and summer art school.  He also found time to write poetry and essays, to charter and lead a boy scout troop, join the state militia and the Sons of the American Revolution, and be a member of the Kirk Street Congregational Church.

John Ingersoll Coggeshall was indeed "a man of strong light...and...open spaces."  These were the environments in which he chose to paint, photograph and spend time. Like many artists of his era, he welcomed the new engraving and photographic technologies engendered by an unstoppable industrial progress even as he depicted the wide American landscapes being lost to it.