Lowell: Then and Now

FRAME 1
PARADISE DINER 112 Bridge Street
The land on which this diner sits once sloped down to the Eastern Canal.  In 1926, the south wall of the canal was raised, creating a level plot of land.  The Paradise Diner was constructed here by 1936, taking advatange of the site's frontage on busy Bridge Street.  The diner was one of many that could be found in Lowell in the early 20th century.  Usually open 24 hours, diners were often located adjacent to the mills to serve the workers whose shifts ran around the clock

By 1939, a stone-faced, concrete-block kitchen had been added to the Paradise Diner.  The diner displayed several features common to most diners - Old English car lettering, coach lamp light fixtures, and a neon sign.

By the late 1980s, the diner was rapidly deteriorating.  The paint that covered the original sheet metal paneling was badly peeling.  Around the diner, rehabilitation work, such as that at the Boott Mills and the Massachusetts Mills, was taking place.

In 1990, the exterior of the diner was rehabilitated.  The trim, paneling, doors, and windows were repaired and repainted.  New roof signs were added, and the car body was relettered in a type style similar to the original.

FRAME 2
HOWE BUILDING 11 Kearney Square
The site of the Howe Building was once occupied by small wooden structures and was part of a residential zone that existed between the city's business district and the mills.  By the 1890s, development pressures led to the commercialization and industrialization of this zone.  John and Henry Howe erected the Howe building on the site in 1894.

The curved corner of this red brick building was a common feature on Merrimack Street's non-square corners.  The building's terra cotta panels and granite banding continue around the corner, creating a flow that links one street facade to the next.

FRAME 3
COLONIAL BUILDING 24 - 28 Merrimack Street
The first structure to occupy this site at the corner of Merrimack and Central Streets was the Third Universalist Church, constructed in 1843.  The first floor of this Greek Revival structure that faced onto Merrimack Street was occupied by stores.  By 1865, the church had been expanded and converted into Barristers' Hall, a four story office building for lawyers. The building was destroyed by fire in 1905.

After the fire at Barristers' Hall, the building's owner, a clothing merchant named Joseph A. Chalifoux, erected the site's third structure - the Colonial Building.  Chalifoux was a clothing merchant who earned $5 a week before opening his own Merrimack Street store.  Although Chalifoux constructed this five-story corner structure as a department store, he did not move his own business to this location.  Instead, he leased it to a five-and-ten cent store.  His son moved the business to this site three years after Chalifoux's death.

Over the years, the facade of the Colonial Building underwent at least two remodelings, during which the first floor entrance was moved from the comer to the Merrimack Street facade and aluminum storefronts were added.  In a 1991 rehabilitation, the entrance was returned to the corner and the storefronts were replaced with more historically compatible wooden ones.

The right section of the building was constructed around 1874.  It housed a confectionery and a restaurant before it became the Railroad National Bank in 1896.  While the bank added a fifth floor and remodeled the facade, the upper stories of the bank portion remained different from the rest of the structure.

When the Jordan Marsh department store moved to the building in 1976, the facades and window glass of all three sections were painted white and a sidewalk canopy was built along the entire Merrimack Street side of the building.  In 1986, both the paint and the canopy were removed, revealing the earlier architecture beneath.

FRAME 4,
Photographs C & D THOMPSON BUILDING 133 -137 Merrimack Street
This two-story brick structure was constructed as a commercial building sometime between 1851 and 1860.  City directories reveal that it housed a variety of entrepreneurs, including a house painter and paper hanger, a confectioner, a milliner, a book seller, and a photographer.

There were originally five windows on the second floor of this building.  When the building underwent modernization, these window openings were altered and later bricked in.  Other changes included the painting of the red brick facade white, and the installation of plate glass and aluminum storefronts.

Much of the historical character of the building was regained in a sensitive 1991 remodeling of the facade.  The paint was stripped from the red brick and new wooden windows were placed in the unblocked upper-floor openings.  At the street level, new wooden storefronts replaced earlier incompatible remodelings.

FRAME 5
WENTWORTH BUILDING 256 Merrimack Street
This site was acquired in 1844 from the Proprietors of Locks and Canals by Tappan Wentworth.  The construction of the Wentworth Building was completed by 1845.  The upper floors of the building held a public meeting hall where recitals and lectures took place, while the ground floor was occupied by a clothing store.  When Wentworth died in 1875, he willed the building to Dartmouth College, which owned the building until 1918.  The building changed hands frequently after it was sold by the college.  By 1980, the ground floor was vacant while the upper floors were occupied by boarders.

The Wentworth Building has the same rounded corner that appears on many other 19th century downtown buildings.  The cast-iron column that stands in the comer entryway is an interesting early feature.

The building was sold by the Massachusetts Mills in the late 19th century, when the mill owned boardinghouse system was being dismantled.  The ground floor was quickly remodeled into storefronts due to the building's proximity to the central business district.  The building became increasingly run-down over the years and was largely vacant by the early 1980s.

In 1986, the building was completely rehabilitated and the exterior was restored to nearly its original appearance.  All the storefronts were removed and the brick with granite trimmed walls were reconstructed.  Doors, windows and roof restoration in the original materials and appearance completed the transformation.

FRAME 6, Photographs C & D WELLES BUILDING 175 Merrimack Street
In 1824, a small one-story building that housed a book and stationery store and a bindery was constructed on this site.  The site had been acquired from the Proprietors of Locks and Canals, owners of several Merrimack Street properties.  Whenever one of these properties was sold, the deed contained a clause that any building of twelve feet or more was to be constructed of brick or stone.

The Welles Building was constructed in 1846 as a commercial and office building. The structure's most significant feature was the public hall located on the third floor.  By the early 20th century, the need for public meeting spaces was being met elsewhere in the city. The high-ceilinged room served as a hall for a labor union for a time, but later a fourth floor was added inside its walls.

FRAME 7
HILDRETH BUILDING 33 - 53 Merrimack Street
A portion of the large site on which the Hildreth building now sits was first occupied by the First Freewill Baptist Church, which was constructed in 1837. The church sold the structure to the Lowell Museum in 1846.  The museum staged plays in the former church, which was distasteful to many of Lowell's citizens.  Apparently not all resident shared this view -2,200 of them signed a petition to have the Museum's license renewed after if was revoked in 1847.

The structure was plagued by fires which struck in 1850, 1853, and 1855.  After the 1855 fire, the structure housed a lecture hall, offices, and a post office.  A fourth fire in 1865 was severe enough to require extensive reconstruction.  The resulting five-story building was later torn down to make way for the Hildreth Building.

The Hildreth Building was constructed in two stages.  The right half was finished in 1882 and the left in 1884.  An  early tenant was S & H Knox and Company, a chain store similar to the Woolworth's which is located there today.  The building was named for Fisher A. Hildreth, a newspaper publisher, high sheriff, and postmaster of Lowell. Built by architects Van Brunt and Howe, the building was Lowell's grandest 19th century structure.

By 1980, the first floor of the structure was modernized with plate glass, aluminum frame windows, and enameled metal paneling.  Some of the original character of this prominent building was returned in a 1983 storefront reconstruction based on the Van Brunt and Howe design.

FRAME 8
BOOTT MILLS BOARDINGHOUSE NO. 7 and BOARDING HOUSE PARK 40 French Street
Most of Lowell's textile corporations built and operated boardinghouses for their employees.  The Lowell boardinghouse system became world famous.  In the late 1830s, eight Boott Mills boardinghouse blocks were built at the same time as the corporation's first mills.

By the 1920s, four of the five surviving boardinghouse rows were still being operated as private lodging houses.  The fifth building, which can be seen in the distance in the early photograph, had been severely altered and converted to industrial use.

Around 1950, the four relatively intact boardinghouse blocks were demolished and paved over for parking.  Only the forlorn remnant of the original boardinghouse block No. 7 remained.  With its gable roof and chimneys gone and windows blocked up, it was virtually unrecognizable.

During the 1980s, the exterior of the sole surviving Boott Mills boardinghouse was reconstructed in order to exhibit the appearance of this important class of historic buildings of which few survive.  On the interior and in an addition behind it, a completely new facility, the Mogan Cultural Center, houses a historical library, an immigrant and mill girl exhibit, and a continuing education facility.  Immediately in front of the Cultural Center, on a former parking lot, Boarding House Park has been developed.  The park contains an outdoor amphitheater and pavilion for the performance of musical and stage events.

Today's Albion Block consists of two distinct sections.  The portion to the right was the original Albion Building, constructed in 1879 by an unknown builder.  In 1893, the building was acquired by a dry goods company which expanded it to the corner on the narrow lot created when Palmer Street was constructed in 1892.  After a fire in 1904, a new fourth floor was added to the original building using the roof line and cornice of the 1893 corner addition and uniting the two portions.

When the Singer Company moved into the building in 1960, an aluminum and plate glass storefront replaced the earlier wooden framed system and aluminum paneling covered the original cast-iron columns.

In a 1982 remodeling, all the aluminum coverings were removed, revealing the original cast iron columns, including the prominent circular one at the corner, and a new wooden storefront was installed.

FRAME 9,
Photographs C & D EXECUTIVE BUILDING 100 Merrimack Street
The Merrimack Street facade of this structure occupies the site of three narrow 19th century buildings.  The right two-thirds evolved into the 1923 Lincoln Building.  The left third was built on what was originally the entrance courtyard of the adjacent First Unitarian Church.  The Lincoln Building was unique in the city, being entirely clad in copper.  The "courtyard" portion was built in the third quarter of the 19th century, probably as an enlargement of the Lincoln Building.  In the 1940s, the Lincoln Stores expanded into the building to the left and a remodeling of the storefront level unified the two structures.

Around 1835, John Street was constructed to give access to the new Boott Cotton Mills located at its foot.  The Nesmith Block was built on the northeast corner shortly after by John and Thomas Nesmith.  Over the next 75 years, the original building was remodeled several times.  The second- floor windows on Merrimack Street and at the corner were enlarged and a bay window was added on John Street.  The storefronts were successively remodeled and a large, second story signboard was added.  The basic form of the original building, however, remained through these changes.

The building underwent a major rehabilitation in 1981.  The interior was completely remodeled.  On the exterior, the paint was stripped from the facade and new windows matching the configuration of the earlier remodelings were installed.  New wooden storefronts completed the facelift. 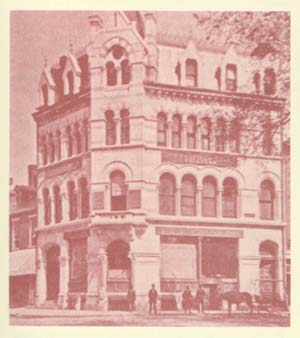 The Marble Bank Block was constructed in 1874 at the western corner of Merrimack and John Streets.