The International Institute of Lowell
Imagine finding yourself in a strange new place. You sold everything for a chance at a better life in a new country and all that you own is in the bags resting at your feet.  You are not familiar with the language, customs or laws.  What you wish for is a friendly face... a friend to help you get started.  For 75 years, the International Institute of Lowell has been that friend, helping immigrants adjust to life in their new home.

The driving force behind this movement was a young social welfare and settlement worker named
Edith Terry Bremer, who understood the needs of the immigrant.  Educated at the University of Chicago and a veteran of the Chicago Women's Trade Union League and the Immigrant Protective League, Bremer was recruited in 1909 by the National Board of the YWCA to direct the agency's work with immigrant women and girls.  She envisioned the International Institute as a service oriented agency designed to protect immigrant women, address their problems, and help with their adjustment to life in the United States. 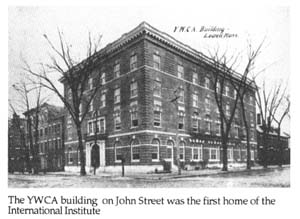 Bremer believed that this new program should recognize the importance of the immigrant community in the life of the immigrant girl.  She cautioned against the dangers of isolating the individual from the community and of straining relations between the generations.  "The community," wrote Bremer, "must be understood, sympathized with, and dealt with as a part of treating the individual."

Bremer understood that individuals rooted in the cultures and languages of the immigrants would be the most trusted and effective.  For this reason, she advocated that the workers be recruited and, if necessary, trained from those communities being served.  These workers became known as "nationality secretaries.

Because of its YWCA sponsorship, Bremer felt that the Institute should provide a complete program for the immigrant girl by offering not only English classes, but all the activities of a regular local YWCA, adapted to the needs and interests of the foreign born.  By the time of the first World War, this "experiment" had become an integral part of the YWCA and spread to other cities across the United States where major immigrant populations resided.

As early as 1914, the Extension Committee of the Lowell YWCA began working with immigrant women by concentrating on recruiting new members from those working at the local textile mills.  The goal was to reinforce Protestant principles for Protestant women and to convert others.  The mill agents, for their part, felt that this work was beneficial to their interests.  Their belief was that if the immigrant was involved with the YWCA, she was less likely to be a problem and therefore would be a better worker.  With the mill agents' permission, the YWCA was allowed to conduct English classes during lunch time, organize clubs, hold meetings and conduct periodic lectures.  These activities proved somewhat successful in drawing recruits to the YWCA.  Once at the YWCA, the new members could continue to learn English, study homemaking and citizenship, and receive help with health and personal hygiene.

In December of 1915, the Northeast Field Committee, a regional arm of the YWCA's national office, held a conference that recognized New England's unique situation. The committee found that New England, with its large immigrant population, needed to put special emphasis on recruiting and working with immigrant women
employed in the mills.

By the time of the first World War, about one million immigrants a year were coming through Ellis Island.  With the war there were new problems to be addressed.  Unfortunately, not all those who needed help would come forward to ask for it.  The issue of religious direction became a barrier in reaching those in need.  With the help of funds from the War Work Council of the YWCA, Lowell's chapter of the International Institute was officially created on May 1, 1918.

The Work
Until "suitable headquarters" could be found, the International Institute operated out of the YWCA building on John Street.  It also hired its first employees to work with Greek and Polish women.  Work started slowly.  According to the Greek worker's semi-monthly report, average attendance in the classes was on!y eighteen.

By September of 1918, the International Institute had moved its office to 25 Palmer Street.  At this new location, the Institute conducted cooking, sewing and canning classes along English and Americanization classes.  The regular casework of the Nationality Secretary included medical  employment and legal advice, as well as house calls and referrals. By the end of 1918, the number of nationalities reached by the International Institute rose to seven.

The Institute continued to grow after the war. In addition to the regular casework done by the Nationality Secretaries, the Institute conducted summer picnics, camping camping parties for girls, and an exhibition of handicrafts from many of the ethnic communities serviced.  In 1925, the International Institute held the first of its many festivals, the Homelands Exhibit and Festival, promoting the diverse ethnic culture that Lowell contained.

In the Annual Report of 1928, casework was divided into five categories:

It was also noted in that Report that the Institute was not an agency for relief.  Its mission was to cultivate cooperation with other agencies and act as a resource in directing individuals to the proper relief agency.  This report, though not intentionally, guided the International Institute's operations for the next sixty-five years.  The organization continued to provide referral services for the needy, conducted educational and citizenship classes, encouraged the formation of ethnic clubs, and worked toward obtaining citizenship for both women and men.

In the 1930s, funding for the Institute became harder to obtain because of economic conditions across the country.  In addition, where there was once great cooperation between the manufactures, the YWCA, and the International Institute, there was now animosity.  The YWCA had become more active in women's rights and issues over the years, and defended women in their struggle for better working conditions.  The manufacturers looked upon this as a threat to their interests and considered the YWCA a troublemaker.  The International Institute, as an arm of the YWCA, found that without the funding and cooperation of the manufacturers, their work was going to suffer. Also, because the mission of the Institute had broadened to include men, the International Institute became an independent organization in 1935.

As an independent agency, the International Institute continued to serve the immigrant population of Lowell as it had in the past.  It became the leader in promoting ethnic pride with cooking demonstrations in the 1940s and 1950s, and international folk festivals in the 1960s, 1970s, and 1980s. These years also brought to Lowell refugees, war brides, displaced persons and relatives of those already residing in the United States.  With each situation, the International Institute acted to assist immigrants with their problems.

Today, the International Institute remains an important part of an immigrant's life. In addition to translating documents and providing social service referrals, for many it is the first step in becoming an American citizen.  Throughout its 75 years the International Institute has never lost touch with its original mission: to be a friend to a stranger in this country. And, if each person in Lowell who was affected by the Institute could be counted, it would fill - a city. 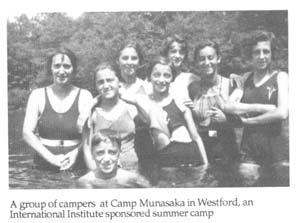 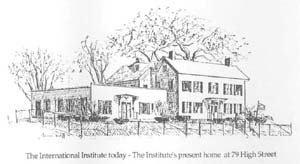