Prehistoric bedrock formations shape the topography of the land area we today call Lowell, Massachusetts. Less obvious is how these same formations shape our history and the patterns of our daily lives.  This exhibit illustrates some of the ways in which our relationship with the natural environment is reflected in our history, our economic vitality, and our overall quality of life.  Artists have looked to the Merrimack and Concord Rivers as sources of inspiration; entrepreneurs have drawn water from the falls for power; and citizens have gone to the rivers and parks for recreation and relaxation.  They are all responding to a natural environment created thousands of years ago. 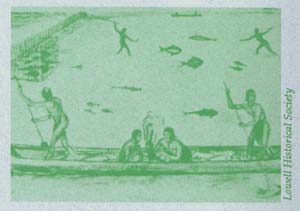 In preglacial times, more than 14,000 years ago, the Merrimack River flowed south to Boston Harbor. Today the commuter rail to Boston follows the flat topography overlying the original riverbed.  When the melting glacier deposited material in the channel of the preglacial Merrimack, the river changed direction.  It turned north from Lowell to flow into the Atlantic at Newburyport.  At the elbow of its northward turn, the river exposed the ancient bedrock and formed a waterfall.  Pennacook Indians called the place "pawtucket" - a place of loud noise.

The Pennacooks gathered at the Pawtucket Falls each spring to fish for migrating salmon, shad, an alewives.  Here the river's breadth narrowed, so weirs to trap fish were more easily constructed.  Fish were speared and netted in the shallow water near the riverbanks.

Early European settlers traded with the Pennacooks who gathered at Pawtucket, but they also found the river a valuable source of food and commerce.  Gradually, Europeans ,established permanent settlements at Billerica, Chelmsford, and Dracut.  As war and diseases decimated the Pennacook population, more Europeans settled in the river valley.  Farming was the dominant activity, but fishing provided a good, supplementary income.  A cart load of salmon caught in the Merrimack in 1779 could be sold in Boston for $200.

The rivers also powered grist mills, saw mills, and woolen mills.  The earliest of these were constructed on the Concord River, a river easier to control than the Merrimack.  Fishing and the operation of small mills were carried on side-by-side.

Dams that blocked the passage of fish were prohibited by early laws.  The dam at Pawtucket challenged these laws and created a conflict ,between fishermen and dam builders.  "The creation of a dam at the Pawtucket Falls will totally destroy the fish and deprive the people of taking near their doors the most delicate food and much of the real necessaries of life," State Senator William Hildreth of Dracut (a fisherman himself) told the Massachusetts General Court in 1801.  Nevertheless, wealthy, powerful merchants built larger dams to power more mills.  This led to direct confrontations between dam builders and fishermen.  Conflict erupted in 1825 when saboteurs attempted to tear down the Pawtucket Dam.  Kirk Boott advertised a $100 reward for information leading to their arrest.  It is thought that fishermen from Dracut were the perpetrators.

As the American economy blossomed in Lowell during the Industrial Revolution, the value of water for turning the spindles in the new textile mills far outweighed its value as a fish habitat.  In 1845, the 30-foot Great Stone Dam in Lawrence blocked the salmon's passage up the Merrimack River and prevented them from reaching the headwaters.  Unable to lay eggs in its spawning grounds, the Merrimack River Atlantic Salmon became extinct.

Industry also brought pollution.  More mills meant more people and more people meant more sewage. From the 1920's, when Lowell's population peaked at 113,000, until the construction of the Duck Island Sewage plant in the 1970's, Lowellians dumped 15 million gallons of raw sewage into the Concord and Merrimack every day.  No longer vital as sources of food, the Merrimack and Concord Rivers had become waste streams.  Water color was no longer determined by Mother Nature, but by the color of the cloth being dyed in the mill.

Population growth also consumed more and more land.  The pastoral setting in which the early mills were constructed lasted only a short period of time. Builders cut down the millyard's ornamental trees to clear the way for additional boarding houses.  Tenements that housed many of the immigrant workers were crowded along the banks of an expanding network of power canals.

Elected city leaders recognized this growing congestion as a problem.  "I fear that we are being hemmed in by brick and mortar shutting out the pure air of heaven," warned Mayor Elisha Huntington in his 1845 Mayoral address.  Under Huntington's leadership, the city actively sought and acquired land for parks.  In 1845 the city paid $30,000 for 30 acres of land creating the North and South Commons.  A Joint Standing Committee on the Commons was established.  Its intent was to keep the land open forever.  In fact the original deed for the North and South Commons specified that "no building shall ever be built" on the land. 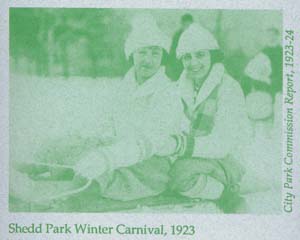 Private efforts have also contributed greatly to the city's need for green spaces.  In the 1850's the Northern Canal Walkway, offering a panoramic view of the Pawtucket Falls, was built by the Proprietors of Locks and Canals as a promenade for mill workers.  In, the late nineteenth and early twentieth centuries, when shorter working hours and more leisure time created a greater demand for parks, private citizens responded by donating large parcels of land to the city.  Rogers Fort Hill Park, Shedd Park, the Pawtucket Boulevard, Tyler Park, Sheehy Park, and Gage Field were all constructed on land donated to the city by prominent, civic-minded individuals.

Today the City of Lowell is itself designated as a National and State Park.  The ancient bedrock of the Pawtucket Falls, which once attracted Pennacook Indians to fish, now attracts visitors who come from throughout the world to see the mills and canals built as a result of the 30-foot drop.  Local parks, built to ease the congestion of a growing industrial city, are now focal points of neighborhood pride. 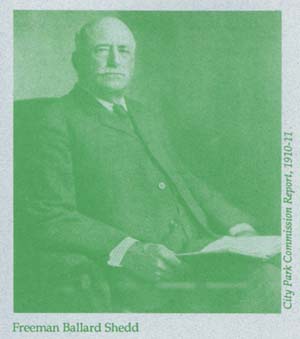 Sailing and rowing regattas on the Merrimack River and new recreational opportunities, such as white water rafting and kayaking on the Concord River, are growing in popularity because of improved water quality.  Fish restoration programs promise salmon fishing not possible since the 1800's.

As the need for urban land grows, however, parks and open spaces are increasingly threatened.  In the past three years, Lowell has lost more than 20 of its 350 acres of parkland.  Private efforts are again needed to help the city protect its parks and acquire more green space.  The days of Gage, Shedd, and Rogers may have passed, but private citizens still can help.  People can work together to protect the rich natural environment that has contributed so much to Lowell's history and make the city a good place to live and work.