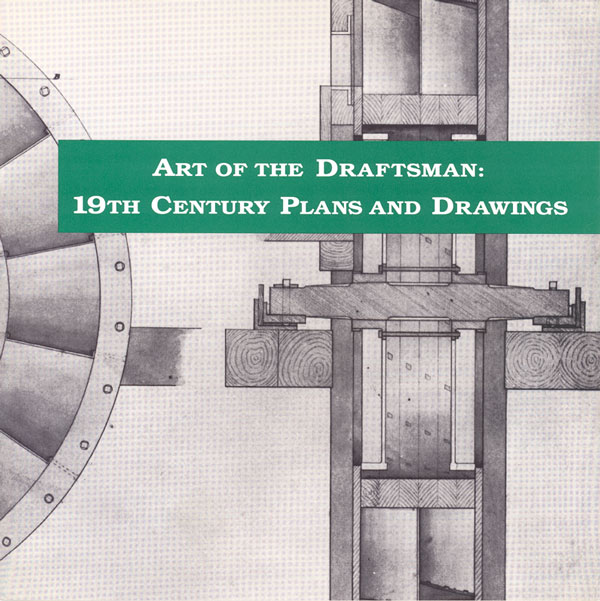 From our earliest beginnings we have been drawing: on cave walls, stone, papyrus, paper-virtually anything at hand-in an effort to convey information to one another. Drawing is a universal language because it communicates information faster and more clearly than the spoken word. This property of drawing is at the very foundation of engineering. Without it, it is hard to imagine that the technological advances of the nineteenth century could have occurred.

Prophets and Messengers
Proprietors of Locks and Canals on Merrimack River was reorganized in 1821 to build an industrial textile complex that became the city of Lowell. From 1825 to 1848, its engineering responsibilities included the design and construction of mills, canals, textile machinery, turbines and railroad locomotives. Throughout the nineteenth century this company experimented with mechanical and engineering designs, leading the nation in hydraulic engineering. The roles of the architect, designer, engineer, draftsman and contractor were often filled by a single man.

Most of the exhibit pieces are presentation drawings. Their high level of detail typifies drawings presented to clients for project approval. They were also used after project completion for publication, presentation at lectures, or as references for maintenance and modifications. By the mid-nineteenth century an entire typology of engineering drawings had evolved, ranging from small sketches scribbled on pieces of paper to elaborate and meticulously colored presentation drawings. Engineering drawings were, and are, relevant to the entire cycle of design, construction, and evaluation of a project.

But there is much more to these drawings than their practical applications. They are exciting because they are a medium for creation. They are about possibilities. They give form to uncertainties and struggle with what might be. They are prophets and messengers bearing tidings of new events and ideas. And they are very beautiful.

The Center of Victorian Industrial Enterprise
Engineering drawing separated trial and error from production. The drawing, not the product, was the medium for experimentation, and the engineer could make design changes as frequently as he liked. The drawings also provided a means of controlling production. They could not have existed without the Industrial Revolution and its division of labor. The ability to specify dimensions before manufacture meant that products could be divided into parts. Spreading the manufacture of the parts among workers or machines also meant speedier production.

"The techniques of engineering drawing made it possible for the engineer to create and organize a man-made world in unprecedented and Promethean ways, but they were also the means for controlling work and introducing factory discipline on a scale previously unknown. They were at the center of Victorian industrial enterprise." The Art of the Engineer.

The Power of Making Mechanical Drawings
The Renaissance understanding of perspective had yielded the concepts of plan, elevation and section which were integral parts of architectural rendering by the time modern engineering drawing appeared in the late eighteenth century. Technical drawings which described machinery had long existed but did not provide manufacturing clues. With the Industrial Revolution in Europe engineering drawing came into its own. Its emergence is credited to Matthew Boulton and James Watt of England who founded the first stationary steam engine factory in 1773, and needed a way to divide up the various parts of their production process.

Watt developed the simple and meticulously finished style found in engineering drawings until the mid-nineteeth century. The refined finish appears in both large presentation drawings and in ordinary working drawings. Until the appearance well into the nineteenth century of color engravings and chromolithography, drawings or prints of drawings were colored by hand.

The Lowell Draftsmen
In the early part of the nineteenth century most engineering drawings were produced by engineers or skilled mechanics. Men like James B. Francis and Kirk Boott often did their own drawing, despite their positions. Boott (1790-1837), agent of the Merrimack Manufacturing Company, received training in engineering and surveying while at military school. Francis (1815-1892) was the Chief Engineer for the Proprietors of Locks and Canals for more than forty years, and began his career as a surveyor with knowledge gained largely through experience. He oversaw most of the projects represented by the exhibit drawings.

By the middle of the century many men were trained strictly as draftsmen. Some had engineering or production skills, but many more were copyists. This was prior to the appearance of blue-prints, and engineering had expanded to the stage where copies of drawings were often necessary. Lowell was known for its large cadre of well trained delineators.

These drawings are an invaluable record of the staggering engineering achievements of nineteenth century Lowell. They document in a more direct and immediate way than written records can, a vitally important time in our nation's history. They are spare and graceful testimony to the development of a powerful industrial society.

Unity of Thought and Feeling
Engineering drawings are also works of art and artistic expressions of the draftsmen. Like a painter's brush strokes, the details of the drawings express personality, technical competence, the style of the era and the tenor of the age.

The drawings are engaging because, unlike their contemporary counterparts, they are not reduced to a system of lines and measurements. Many of the objects are shaded to give a sense of solidity. Yet, because they are isolated from their normal surroundings, they also seem to float, accompanied by their plans and sections, generating a simple, surreal power. They depict machines, parts of machines and structures simple enough to be explained with realism. Their aesthetic appeal is a function of their large scale and balanced coloring. Although these old objects appear clean-cut and precise, the artist often couldn't resist adding a man working at a desk or waves angrily roiling in the Merrimack River. These flashes of sentiment in relief of rational expression underline the fact that the unity of thought and feeling was not yet broken.

Engineering drawing was an expression of the ideals, interests and aesthetic sensibility of the late eighteenth and early nineteenth centuries. This close cultural connection explains the excellence of mechanical design between 1820 and 1850 and the compulsive perfection of many of the drawings that were produced. The drawings truly embody "the reconcilability of elegance of form with bare utility." The Art of the Engineer.

Proprietors of Locks and Canals
Engineers and managers realized the importance of engineering drawing and by the mid-nineteenth century forward-looking companies like The Proprietors of Locks and Canals were working to preserve their early drawings. In 1960 the company donated its engineering library, photographic collection and some drawings to Lowell Technological Institute, now the University of Massachusetts Lowell. They also placed a large portion of the company records and James B. Francis Papers with Baker Library at Harvard. In the 1980s, when the firm moved from the Boott Mills to the Boott Hydroelectric Plant, they gave the remaining drawings, machine models, photographs, and manuscript records to the new owners, Lowell National Historical Park.

The exhibit pieces were chosen from a total of approximately 8,000 architectural and engineering drawings. The majority of the pieces in the collections are working and presentation drawings from the nineteenth century. They include prints, pencil and ink drawings on paper and linen, many of which are colored. They document Lowell's major engineering endeavors, with projects involving turbines, canals and hydraulic engineering heavily represented. Most of the works are unsigned. However, a few are attributed to Lowell engineers and entrepreneurs James B. Francis, Kirk Boott, Patrick Tracy Jackson and Uriah A. Boyden.

We hope engineers, artists and other researchers will be excited by the rich and valuable resources available at the Center for Lowell History and the Lowell National Historical Park.