Profiles in Courage: African-Americans in Lowell

Although often ignored or unrecognized by both historians and the community-at-large, African-Americans played an important role in the history of Lowell, Massachusetts.  This exhibit of the events and experiences of two African-American families, the Quork-Lewis Family and the Lew Family, is an attempt to understand and appreciate their courage and contributions.

The Quork-Lewis Family (1754-1954)
Records of the Quork-Lewis Family experiences began with the sale of three slaves, Mingo, Dinah and their son, Quaco or Quork, to James Caldwell of Barre, Massachusetts, in 1754.  At Caldwell's death in 1763, Quork, his parents, and siblings were left to  Caldwell's widow, Isabell, who took them with her when she  married Nathaniel Jennison.  Jennison became sole owner of these slaves at Isabell's death in 1774.  In 1781, after two promises of freedom were broken, Quork ran away from Nathaniel Jennison to the brothers of his former owner.  When caught by Jennison, Quork was beaten and locked in a shed for several hours.  These actions became the basis for a lawsuit in which the Massachusetts Courts applied the new 1780 State Constitution with its claim of the "rights of man."  After a series of suits, counter suits and appeals, Quork's case was upheld in 1783 by the Massachusetts Supreme Judicial Court.  This case is now viewed as the landmark decision which effectively ended slavery in Massachusetts.

Among the slaves, owned by Nathaniel Jennison, was Quork's sister Minor Walker.  In 1792, she married Peter P. Lewis, also from Barre, and they moved to Cambridge.  There they purchased a home and raised a family of nine sons and two daughters.  Their sons and daughters became leaders in the anti-slavery movement centered in Boston.  About 1830, John and Sophia Lewis Levy, Walker Lewis, Simpson H. Lewis, Andrews V. Lewis, Samuel A. Lewis, Enoch Lewis, and Peter P Lewis, Jr. moved their families to Lowell.  Their reasons are not clear:  perhaps family ties, business expansion, anti-slavery activities, or better educational opportunities for their children.

John Levy, hairdresser, was an agent for the Massachusetts Anti-Slavery Society and a paid organizer for the Annual National Anti-Slavery Bazaar held in Boston.  In 1843, Levy worked with Maria Chapman and Sarah Clay to establish the Lowell Woman's Anti-Slavery Society and their anti-slavery fairs were held in Old City Hall.  In 1844, Levy, along with William Lloyd Garrison, Frederick Douglas, and others, helped organize a series of one hundred anti-slavery conventions throughout Massachusetts. 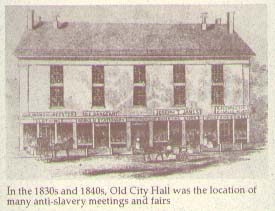 In 1825, Walker Lewis married Elizabeth Lovejoy, described as a light skinned mulatto, and they had two daughters and two sons.  In 1826, Lewis was a founding member of Boston's General Colored Association an organization formed "to promote the welfare of the race by working for the destruction of slavery."  By 1844, Lewis was one of very small number of Latter Day Saints (Mormon) "Elders" before a long-term Ban on Blacks in the Priesthood was implemented.

Walker Lewis' commitment to the anti-slavery movement was seen in the Nathaniel Booth Case.  In 1844, Booth, an escaping slave, settled in Lowell and opened a barbershop.  When the 1850 Federal Fugitive Slave Law superseded the 1843 Massachusetts Personal Liberty Law, “one or two slave catches” were seen in Lowell and Booth fled to Canada.  Shortly, he returned to live with the Walker Lewis family.  The Lowell Free Soilers Party also offered protection.  They publicly encouraged the escape slaves seeking freedom in Canada to return home to Lowell.  One member  expressing "a willingness to suffer death rather than let a fugitive slave be caught when it was within his power to prevent it."  In 1851, when slave catchers returned for Booth, Linus Child, Boott Mill agent, negotiated with the southern plantation owner and then raised money from the Lowell community to purchase Booth's freedom.  In 1855, the Massachusetts Legislature extended the Personal Liberty Law which practically nullified the 1850 Federal Fugitive Slave Law.  The South viewed this action as defiance of the Federal Constitution and the tension between the South and the North grew.

The families of John Levy, Walker Lewis, and Peter Lewis, Jr. became an integral part of Lowell.  They owned homes and businesses and were active in the educational, political, and religious life of this city.  When Walker Lewis died in 1856, Linus Child, Boott Mill agent, served as guardian for Walker Lewis, Jr.  In 1858, Walker Jr. reached majority age and Linus Child returned all the money Walker Lewis left for his son's care.

By 1853, Simpson H. Lewis was one of the "colored citizens" petitioning the State for the right of men of color to serve in the militia.  However, it was not until the Civil War, under "military necessity," that naval crews and regiments were opened to "colored recruits."  Perhaps their uncle's early fight explained why so many of the young Lewis men were among the first to enlist and serve aboard the USS Rhode Island with the 55th Colored Cavalry.

In the late 1800s, life became very hard for the families of Edward B. Lewis, Theodore W. Lewis, Levi Lewis and Walker Lewis, Jr.  Some injured in the Civil War suffered severe health conditions.  Others find their businesses as barbers slowed by competition from Irish and French-Canadian immigrants.  These health and financial difficulties forced them to seek Soldiers Relief from the Lowell Office of Veterans Affairs.  By the early 1900s, members of this generation were gone.  In 1954, Theodore W. Lewis, last daughter died and was buried in the family plot at  the Lowell Cemetery.

The Lew Family
The Lew Family story began with Primus of Groton, a former servant of Captain Jonathan Boyden and Margaret Lew, a former servant of Samuel Scripture.  As free blacks, Primus and Margret Lew married in 1742 and they had two sons and two daughters.  Primus served as a musician in the 1747 French and Indian War.  In 1752, Primus married again, Rose Canterbury.  They bought a farm on the west side of the Nashua River in the Pepperell section of Groton and had two children.  Even in the early 1900s, this section of Pepperell was called Primus Hill and the nearby depot of the Fitchburg Railroad Branch Line was called Primus Station.

Primus and Margret's oldest child, Barzillai Lew (pronounced BAR-zeal-ya) often called "Zeal" or "Zelah," was born November 5, 1743.  He was described as "big and strong with an extraordinary talent as a musician."  He was a member of the English forces in the 1760 war against the French and Indians.  About 1767, he bought Dinah Bowman's freedom for $400 and married her.  Early in the American Revolution, his skills and talents were called upon again and he served with Captain John Ford at the Battle of Bunker Hill on June 17, 1775 as a fifer.  On Barzillai Lew's return to Chelmsford, MA, he joined Joseph Bradley Varnum's Militia from Dracut, MA.  In September 1777, they were sent to Fort Ticondaroga to engage Burgoyne's Army.  Jonathan Varnum, Joseph B. Varnum's son, wrote in his diary on November 1, 1777, "Zeal" is selected as a fifer and fiddler for the grand appearance the day that Burgoyne's Famous Army is to be brought in.  A Wonderful Show ..."

With wages from his military service, Barzillai and Dinah purchased a large tract of farmland on the far side of the Merrimack River.  They built a house near Varnum Avenue and Totman Road, then called Zeal Road, named after Barzillai.  As active members of the community, they were members and musicians at the Pawtucket Society Church on Mammoth Road.   In 1832, this church organized the first anti-slavery meeting for the Greater Lowell area. 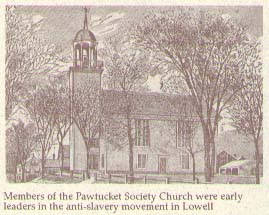 Barzillai and Dinah had thirteen children.  Some worked on the Middlesex Canal, some farmed in Pawtucketville, while others moved to Andover, Boston, and Charlestown.  The Lew Family was noted throughout the 19th and 20th centuries as well educated, skilled, and talented musicians.  It was said that "no family in Middlesex County from Lowell to Cambridge could produce so much good music."

After his death in 1822, Barzillai Lew's Pawtucketville farm went to his sons, Zadock and Zimri.  Zadock, a well-known musician, died in 1826 without a will and his property was sold at auction.  Zimri died in 1847 in a tragic train accident in Lowell on Fast Day. 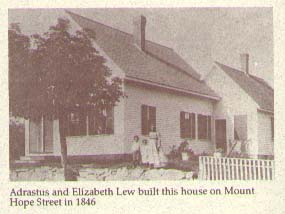 A few year earlier in 1844, Adrastus Lew, Zimri's son, married Elizabeth Freeman of Derry, New Hampshire.  They purchased and cleared a piece of woodland off Riverside Street in the Pawtucketville section of Dracut (now Lowell) and built a house which still stands on Mount Hope Street.  In 1912, at the age of 91, Elizabeth Freeman Lew recounted in an interview with the Lowell Sun:

Adrastus and Elizabeth had five sons and one daughter.  James, moved to Cambridge, formed a popular dance band, and served as the music advisor to the Cambridge School Committee.  William and Fred opened a successful dry-cleaning and dyeing business in Lowell.

In 1874, William married Isabell Delaney of Virginia and raised four children - Harry, Theresa, Marion, and Girard.  After graduating from Pawtucket Junior High School, Harry Lew entered the family dry-cleaning business.  He was recruited by the Pawtucketville Athletic Club of the New England Professional Basketball League and was the first to integrate professional basketball in 1902.  Theresa Lew graduated from Lowell High School and was Class
Salutatorian in 1912.  After finishing Lowell Normal School, she taught at the Bartlett School for 25 years.  Marion Lew graduated from Lowell High School and the Lowell Normal School music program.  She then taught piano to generations of Lowell children.  Girard Lew, an outstanding athlete, graduated from Lowell High School and the University of Massachusetts Amherst.  He became an educator and trainer, first in the South and eventually he worked in Chicago.  He was interviewed by the Lowell Sunday-Telegram in June 1913, about his experiences teaching in a poor, rural, segregated school in Gloucester County, Virginia.

It is through understanding such events and experiences of the past that we, as individuals, as a community, and as a society that we can appreciate and respect one another, now and in the future. 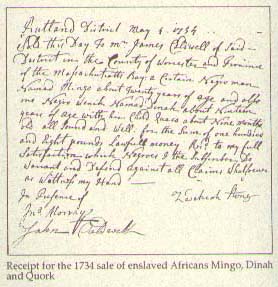