Lowell History: We the Portuguese

Click the image above to view the full flyer

Global Travel, a Portuguese Tradition
Throughout history the Portuguese have been reknown sea explorers and discoverers of distant lands.  Thus, it seems only natural that so many Portuguese over the past 150 years have made the long journey from their homeland to United States shores.  During the fifteenth century, Portugal's famous Prince Henry the Navigator encouraged his people to embark on ocean voyages of such magnitude that the realms of navigation, geography, cartography, and mathematics were forever changed.  For the next century Portugal controlled the largest empire in the known world.  The spectacular exploits of Portuguese explorers have been extensively documented.  Navigators Bartholorneu Diaz de Novaes and Vasco da Gama among others, sailed the African Coast, rounded the Cape of Good Hope, the Malabar Coast of India, Malacca, Macao, and Japan, in search of new trade routes.  Pedro Alvares Cabral landed on the Coast of Brazil in the year 1500 and established what would become Portugal's largest colony.  Others included (Coastal Africa) Angola, Mozambique, Portuguese Guinea, San Tome e Principe, and the Cape Verde Islands; (India) New Goa and the associated Diu, Damoa; (China) Macao, and Western Timor.

Although the Portuguese Revolution of 1974 led to the independence of all that nation's colonies, including the Cape Verde Islands by 1976, the country still consists of Continental Portugal and the two Atlantic Ocean archipelagos, the Azores and the Madeiras. Discovered during the height of Portuguese exploration, Madeira in 1418 and the Azores, between 1420 and 1452, neither of these volcanic island chains was populated. This enabled Portugal to adopt them as native lands by encouraging migration and settlement.

The closest of the nine mid-Atlantic Azore Islands is Santa Maria, 758.0 nautical miles (nm) from Lisbon, Portugal's continental capital. The furthest of the islands is Flores, some 1026.7 nm from the mainland. The remaining islands in the chain are Corvo, Graciosa, Sao Jorge, Fayal, Pico, Terceira, Sao Miguel and the tiny, uninhabited Formigas. Towards the Coast of Africa lie the rugged Madeiras with two inhabited islands, Porto Santo and the more heavily populated Madeira. The rocky Desertas remains uninhabited.

History of Portuguese Immigration to Lowell
Although persons of Portuguese ancestry have come to Lowell from Continental Portugal, Cape Verde Islands, Angola, and Brazil, the majority of Portuguese immigrants to Greater Lowell are from Madeira and the Azores, with an especially large concentration from the island of Graciosa. These island chains are referred to as Insular Portugal because residents of these islands live somewhat in isolation, insulated to a degree from the rest of their country and the world.

When recounting the history of Portuguese immigration to the United States, specifically the Lowell area, there were two definitive waves of mass immigration which occurred for distinctly different reasons. The first instance of a large migration of Portuguese to this area began during the late 1800s. To understand the reasons they came, it is necessary to know something about the lives of these people in their homeland.  The Azores and Madeiras possess delightful semi-tropical climates suitable for fishing and farming.  Yet opportunities for economic improvement were extremely limited. The need to better their impoverished circumstances, coupled with compulsory military service and that historical "spirit of adventure" gave the Portuguese the impetus required to emigrate.

Throughout the years, most immigrants of Portuguese ancestry have settled either in New England, Southern California, or Hawaii, with New England, the dominant choice. Of the official total of 241,916 Portuguese immigrants admitted to the United States during the first wave of mass immigration between 1820 and 1921, more than 75% remained in New England, the majority settling right here in Massachusetts, with smaller numbers in Rhode Island and Connecticut. The largest Portuguese settlement in Massachusetts was established in the Fall River/New Bedford area, with other significant settlements in Boston and Cambridge, Gloucester, Provincetown, Ludlow, and of course, here in Lowell. 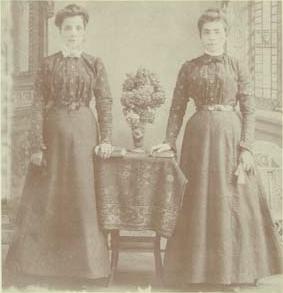 The Early Immigrants
The first permanent Portuguese settlement in Lowell can be traced back to the year 1851. Although initially many Portuguese settlers were introduced to the New England seacoast through the New Bedford whaling industry in which they played such a substantial role, many were eventually drawn to the booming industrial city of Lowell to gain more secure employment, leaving the old ways of the sea behind.

Although immigration to the U. S. held prospects of greater opportunities, the early settlers faced many obstacles. The first of these difficulties was surely the ocean voyage which stretched over more than a week, in dismal, cramped conditions and often included sleeping on damp decks, huddled together in groups. Coming from the warmth of their island homes to the frigid expanses of the unfamiliar New England territory was an immense cultural shock. Unable to speak the language or understand the customs, they tended to form tight-knit communities in which they could continue some traditions from home.

The call of the industrial age brought Portuguese immigrants to Lowell. Hard work was a hallmark of these people and soon, men, women, and children were assimilated into the mill system. In many instances, both husband and wife worked in the mills, with children entering around the age of twelve. Sometimes men would preceed their families, saving money with which to bring them to this country. Young people often joined their relatives in sending money back to Portugal to support family members left behind. Portuguese laborers worked in most of Lowell's mills, such as the Boott Cotton Mill, the Massachusetts Mills, the Appleton and the Hamilton. Struggling through ten hour days, six days a week, may not seem advantageous to us today, but at that time, Portuguese immigrants likely viewed this as a significant opportunity to better their circumstances. At one time, so many male immigrants from Madeira worked at the Tremont Mills and lived in boardinghouses on that street they became known as "Treemonts. "

Lowell's Portuguese immigration came to a virtual standstill from 1922 through the late 1950s when restrictive nationality quotas and stringent literacy laws were enacted. Although Portuguese immigrants had a reputation for hard work and often furthered their schooling once in this country, educational opportunities were minimal, particularly on the Azores and Madeira, and most immigrants from there found it difficult to pass the more stringent literacy requirements then in effect. 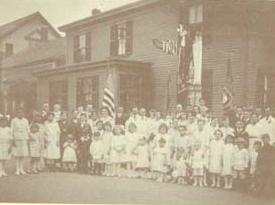 (Donated by the Ferreira Family)

Later Portuguese Immigrants
By the time the second wave of mass immigration from Portugal began, those immigrants who had previously arrived were an integral part of Lowell's multi-ethnic mix, creating a cultural support system comprised of a devout religious community, the neighborhood, Portuguese social clubs, and a substantial number of businesses.  Many Portuguese had friends and family living in the United States by this time and had heard stories of educational and industrial opportunities unavailable to them at home, especially in the Azores.  Yet immigration laws continued to be extremely restrictive until such time as nature took control of the situation.

Despite the fact that the Azores and Madeira were originally developed due to volcanic and seismic activitity, it had been a considerable amount of time since there had been a catastrophic event. One of the last recorded cases of extreme seismic activity took place in the Azores in 1522, when a hilltop convent in Ponta Delgada, the capitol of Sao Miguel, was swallowed up during a disastrous earthquake, killing 209 nuns.  However, that historic incident pales in comparison to the Azore earthquakes of 1957 and 1958.  In September of 1957, an immense submarine volcano erupted off the western end of the small but densely populated island of Fayal, causing massive flooding and temporarily giving birth to an entirely new island.  Minor earthquakes there continued to terrorize the people for a year following the initial eruption.  This came after several lesser earthquakes had already devastated the islands of Terceira and Sao Miguel in the early 1950s.  Then in February of 1964, another serious earthquake rocked the island of Sao Jorge leaving 25,000 residents homeless.

These occurrences were the catalyst for the next wave of Portuguese immigration.  Due to the influence of Portuguese groups within their constituencies, Senators John Pastore of Rhode Island and John F. Kennedy of Massachusetts co-sponsored a congressional bill in 1958, referred to as the Azorean Refugee Act, which permitted the issuance of extra visas to accommodate recent earthquake victims.  After the 1964 Sao Jorge earthquake, Senator Edward M. Kennedy joined the cause of Azorean relief advocated by his late brother.  In 1965 the New Immigration and Nationality Act came into effect, eliminating the quota system that had stemmed the flow of Portuguese immigration for so long.

Lowell's Portuguese Community
Throughout the years, Portuguese settling in this area have built a strong, steadfast community.  At the beginning, as was true with most early immigrants, those coming to work in the mills stayed at local boarding houses.  About 1862, the first of the "Portuguese" boarding houses were established. Casas de borde, as they were called, were numerous by the turn of the century with at least ten set up along back Central, Charles, Chapel, Union, Cherry,  North, and other neighboring streets.

As time went on, despite strict disciplinary rules, these casas de borde became one of the main places where young single people made acquaintances. Many would eventually marry and make their permanent residences in the same areas that the boarding houses had occupied. The neighborhood between Lawrence and Gorham Streets has become the nucleus of the Portuguese community past and present. Throughout the years, the Portuguese residents have diligently fixed their homes, planted colorful gardens reminiscent of the old country, and carried on cultural traditions that continue to give the city of Lowell its splendid ethnic diversity.

One of the first orders of business was to introduce a place of worship in their new city. Generally strong in their Catholic faith, the Portuguese immigrants wished to establish a church in which they could understand the language and experience religious customs particular to their own heritage.  Therefore, in 1901 the parish community of Saint Anthony's Church was established. At first it was necessary to meet in the Hall of St. Peter's Parish, but by May of that year, a small, white wooden structure on the corner of Gorham and Congress Streets was purchased from the Primitive Methodists.  In 1908, construction began on a new structure on back Central Street which could accommodate the growing congregation. After more than 90 years as a parish community, St. Anthony's Church still remains the focal point of the Portuguese neighborhood, continuing colorful traditional feasts and religious celebrations.