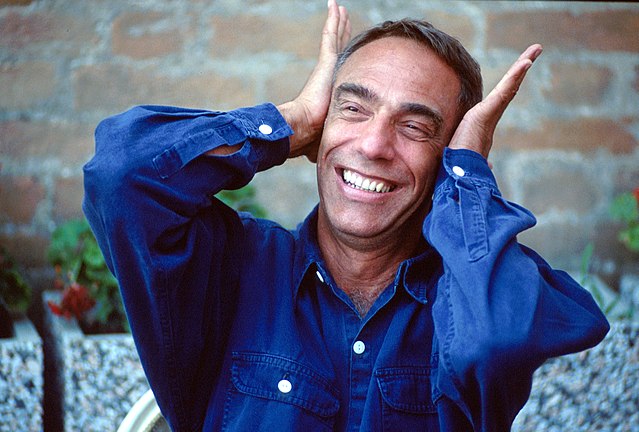 The British movie director and writer Derek Jarman died of AIDs in 1992 at age 52. His significant artistic achievement was curtailed by this early death, and the loss is incalculable.

Blue was Jarman's last film, released shortly before his death. As his health deteriorated, Jarman lost his sight, finally experiencing only blue in his visual field. Consisting of a single image of blue with a sound track, the film is a sustained reflection on Jarman's life and vision.

The engagement with the color blue was rooted in an interest in the work of conceptual and performance artist Yves Klein, whose name is associated with a shade of ultramarine blue called International Klein Blue. The pigment is mixed with a synthetic resin medium which results in a brilliant, matte version of the color.

The Blue soundtrack consists of voiceovers by Jarman and his collaborators, as well as music.

Blue premiered on 19 September 1993, Channel 4 and BBC Radio 3 produced a simultaneous broadcast to create a stereo soundtrack. Radio 3 subsequently broadcast the soundtrack separately as a radio play and it was later released as a CD.

HIV/AIDs afflicts the lives of people every day. There were approximately 36.9 million people worldwide living with HIV/AIDS in 2017. Of these, 1.8 million were children, less that fifteen years old; The United Nations has included Good Health and Well-being in it's Sustainability Goals, (Goal #3)

In 2017 more than two-thirds of the total infected worldwide – some 35 million people – were Africans, of whom 15 million have already died. Sub-Saharan Africa alone accounted for an estimated 69 percent of all people living with HIV and 70 percent of all AIDS deaths in 2011.

In the countries of sub-Saharan Africa most affected, AIDS has raised death rates and lowered life expectancy among adults between the ages of 20 and 49 by about twenty years.

All these might echo the soundtrack of Blue and say, "What need of so much news from abroad when all that concerns either life or death is all transacting and at work within me?"