The last quarter of the 19th century was a period of great progress in the United States; a time when vast wealth was accumulated and often flaunted.  It was also a period when the various architectural styles that we commonly refer to as Victorian reached their heights.  Before the advent of the automobile, one's own home was the focal point of most family activity. Our Victorian forebearers often enjoyed showing off financial successes in their houses.

The two most common extravagances of Lowell's Victorians in decorating their homes were ornamental "gingerbread" and fancy glass.  Kaleidoscopes of fancy glass can be found from the Belvidere mansions to the workmen's housing in the Acre neighborhood.

Lowell was a prosperous and expanding city at this time.  Many houses built in the new subdivisions between 1880 and 1920, featured these ornamental glass windows.  Some are readily visible from the street, but many of the finest examples are in locations where the rainbow of colors can be enjoyed only from inside the house.  However, the careful observer will discover that many Lowell homes have ornamental window borders, side panels, or transoms that may include beveled, stained, jeweled, etched, and sand-blasted glass.

The exhibit STREET TREATS AND HIDDEN TREASURES: LOWELL'S RESIDENTIAL FANCY GLASS shows some examples of Lowell's wealth of stained glass.  The visitor may have passed these same houses many times, without truly seeing them before.

This exhibit primarily shows you "street treats" that you may drive by and enjoy at your leisure.  It also offers a peek inside some of Lowell's homes.  The city has an extremely large concentration of fancy glass because so many of its fine building stock was erected at the time when residential decorative art glass was extremely popular.  Lowell's major role and financial success in the early decades of the Industrial Revolution is reflected in this art form.  With the decline in Lowell's fortunes and the eventual relocation South of most of the textile mills, it was not financially possible for people to "modernize" their homes.  This period of decline is what actually helped preserve so many of these windows in Lowell.  When stained glass went out of fashion, people who lived in more affluent communities removed their examples.  Remodeling and updating their domiciles was a luxury that few Lowellians could then afford.  Thus, Lowell's economic depression reaped aesthetic benefits, with fancy glass and other architectural delights that have survived and been preserved.

TRADITIONS AND TECHNIQUES OF STAINED GLASS
The fancy glass found in American homes has its roots in European cathedrals.  The European stained glass tradition dates from about 1000 A.D.  Glass was crafted by hand in a limited range of primary colors.  Crude fabrication caused blemishes and irregularities that actually enhanced light refraction.  Mouth-blown glass, called "pot metal," is still made today and known as "antique" glass.  The colors are crisp and the surface hard and bright.

Medieval glass artisans discovered that silver nitrate could embellish their work.  This "silver stain" is applied as an opaque liquid but becomes yellow-orange when fired.  Like vitreous oxides, silver stain fuses to the surface of the glass and is not absorbed.  It is from this decorative technique that the term "stained glass" evolved.  By the 1600s, glass artists also used bright, multi-colored enamel paints.  In the early 1800s mosaic windows were superceded by large pictorial compositions done on single sheets of glass.

Colored glass is painstakingly cut into small pieces and arranged into mosaic patterns on top of a full size charcoal drawing or "cartoon."  The small glass pieces are then fired in a kiln so that the vitreous paints became permanently fused to the surface.  Next, the mosaic is "leaded up" by setting the glass within a network of lead strips called "cames" which are then soldered together.

DECORATIVE TRADITIONS IN AMERICAN ARCHITECTURAL GLASS
In the 17th century, as America was being colonized Europe was undergoing political and religious
turmoil.  European stained glass art was also in steep decline.  Thus, as new settlers arrived in America, many of whom brought strong religious faiths and traditions, they did not bring along any desire for ecclesiastical decoration. The Puritans who settled Massachusetts Bay Colony in the 1630's were particularly averse to any embellishment in their Meeting Houses.  Such decoration was a reminder to them of Roman Catholicism or of the Anglican cathedrals that represented the hierarchical faiths from which they had fled. 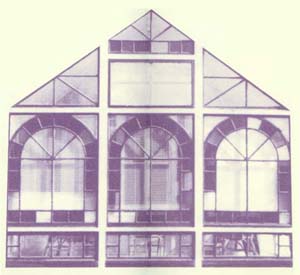 Even though the colonies prospered, glass continued to be an expensive, hand-fabricated material which was subject to European trade restrictions and was relatively hard to come by.  Consequently, for the first 200 years, neither churches nor secular buildings in America featured ornamental glass.

RESIDENTIAL STAINED GLASS
It was the invention of the balloon-framing system for construction and the mass production of building materials made possible by the Industrial Revolution that brought about the explosion of architectural styles in the middle and late nineteenth century known today as Victorian.  The Victorian Period (1837-1901) corresponds to the years that Queen Victoria was on the English throne.  In the United States, it was a time when a wide variety of materials became available; new materials that could be swiftly transported by a growing network of railroads.  An amazing selection of architectural features and decorative elements were available for the ordering from popular pattern books.  The new residential architecture that emerged featured turrets, towers and windows in odd shapes and asymmetrical placements.  Fancy glass was a part of this creative surge. Such artistic expression quickly caught the imagination of a nation that prided itself on
individuality and innovation.

ABOUT THE EXHIBIT
The exhibit is located in two areas of the Mogan Cultural Center - the Immigrants' Experience of the Working People's Exhibit and the University of Lowell Center for Lowell History.  Within the Working People's Exhibit is a history of architectural decorative glass from its European traditions to its purely American residential stylistic examples.  Various types of glass are on display, along with the tools of the craft.  An actual window demonstrates the steps required to create stained glass, from design idea to completion, using the various types of glass: flashed, etched, sand-blasted, jeweled, and beveled.  Photographs of some Lowell homes and a sampling of fancy glass found from the Acre to the Tyler Park National Historic District demonstrate both street treats and hidden treasures.  The exhibit in the University of Lowell Center for Lowell History is focused on glass in Lowell.  At the peak of the Victorian era fancy glass was produced by studios all over America.  Although names like Tiffany and LaFarge are well-known today in association with the production of stained glass,their studios created only the smallest fraction of windows during this period.  Because commercial windows were rarely signed, it is difficult to document the names of the designers of most of the Lowell windows.  Two glass artists with close Lowell connections were Sarah Wyman Whitman and Almy J. Flint.

In this area is displayed a quilt which was created by Susan Powers of Ridgefield, Connecticut and furnished through the cooperation of The New England Quilt Museum.  It is an example of the Stained Glass Pattern.  Quilts and fancy glass have much in common.  Both begin with large pieces of various colors that are cut apart, juxtaposed, and reassembled to create original works of art.

A photograph shows early 19th century housing for workers of the Middlesex Village Glassworks.  The glassworks furnished window glass for many homes in the area and represents an important aspect of the Merrimack Valley's early industrial history.  The factory ceased operation before the Civil War.

The windows on French Street display fancy glass rescued from demolished homes across the country and are on loan from H. Weber Wilson.

The exhibit includes a list of one hundred homes containing fancy glass which have been located all over Lowell, along with an additional fist of homes featuring "Queen Anne" style windows.  A typical Queen Anne window has a large pane of glass in the middle surrounded by alternating colored pieces, usually primary colors, that are divided by wood mullions instead of lead.  These are all noted on the map of Lowell located in the exhibit.

The locating and cataloging of Lowell's fancy glass is an ongoing process.  These unique examples of a special art form are for everyone to see and enjoy; windows that make a statement about the builders of this city and the lifestyle of Lowell residents in the late nineteenth and early twentieth century.  If you live in a house in the Lowell area or know of other fancy glass examples, please contact Susan Scott at (508) 459-4760, so it can be added to the list of "Street Treats and Hidden Treasures." 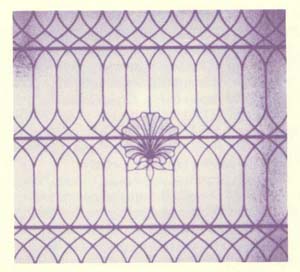 ABOUT THE PROJECT DIRECTOR
Susan Scott has been fascinated by fancy glass all her life.  After twenty-five years in Alaska she came to Lowell five years ago with her husband David Strohmeyer and fell in love with Lowell's beautiful homes and fancy glass.  She spearheaded the move to have Tyler Park declared a National Historical District.  Susan has a Masters Degree in Psychology from the University of Alaska.  She has served as a member of Lowell Historic Board and is a board member of The Lowell Historical Society.

In 1988 Susan Scott was awarded Cultural Program Support from the Lowell Historic Preservation Commission.  As well as researching and developing this exhibit, her project includes the identifying and photographing of some 100 Lowell residences, and producing a walking tour brochure of the Tyler Park area.  A slide-tape on Lowell's residential glass will be made available to school, community groups and cultural organizations.

EXHIBIT CONTRIBUTORS
The Project Consultant is H. Weber Wilson of Newport, Rhode Island.  He is the author of Great Glass in American Architecture.  The display window is by Bayer Glass Studio of Crawford, Colorado.  Photography is by Higgins & Ross, Celeste Hynick, J. T. Mulaire and David Strohmeyer

Whistler House Museum of Art
243 Worthen Street, 452-7641
"Glass Off the Wall" An installation of glass sculpture by Alan Klein. Also, the slide-show by Susan Scott "Lowell's Fancy Glass. "
Tuesday through Saturday; 11 to 4 pm, Sundays
1 to 4 pm